Classic Wind River climb! Incredibly consistent, classic, sustained (at the grade) backcountry climbing in the west. Classic enough that it made the 50 classicly crowded climbs book, so expect parties to be in the area vying for the early slot. Be prepared to start early anyway to avoid afternoon t-storms that one can't see until they come over the formation from the southwest. You'll see what the fuss is over, though, with the great views, exposure, and beautiful climbing that every pitch offers. Route finding skills will be put to the test in a couple key locations, and retreat after the first 300 feet will be a challenge.

Head up the 3rd class ramp that heads toward the sloping ledge system, traverse and/or downclimb to reach the ledge, thinking about the 2nd as you place gear. Belay just past the ledge where good pro presents itself in the left leaning ramp that leads to the dihedral with a prominent roof.

Climb the dihedral, either belaying below or after the roof.

Climb a long pitch, starting first right, then back left to a fun 5.8 crack and belay.

Ascend the left leaning system of ledges and dihedral cracks for at least 2 pitches (even with a 60m). The Kelsey topo forgets how long this section is. Going right early will end in a dead end.

Do finally head right with some spaced pro up the ledges until the 5.8 flare and 5.9 3" variation become unmistakable back to the left. Struggle up the flare to easier ground and belay left at the ledge.

Continue leftward, past a large flake and up to belay at the base of a crack leading to a chimney continue up or step again left and continue the crack system to for a long pitch and belay.

Head up to the base of either of two chimney systems. Another pitch up either of the chimney sections leads to the east ledges platform.

Another pitch awaits to the upper summit. Ascend to the top, then make a short rappel to gain the summit proper.

Walk/scramble over then down the 3rd class gully to the south to reach the South Face/K cracks rappels (two ropes recommended) 3 or 4 raps lead to the ledge that heads further left to the South Buttress descent.

Cirque of the Towers. Find trails at the north side of the lake at the base, hike left of stream into rock field and scramble left, left of the prominent base of a gently curving ledge that becomes a long dihedral ending at a roof. Rack up on the low-angle rock, then head left up the 3rd-class ramp. Don't be surprised if the start seems somewhat exposed as you head to the left. 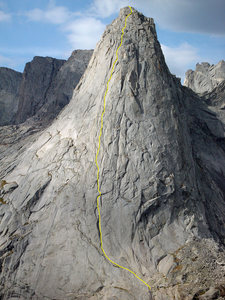 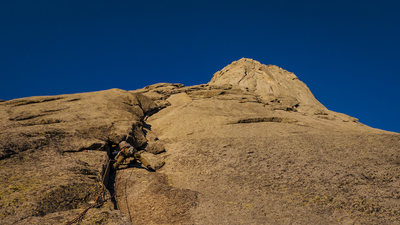 P2 - we climbed the face left of the dihedral t… 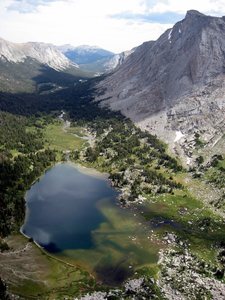 The view of Lonesome Lake from the Northeast Fa… 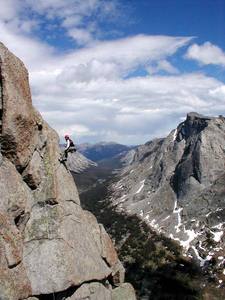 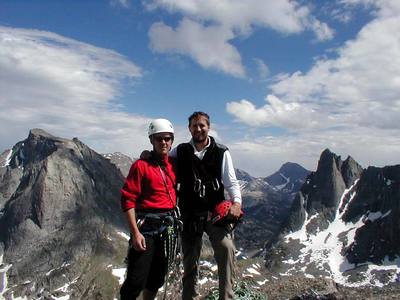 Summit of Pingora in June 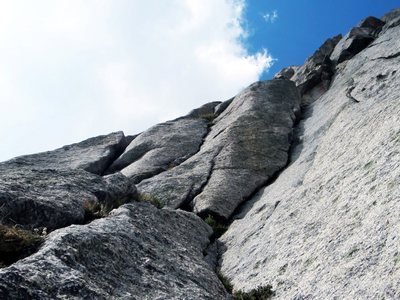 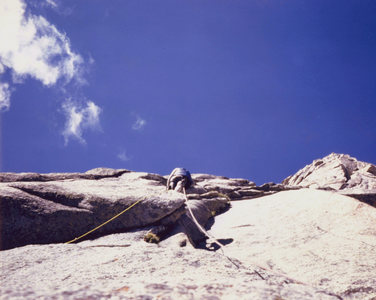 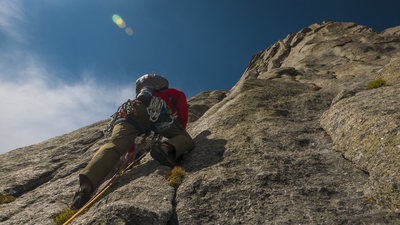 P6 - start of P6 with P7 off width visible above 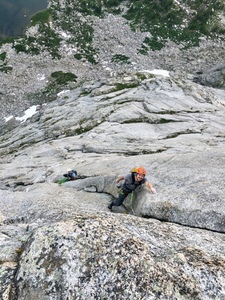 The knob hold around pitch 8 or 9. You gotta fi… 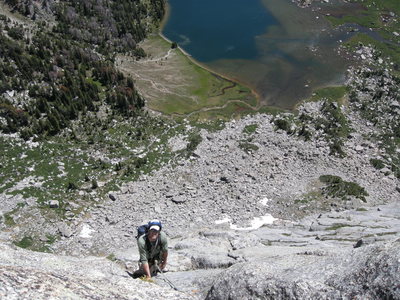 Looking back while on NE Face.