This is one of the three prominent, south facing formations of Southeast Central Vedauwoo. It's sunny most of the day. From a distance, it is easily identified as the big bulge separating Fall Wall from Walt's Wall. It is very steep, grooved with vertical water streaks, embedded with warts of foreign rock, split by cracks from finger size to some that can swallow you, and as a general rule, has a gnarly surface. Needless to say, both sport and trad climbs found here kick butt. Some of the routes are 'stuff of legends', and if you can climb them, you will probably become part of the story. Two routes, Silver Salute (5.13b) and Panther of the Weak (5.13a), have seen less than 4 free ascents, and the second pitch of 'Panther' has not seen its first. Maybe it's for you? Your endurance will be tested by the Fourth of July (5.12a, fingers and hands) and Horn's Mother (5.11a, offwidth). Space Oddity (5.12a) ascends an extremely impressive, steep slab on Coke Bottle Right and TM Chimney (5.7+) ascends the entire formation on the inside! How about that for contrast? Mainstreet, the 5.10a offwidth testpiece is located on Coke Bottle Right. So ask yourself, "am I up for the home of the hardmen?". If so, it's all yours.

Park in the Fall Wall Parking Lot, hike up to Fall Wall and look directly west. It starts with 'Coke Bottle Right', that ominous, steep slab that you are looking at - and continues around the corner. (As above, it separates Fall Wall from Walt's Wall.) You simply can't miss it 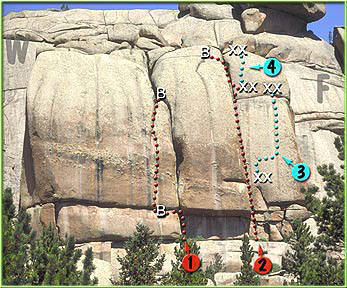 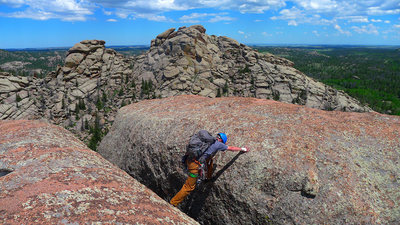 Bridging the gap to the top of the Coke Bottle.

All Photos Within Coke Bottle