The Woo is not limited to offwidths and other ripper cracks for that matter. The killer feldspar crystals embedded in the slabbier angles yield to amazing, intricate face climbing holds. This route is by far the most spectacular face route in the Woo that I have been on.

Begin by soloing up an EZ chimney and belly crawl (every route here has some weirdness) across a ledge to reveal two studded paths. The route out right is Young Guns, 13a... Both routes share the first bolt. Get psyched and launch off for 110' of sustained and devious crystal pimping....

The beta: do hard moves, clip a bolt and repeat for 12 bolts total. There are lots of tricky moves with a cruxy section along the way. AWESOME! 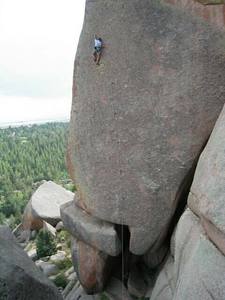