CRAG-VT has secured a parking lot for the Bolton Dome! Currently there is room for 12 cars. Turn onto Champ Ln. and the parking lot is immediately seen on the left. There are signs to show you where to park. From the lot, walk up to the cliff.

IF THE LOT IS FULL: Park on the SOUTH side of the road clear of any mailboxes and with all tires off the paved portion of the road.

Additionally, no dogs are allowed at Bolton Dome after a few incidents involving neighbors.

First two pitches are sport and can be climbed as their own sport pitches alone due to the Upper Dome Ledge. Be mindful to stay on mechanical bolts on pitch two and not end up on Fire in the Hole. If you're clipping glue-in bolts, you're about to climb 5.12.

Locate the right-most sport route on the Neighborhood Ledge.

P1: Climb a steep section with good holds to a small ledge before a tricky crux. Mantle the ledge to an anchor on the left side of the Upper Dome ledge. 5.9, 50 ft.

P2: Start up Two Times Infinity for a few bolts and then traverse hard left and up face climbing to an anchor at a small ledge. Don't get tricked into going straight up on the glue-in bolts of Fire in the Hole unless 12a is your biscuit. 5.10a 90 ft.

[NOTE: It is sport up to here. Pitch 3, while fun and worth doing does require gear. Most parties choose to rap from atop P2]

P3: Traverse the ledge around the corner to eventually meet up with the end of Seven Cruxes. Very cool position! 5.8, 70 ft.

To lower, either rap down the Dometop Wall with a 60-meter rope or rap down to the neighborhood ledge if you have a 70. Tie end knots, it's a rope stretcher. It is highly recommended to rap with a 70-meter rope as it keeps you clear of other climbers and is just a dandy fun rappel.

Start at the right-most line of bolts on the neighborhood wall.

The descent can be tricky so I thought it would warrant explaining.

One single rap off the left with a 70-meter rope. An AWESOME rappel.

If walking off, continue past the P3 anchors to sling a few trees and get to the top or pitch it out as its own pitch. It's 3rd/4th class climbing but with slippery leaves or any moisture it would be a fatal slip. 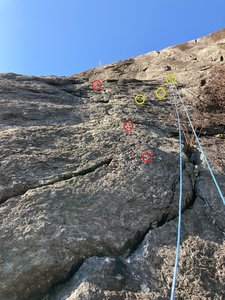 Make sure you go left! I'd suggest an extended… 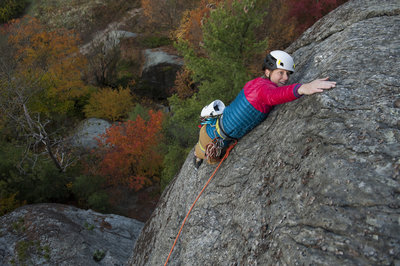 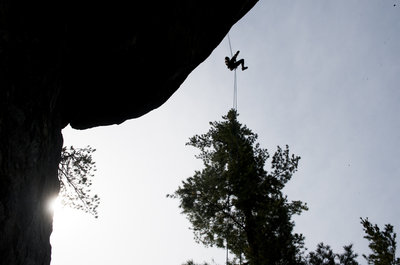 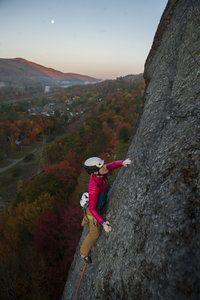 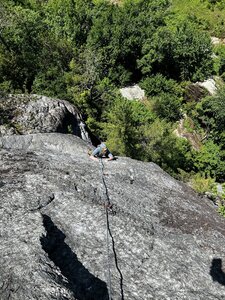 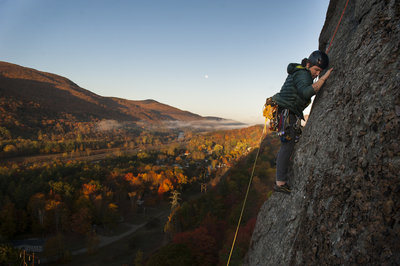