This is another bitchin and bold route on Moro's West Face that never gets done. Takes the center line. One of the best crack pitches on Moro and lots of face climbing on knobs that makes the rock so cool. Original rating was 10c.. which is a joke. 11b sounds right to me, but i dunno

P1) Head up the ramp of Pressure Sensitive a ways (easy 5th) and make a belay under the bolt of the next pitch.

P2) Carefully head up onto the steeper face and clip the bolt. Bust some big and thin moves right and up until you can reach some good knobs. Fall from this crux (V4?) is totally safe but a little jarring since you're off to the side of the bolt a good bit. Get some ok pro for a directional and traverse right to setup a belay in the bottom of the corner.

P3) 10d - up the beautiful, sweeping corner which reminded me of Rostrum's 10d corner, although this is longer and probably harder (and a bit dirtier, but that should go without saying considering the venues). Belay at the top of it at a single bolt and gear (#2 useful)

P4) 10d+ - up very runout but relatively easy terrain past 3 bolts. You're face climbing to the left of the corner. some gear can be had in a couple spots. Bolts can also be hard to spot. Crux is pulling over a bulge and comes at the 3rd bolt right below the anchor. It is well protected with an attentive belay, but is nails for the grade. awesome holds. 2 bolt anchor, sweet ledge

P5) 10a - Traverse left and up past 5 bolts and sweet crimps to gain a ramp. Follow this thing (easy) to its end where a 6th bolt will then protect a move out left. Up some cool corners to a nice belay ledge 20ft. below a huge ledge. finger size for the belay. 60m. Or got to huge ledge with a 70m

P6) up to the huge ledge which is where Levity's End comes in. Off the right side of the ledge is where the last pitch of that climb will lead to the top (5.8 r-ish). Alternatively, you can head a bit left and up off this ledge to get on the patio (an even bigger ledge) and, with tricky route finding, scramble to the top. Or climb one of a couple routes off the patio (enigma -10c -highly recommend) to get to the top.

P1/P2 note - there is an old bolt more directly below the main corner that is a possible way to access the corner. But the moves getting to this bolt and moving past it seemed much harder than the way described (which is 50 ft. to the left). The bolt protecting the way described was also old (but has been replaced). Not sure which way the FAists went. Likely they tried the straight up way then "bailed" to the left way

Start on Twilight Zone ledge which can most easily be reached by waking to the summit and then finding Modern Guilt and making 5 raps down it with one 70m rope. This will put you on TZ ledge. You can continue rapping to the ground and climb one of a few routes that lead back to TZ ledge or just climb Whistler. Once on the ledge, walk 100 ft. to the left of Modern Guilt and you'll see the big corner that is the meat of the route. The tops of the two routes are somewhat far apart though, so you might want to think about bringing shoes with you.

All bolts replaced with ASCA hardware. Take doubles from small to #3 and at least 1 #4. 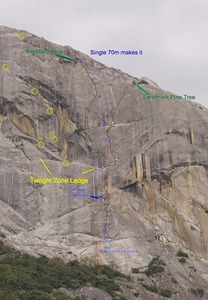 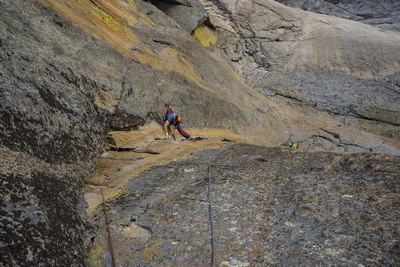 Coming up the corner 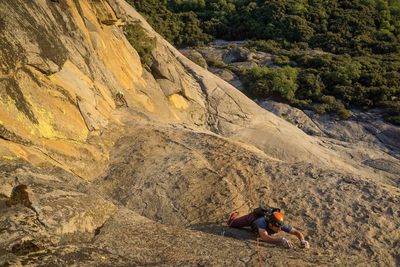