The Southwest Ridge of the Enclosure is a great route with awesome views to the west. There's some excellent sections of rock, some forgettable pitches, a bit of meandering, and, generally speaking, a lot of old school charm to this 1940's alpine classic. For a fast and efficient party these 11 pitches go pretty quick, simul-climbing where rope drag isn’t an issue. After the technical terrain is complete, a lengthy (and exposed) 4th class ridge scramble leads to the summit of the Enclosure. It is a good objective for ambitious parties seeking an additional route during a two day stay at the Lower Saddle. The profile of the upper portion of this climb can be seen from the bivy sites at the Lower Saddle.

*This route has a 5.9 variation to the start that appears to be quite good. For those who are interested, locate the crack system to the left of the "orange wall" at the base of the Southwest Ridge. This variation will intersect the original line somewhere along the large terrace on the P4 belay.

From the initial portion of the Valhalla Traverse, scramble up 4th class slabs and 3rd class scree fields for 15 minutes or so to reach the base of the route.

P1-P2. Generally speaking, following the large ramp/weakness in the prominent system on the southern side of the arete/ridge. Easier 4th class scrambling leads to a steep section of jamming on the right side of a prominent flake (5.7ish). Continue up the crack system/corner, eventually passing an old ring piton, and pull through another steep bulge on hand jams/jugs on the face (5.7ish). This section can be broken up into two pitches or combined into one lead with a little bit of simul-climbing.

P3-P4. From the comfortable belay stance above the steep 5.7 bulge, avoid continuing up the easier, low angle ramp directly ahead, and quickly move left into the first prominent weakness/chimney system that accesses the ridgeline proper. This is another rope stretcher or two pitches, ending in some loose, low 5th class terrain that deposits you on a large ledge/terrace (described as P4 belay in the Ortenburger-Jackson/Gams guidebooks).

There is definitely some fuzziness in regards to the details of this lower portion of the climb; many belay options exist. Basically, pick the line of least resistance and eventually move into the first left-angling weakness that doesn't appear to be overly difficult.

P5. This is a fairly short pitch. Bump the belay to the far side of the terrace, then climb the cleft/chimney in the next prominent high point in the ridge. Start up the chimney, then move left onto the face (fun 5.7ish). Belay in a notch in the disintegrating black rock cleft/gully above.

P6. This is another short pitch that is hindered by rope drag, described as a "5.4 traverse on a red rock face" in the Gams guide. Pick your way along the path of least resistance, moving up and right along a hand traverse below a massive overhang. This pitch culminates in an awkward (and surprisingly difficult) down climb to the other side of the major break/notch in the black rock gully/notch. Be sure to protect your follower for the down climb and belay on a large ledge shortly afterwards.

P7-P9. Many belay options exist for this sizable stretch of the route, but basically cruise up easy, loose 4th and low 5th class terrain, trending left toward the ridge line proper. (5.6ish). Once you encounter a large ledge on climbers left, move along the terrace and belay below a wide crack.

P10-P11. Climb the 5.7 wide crack straight up the face, eventually making some awkward moves right around a small bulge/chockstone, then continue into easier terrain above (5.6ish). Belay or simul until the terrain eases at the top of the ridge line leading toward the summit of the Enclosure.

P12+ Most parties will probably jettison the rope at this point, but be advised that there are many exposed sections of 4th class to reach the summit proper. It's about a 10-15 minute scramble to the top.

From the Lower Saddle, complete the initial portion of the Valhalla Traverse. Drop down the first major drainage, then climb up the scree field leading to the southwest ridge of the Enclosure. Scramble up more 4th class slabs/3rd class scree to reach the base of the climb. Roughly 45-60 minutes from the Lower Saddle.

Single rack to #3 with some stoppers, perhaps some doubles in the .5 to #1 range. Shoulder length runners. 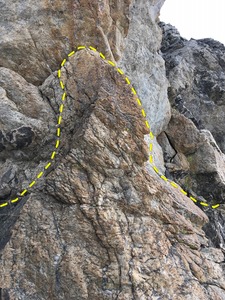 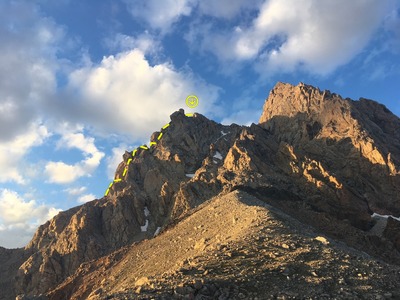 The Southwest Ridge skyline from the Lower Saddle 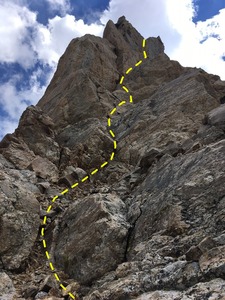 Southwest Ridge of the Enclosure