The Black Ice Couloir is the Teton's most renowned alpine ice route, a compelling mountaineering challenge that in recent years has melted out and reformed, depending upon weather and seasonal precipitation, more than once. It's first ascent represented a significant step up in American climbing, and in the ensuing years it has attained classic status. Though Swedlund and Jaquot chopped steps through some of the upper part of the route, nevertheless, this was a bold effort and opened the door for further development on the wild side of this iconic peak. There are rock pitches in addition to approximately 1,200' of alpine ice, with a short crux of 70 degrees. (At this time MP provides only the option of rating ice on a "Water Ice" scale, i.e. "WI3". Water ice can and does occur on the BI, but it would be more accurately rated on an "Alpine Ice" scale.) Rock pro to the side of the ice is available, along with ice gear if one chooses to carry the latter. Many parties find comfortable pro with rock gear. The very real rockfall danger is most serious in the lower portions of the route.
Considerable thought should be given to conditions on the upper mountain as well as temperatures at various elevations. Generally, the best conditions occur in the latter part of the summer, after the snow has consolidated or sloughed off and freezing temperatures are observed above 11,000 feet. Both natural and manmade rockfall is possible, with parties on the Owen Spalding directly above the route. Winter, spring, and late autumn can alternatively offer favorable conditions. In essence, any time, with the possible exception of early to mid-summer, could offer reasonable conditions, and good alpine judgement will determine the correct course of action.
Even in recent years, when reports have indicated that the route no longer existed, it has received spring and winter ascents, underscoring the elusive nature of "good conditions" and the vagaries of alpine ice in the 21st century. Ask for an update from the Jenny Lake Rangers as well as local climbers, examine recent weather patterns, and then make your own call. It's not a bad idea to have an alternative route in mind so that, once around the corner of the Northwest Ridge, you can complete a successful climb if prudence dictates bailing on the Black Ice idea. The Northwest Couloir is an excellent alternative, among several.

Perhaps the crux routefinding issue will be successfully completing the Valhalla Traverse in the dark, almost mandatory as you'll want to be well established on the climb as early as possible. A conspicuous cairn on the skyline of the Southwest Ridge, visible from the Lower Saddle, marks the Traverse and its continuance across the West Face of the Enclosure on obvious easy ledges There is nothing technical until turning the corner onto the north side of the NW Ridge. At that point, it's all serious terrain with considerable exposure.
Getting to the aforementioned cairn is tricky, as one must cross several gullies and small ribs moving from the L.S. to the SW Ridge. A scouting mission the evening before might be in order. More detailed information on the Traverse can be found in the indispensable A Climber's Guide to the Teton Range, Ortenburger and Jackson.
Once around the NW corner, follow rotten ledges until the peak is fully visible, then aim for the base of the main icefield below the upper West Face. Ledges and short headwalls, the last one involving some awkward 5.6-7 on uncertain rock brings climbers to the start of the ice. From here, the number of pitches will vary greatly, depending upon rope length, party stamina, belay choices, and other specifics of each party. In general, expect about 8 pitches, hugging the wall of the Enclosure on the right. The route steepens with each rope length, with the short crux coming as one enters the final, most narrow portion of the route.
Finally, attain the Upper Saddle and the end of the Black Ice. To continue to the summit use any of several routes that start from the Upper Saddle. Or, descend via the OS.
Consult the accompanying photo for additional perspective. Expect an adventurous day. The further one goes, the less pleasant becomes the prospect of retreat.

A standard rack to 3" cams will do. There are occasional fixed pins along right wall and belay stances are at the discretion of the leader. The rock will not win many fans. 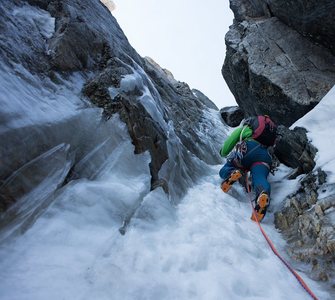 The ice crux on the BIC, about 60 meters below… 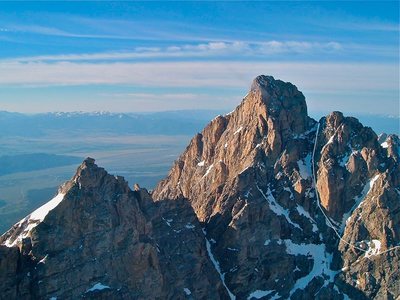 A view from the north, showing the approximate… 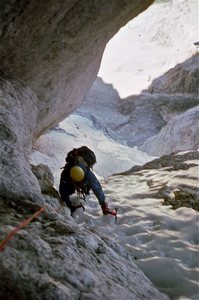 Chuck Crago exiting the crux of the Black Ice,… 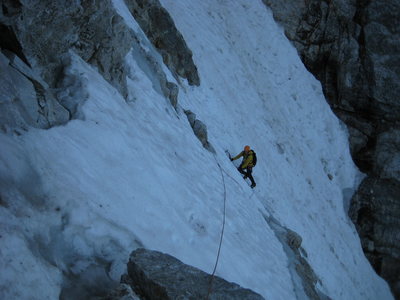 On the Valhalla Traverse 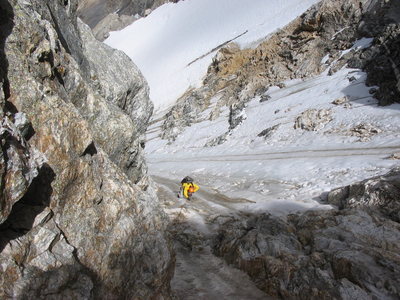 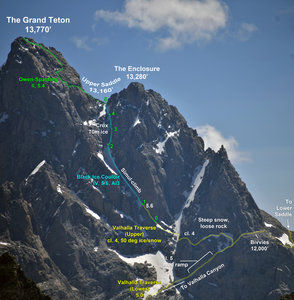 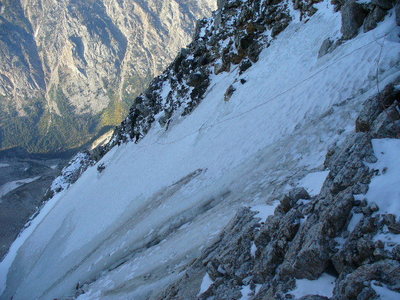 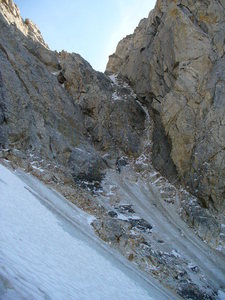 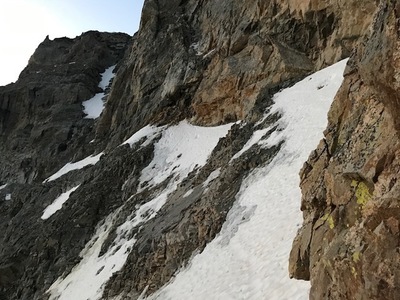 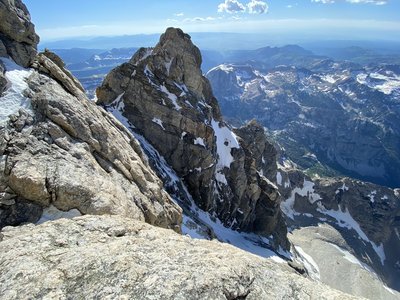 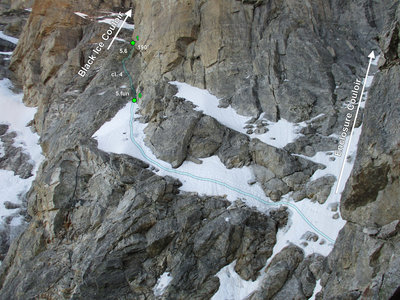 The last part of the approach, from the Enclosu… 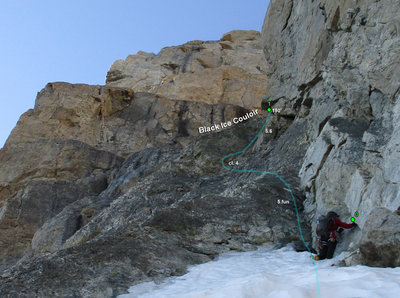 The first roped pitch of the Black Ice Couloir,…