A fun jaunt to the second tallest summit in the Tetons.

Named for the curious structure mentioned by Langford during the first documented ascent, the Enclosure is a worthy outing either as a primary objective or as a combo with a climb of the Grand Teton.

Good poor weather option if the Grand has spicy conditions or the forecast doesn't support a longer roped climb.

In early season, the south coulior can be followed all the way up from Dartmouth Basin or from the lower saddle staying left of the rib which separates the south coulior from the Exum gully.  Take care as the snow can get steep and any exposed rock steep and somewhat loose depending on the chosen line of ascent.  An ice axe, campons and the knowledge of their use would be prudent.  But, really, most climbers just use the O-S approach.

To descend, reverse the route.

Most start at the Lower Saddle.  Follow the approach to the Upper Saddle described in any Owen Spaulding route description.

For an early start, especially if a summit of the Grand is dashed by a forecast of an early summer t-shower, scouting the trail from the Black Dike through the eye of the needle in the daylight prior to the day of the climb is a really good idea.

Most folks solo or will have a light rack for a day on the Grand. If the correct route is chosen, most won't deploy a rope or gear to ascend the Enclosure via the South Coulior via the O-S approach. 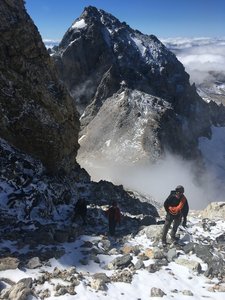 Coming up the OS gully just before Enclosure 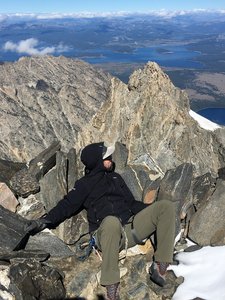 From the summit of Enclosure 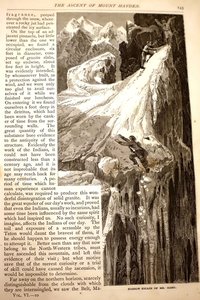 Langford's description of the Enclosure. The A…