Alberich's Alley is a fairly elusive line and may be difficult to catch in prime condition during any given year. With that being said, it is well worth the effort. This exceptional ice and mixed line is a steeper, more difficult variation to the infamous Black Ice Couloir. It branches off near the base of the West Face (approximately 600' to the Upper Saddle) for an arguably better finish to the standard route.

Like many other Teton's ice routes, the difficulty of this line is highly dependent on a number of factors, including the time of year, recent precipitation, nighttime temps, etc. The original rating given in the Ortenburger-Jackson guide is IV, AI4, 5.9 and may be more accurate for a "normal" season when the ice is leaner. However, on the 4th of July, 2018, this route was in incredible shape! We found the overall rating to be more like WI4- M4 with the crux being a chockstone-bulge on a thin WI4- slab on the second pitch.

Overall, Alberich's Alley is highly recommended! Those who are interested in this variation could examine the amount of ice on the lower pitch while ascending the lower Black Ice Couloir and decide whether or not to proceed.

Complete the Valhalla Traverse. Move below the Enclosure Ice Couloir, past the Emotional Rescue Buttress, then ascend the first pitch of rock (or mixed rock and ice) leading into the Black Ice Couloir. Blast up the first 600-800' of the Black Ice. At the prominent "bowl" feature below the West Face, trend left to a pin anchor on the wall below the prominent left "fork" in the steeper terrain above; the lefthand fork is Alberich's Alley. The righthand fork is the BI proper.

P1- A narrow ice runnel/chute leads past a few fixed pitons to a steeper bulge of ice (WI3+). Continue up the snowy and icy weakness to an obvious chockstone. Tunnel under the chockstone then stand on top of it and set up a belay.

P2 - Continue up the slab of ice covered rock above. The Ortenburger-Jackson guide states, "Continue up and slightly left on very steep ice and rock (5.9) toward the giant jammed chockstone. Climb from under this huge boulder on thin ice..." In 2018, this section was bomber WI3 terrain leading to a thin, cruxy section below the chockstone that protected okay with a stubby screw in stellar ice (WI4- PG-13 for about 20 feet).  Above this crux continue up ice and snow toward another obvious chockstone-tunnel. Belay at the chockstone, or if you are wondering whether you'll be able to squeeze under that thing (as we were) then trend right to a belay stance up and right of the chockstone-tunnel. This belay seemed better anyway since you don't shell your belayer with ice and snow while leading the final pitch.

P3 - Traverse back left to regain the icy weakness above the chockstone. This involved a few rock climbing moves, M4ish kind of shenanigans. A mixture of ice, snow covered rock, and mixed terrain leads directly up to the flat ground of the Upper Saddle (approximately 100-200' up and left of the top out for the Black Ice Couloir). Belay at the exposed "boulder problem/downclimb" leading up the base of the OS rappels.

From the Upper Saddle, continue to the summit via any number of options, or if you've had your fill, descend back to the Lower Saddle.

Approach via the Valhalla Traverse and begin on the Black Ice Couloir.

A handful of screws (mostly stubbies) and a single rack; possibly a few pins 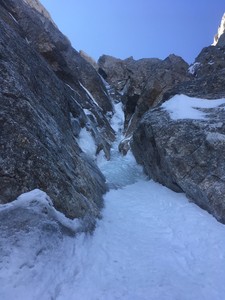 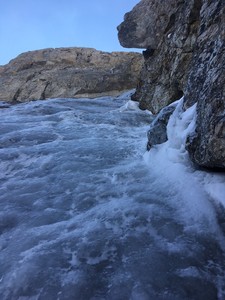 Looking up the second pitch from the P1 belay,… 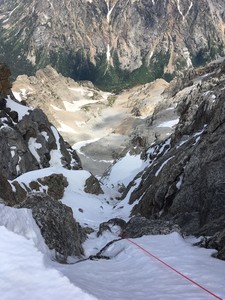 Looking down P3 from the Upper Saddle (July 4th… 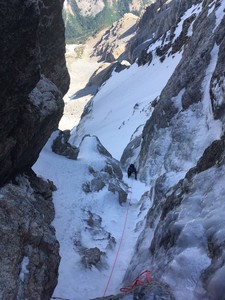 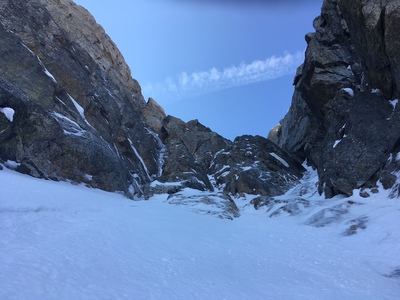