While this ridge climb is relatively short and without much in the way of technical difficulty, it follows solid rock and is in a breathtaking position with views of Buckner, Boston, Sahale, and Johannesberg during the climb, then a 360-degree summit panorama adding in Forbidden, Eldorado, and a sea of other peaks further away.

P1: From the notch, skirt the ridge to climber's right on large blocks, then follow a dihedral up a couple moves to the ridge and a belay.
P2: Follow solid rock on the ridge proper with good gear.
P3: Scramble at or slightly right of the ridge to the summit.

To descend, scramble back to the top of pitch 2, rap that pitch, then scramble over to a large block above the notch and rap again.

From the end of the approach at the notch, gain the ridge on P1 and stay on it from that point to the summit. 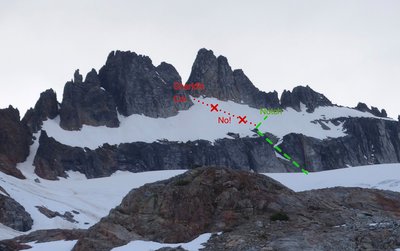 Approach as viewed from base camp. 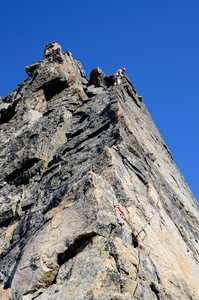 Nearing the top of P2