The Southeast Face of Sharkfin Tower has solid granite, fun moves, and an unbeatable position.

P1: Step onto a detached block, then work up a widening seam, starting with fingers, then ring-locks. Protection is good once the crack gets wide enough for fingers. The seam zig-zags a bit, just left of the arete. Follow it to the two-bolt anchor in a notch on the ridge.

P2: From the bolted belay, traverse left past two bolts and then choose your own adventure on the face. Gear is somewhat sparse and often best in thin cracks or horizontal seams. The upper section has more lichen and will be better if it cleans up more.

To descend, follow the beta for the Southeast Ridge.

On the clean Southeast Face of Sharkfin Tower, visible from the notch at the base of the Southeast Ridge. Climb the first two pitches of the ridge and find a fixed anchor to rap from. Make two 75' raps, keeping in mind the notes from the section above on protection with respect to anchors.

Single/light rack with gear to 2" and some runners.

A fixed anchor exists at the top of the route. Rap from this or build your own anchor to rap from since you'll be back. There is a two-bolt belay at the top of P1, but there are no chains or rap rings, so you'll leave gear here to rap down to the base of the climb. There is no anchor at the base of P1 (a bolt with no hanger exists), so build your own anchor for the belayer here. 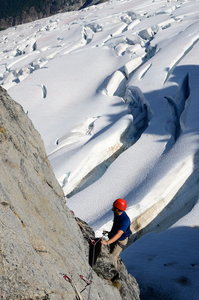 Sweet position at the belay on top of P1 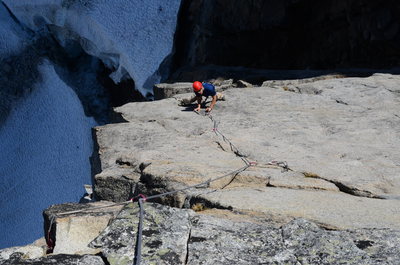 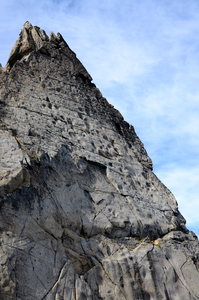 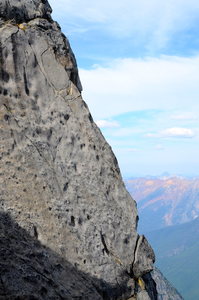 Pitch 1, going from below the detached block to…