The Sequel is a great moderate climb that you won't have to wait in line for. It follows the huge left-facing corner just uphill from Braille Book. If Braille Book looks like a cluster, just keep walking. The Sequel starts off a big ledge that is accessed from above. Some bushwhacking is required on the final approach, so stash whatever you're not bringing on the climb out in the talus, before the going gets tough (or you'll end up doing the bushwhack thrice). Faster parties would do well to link this climb with another of the shorter routes on HCR, or a route on HCS.

The rock at this end of Higher Cathedral is exceptionally featured with diorite knobs. Unlike most chimney climbs in the Valley, you're not using pure oppositional force on glassy rock the whole way up. It's more like the chimney climbing in Red Rocks, where half the time you're just face climbing up one of the walls of the chimney. It's a pretty unique climb on very solid rock that's surprisingly clean given the lack of traffic. The climb receives morning shade, then a bit of sun in the late morning/high noon before the whole wall goes into the shade in the afternoon.

You can start by just climbing fun knobs on the wall outside the chimney. After 40ft or something, the features get smaller and you'll want to enter the chimney. Stem and chimney your way up for a full ropelength. There's a bit of 5.7-5.8 stuff towards the end of the pitch. Belay at a stance in the far back of the chimney. There are a few nuts behind a chockstone and you should back this up with a biggish cam (3-4") in the crack.

The second pitch climbs a steep and flared squeeze chimney (5.7). There's occasionally a good placement for nuts or small cams in the various cracks you'll find on one of the walls of the chimney. But if you want to really sew-it-up you'll need some 6" (or bigger) gear. At the top of the chimney climb out the right side to a ledge. You can set a belay here or continue up a fist crack off right and then up the face on big knobs. Belay at a large ledge.

The final pitch is shared with Braille Book and most other climbs in the vicinity. There are a variety of ways to go. My favorite is to scramble up and left, passing a triangle overhang on its left side, and then ascend straight up the remarkable headwall on bucket-sized knobs and flakes. Some of the most fun 5.4 jug-hauling you'll ever do.

To descend, follow cairns and a climbers trail south-west through brush, and then contour to the left, descending open slabs. This leads to a short 3rd/4th class gully (just two downclimbing "boulder problems") after which you will be back at the top of the Spires Gully. 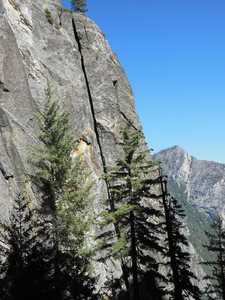 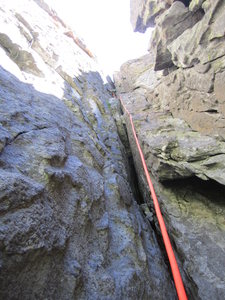 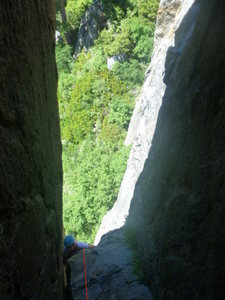 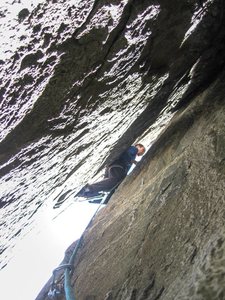 Crux pitch, which was 3rd pitch for us, since w… 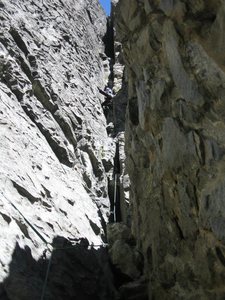 First pitch of The Sequel 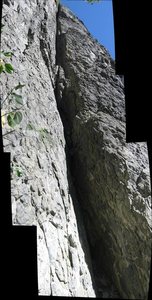 The Sequel from the ground up. 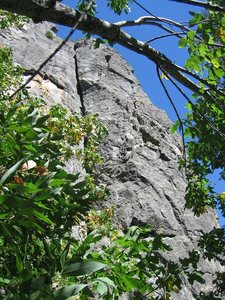 The Sequel from its bushwhack approach 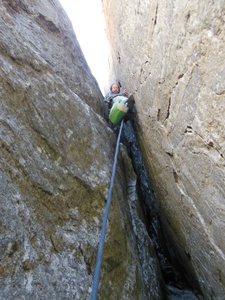 The flared squeeze crux at the start of pitch 2.

More About The Sequel