All Along the Watchtower

The route is s serious undertaking and was cutting edge at the time of ist F.A. It ascends a prominent line up the left side of the west face. Start from ledges where the lower wall sticks furthest into the glacier.
P1-P9 Mostly 5.9 and 5.10, following cracks and dihedrals up the lower angle portion of the wall. The second will probably have to carry the bag in this section. There are very few substantial ledges here.
P10-p13 The climbing starts traversing slightly to the north and angling for the promenent, northwest facing, white dihedral. SOme descriptions have mentioned snow in this area and water seeps, but don't count on it. We found no water for the entire length of the route except in the crux!
A good bivy ledge (level for 4 people) exists just below and to the north of the dihedral. Its about 40 ft. left of the route and easy to get to.
P14-P22 This is the business. Climb the dihedral using mostly flaring finger size pieces. As the corner faces northwest, its not until mid afternoon that you are in the sun... in other words, if you want to free climb you better be real good at climbing in near freezing temps. Most of this corner is hard 5-10 to mid 5.11. Belays are where you choose to put them. The crux (C2), which goes free at 5.12, is where the corner jogs left and makes for and underclingy/roof sequence. Watch the drag. After this the conrner continues at 5.10 for a few more pitches. There are no ledges, and really no stances, in this section of the wall.
P23-32 The angle drops off and you follow the summit ridge. The climbing is usually 4th class with the odd 5.8 move, making hauling impossible and ropeless climbing dangerous. THere can be snow up here (adding wet feet to your woes). Bivy ledges abound, but are mostly uncomfy. We ended up sleeping just under the summit.
Rap a series of 5 or 6 rope the nghts down the east face. Lots of incredibly lose rock here. Then just walk out on the glacier... dont fall in a crevasse.

The route is on the west face of North Howser Tower, It ascends the lower apron to a prominent dihedral, then the summit ridge.
We accessed it via the East Basin Camp. Hike up the ridge towards the middle tower, traversing a snowfield to the higher ridge that looks down to the base of the North Tower. We built rappels here and did 4 full length raps to reach the glacier. Once there you have to traverse across the cirque to the base of the wall. There is a lot of rockfall on the rappels and then a lot of rock coming down into the cirque from the portion of the North face that is above... go fast. The route starts from ledges above the glacier below the most prominent portion of the lower apron.
Rappel the east face route. The stations vary from pins to slung horns and move periodically. Good luck.

Two sets of friends .5 to #4, 1 set of stoppers with extra mid size (offsets are good), a few sets of mid size tcu's or offset aliens would be useful in the dihedrals, a few micro cams for the crux.
Bring lots of slings for the lower portion. Bivy gear, snow gear to get to and from the route, two 60 meter ropes. 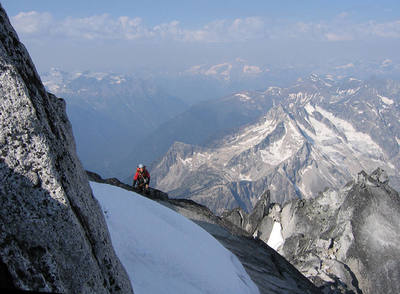 Hans Johnstone on the summit ridge of North How… 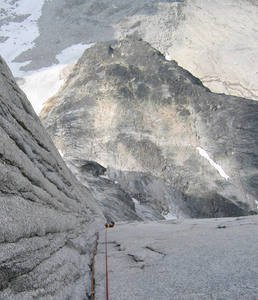 Looking down the corner and the wall to the bel… 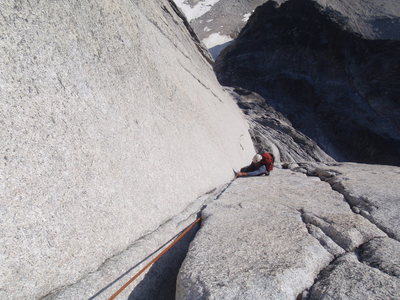 THE corner, in the setting sun. 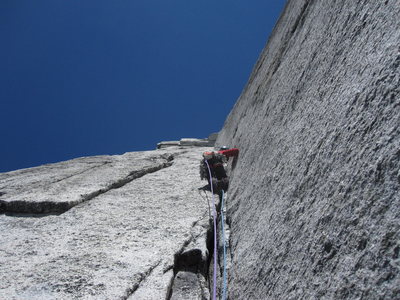 Truly amazing position and climbing. One of th… 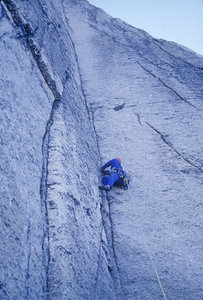 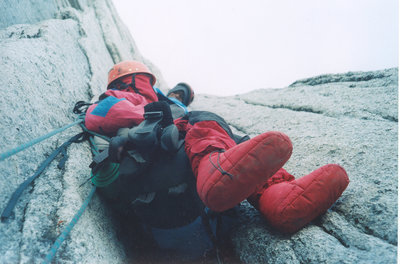 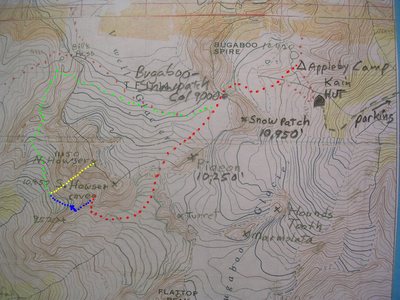 All Along The Watchtower Red - Bugaboo-Snowp… 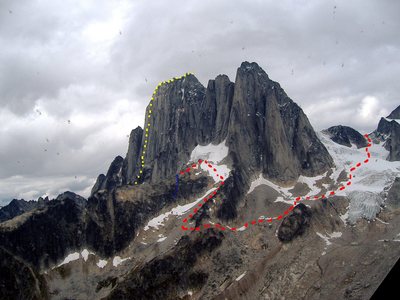 All Along the Watchtower, North Howser Tower P… 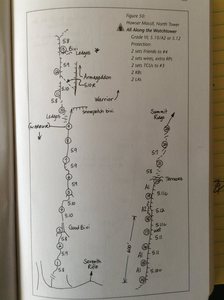 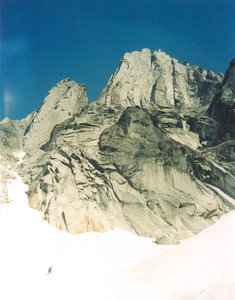 North Howser Tower from below 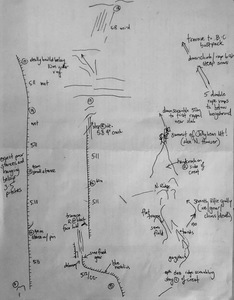 The best topo of the Watchtower by Jenny Abegg,… 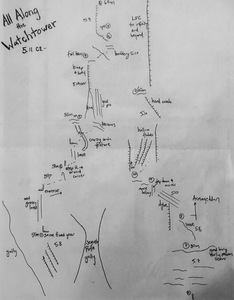 This topo by Jenny Abegg was incredibly helpful…

More About All Along the Watchtower