This page is far from encyclopedic. Though I will be updating it with some topos based on photographs that I took there, I was not able to thoroughly document all of the crags during my short stay in the area. I am hoping to return in the near future, but I had to supplement my knowledge of some crags with information from some Chinese guidebooks, which themselves could benefit from more development; the guidebook which I have listed at the bottom of the page is a nice start if you are just arriving to Guoliang for the first time. However, the book quickly becomes frustrating because of its lack of specificity and low-resolution, black-and-white visuals. My goal is to get people psyched to explore this region of China. There is more than a lifetime's worth of unclimbed lines in this area alone! If the climbing community can get more folks out to the region to climb and interact with local climbers (there are groups of homegrown climbers coming from the nearby provincial capital Zhengzhou), these kind of constructive practices will lend themselves to building a stronger, far more comprehensive knowledge base about climbing in Guoliang and, more broadly, China.

I wanted to get this information out into the climbing community in order that people can get a climpse of some of the great climbing China has to offer. There are so many new places to climb in this country, and those places simply have not proliferated widely. I hope pages like this encourage more climbers to get out there and explore these areas, and I hope those climbers can contribute to this expanding knowledge base.

When most climbers think about mountains in China, they instantly conjure up images of the High Himalaya, Tibet, Xinjiang, and even the remote Chang Tang Plateau. Mountains like Everest, Makalu, and Muztagh Ata and crags like Yangshuo are such well-worn destinations for climbers and hardened mountaineers. That being said, not nearly as much thought is given to the east of China. Of course, the mountains are smaller, but they do house some hidden gems that many a climber would be thrilled to find.

The Wanxian Mountain region of the Taihang Mountains is just that kind of hidden gem. The entire Taihang Range is about 400 kilometers running north to south and has an average elevation of 1500 to 2000 meters, the highest point being Xiao Wutaishan (2882 meters) in Shanxi Province. The Wanxian Mountain region is found in central Henan Province, a stones throw away from the provincial capital of Zhengzhou. Given the fact that train and bus access to the region is fairly easy from places like Shanghai or Beijing, access is not a problem, though if you go during Chinas National Day holiday (the Chinese version of Independence Day), prepare to be gawked at by Chinese sightseers when you climb.

What makes this range unique is not its size, but its geography (and geology). When you arrive in Xinxiang (the jump-off point before taking buses), you might very well be greeted by flatlands and Chinese smog. However, after about 1.5 hours on the road, you will have craggy ridgelines and incredible cliffs rising up around you. The very special feature of this area is the geology. When you enter the park, you will be traveling beneath 100-200 meter sandstone cliffs. Atop the cliff is a broad plateau on which there are some villages and even farmlands. What is even more incredible is that from the back of the plateau rise more mountains. Many of these mountains summits are guarded by sheer cliffs requiring technical climbing from every possible angle of approach.

According to the placards and signs I read, this area of the Taihang Mountains, especially the cliffside village of Guoliang, is steeped in some interesting political history. The village itself was settled by a small minority (unclear whether ethnic or political) group over a century ago as they fled persecution in the nearby city of Kaifeng. Fleeing into the Taihang Mountains, these people eventually settled a virtually self-contained village atop the cliff, Guoliang. The story has it that the only way to access the village was via a small two-foot wide series of ladder rungs that snaked their way to the top of the cliff. Who knows? Maybe they were the first Chinese to set up and regularly use via ferrata! Apparently, the people of Guoliang lived a fairly isolated life until the threat of persecution lifted in the mid-20th century.

Like many beautiful scenic areas in China, the potential for big tourism dollars became more apparent, especially as China opened up to the international community in 1979. The residents of Guoliang soon became aware of this potential and wanted to establish a more firm connection with the rest of China at least with people at the bottom of the cliff! However, the local government refused to fund a public works project to build a road to the top of the cliff. Of course, a bunch of locals trying to do such a task would seem like a Herculean feat! In the end, the local work ethic prevailed when a bunch of locals came together to pool funds for a road. More specifically, they purchased dynamite and lots of it. What resulted was a massive project of blasting into the cliff. The end product is not your standard roadcut into a mountainside. This tunnel, the Guoliang Tunnel, is quite literally a giant hole into the side of the cliff; it does not have a constructed interior tunnel shell or infrastructure. What you see around you is the actual cliff itself with a pretty simple concrete road.

Today Guoliang and the Wanxian Mountain area is a big destination for Chinese tourists, especially around 国庆节 (Chinas Independence Day). That being said, it is one of the few national parks in China in which climbing has also become a officially sanctioned activity within the park borders. So the good news is: there is basically NO RED TAPE when it comes to climb. You can make much like we did: enter the park (park entrance fee involved) and GO CLIMBING.

Since it is the Wild East (and by that I mean China in general), camping regulation isnt something that is heavily enforced. I have heard of laws on the books that prohibit camping in certain regions. That being said, it seems that as long as you are not encroaching on someones property, no one will realy bother you.

In the case of Guoliang and the Wanxian Mountain Park, camping gear can be a burden. There is an endless number of hostels and hotels all over the area, especially in Guoliang and Nanping. Even though everyone you meet in the area is friendly and accommodating, some climbers might not feel comfortable leaving a bunch of their gear in an area where there is no tradition of doing such a thing. Therefore, you might want to save yourself the weight and bulk by just bringing your climbing gear and spending the nights in the villages. Reservation are not really a thing, so you can just roll up to a hotelthey are often restaurants, tooand ask if they can rent you a room.

Aside from the park entrance fee, there is not much in terms of red tape. It's a combined 120 RMB (~18 USD) for the park ticket and 3 bus rides.

My mantra for climbing in China is always:

Respect the locals, patronize local businesses, and help clean up the area.

Since this park is also a big tourist attraction, trash in some places can be a problem. Thankfully, most of the crags are remote enough that trash is not a chronic issue. However, trash is a problem closer to the population centers within the park. Keep this in mind. Just be aware of it, and dont let it ruin your climbing experience. Climbing in and around Guoliang deserves more recognition because the area definitely makes it a must-climb destination in Chinas eastern region!


NEW IN 2014: Some dedicated expat climbers have put out a new, comprehensive guide book called CLIMB CHINA. Possibly the best, most detailed guidebook to hit the market on Chinese crags to date. Find it here: facebook.com/pages/Climb-Ch…

- Climb Dali: climbdali.com/html/Climbing…
Although Climb Dali is based out of western Yunnan Province, the proprietor, Adam Kritzer has this page that has a good overview of many of the emerging climbing areas in China. facebook.com/pages/Climb-Ch…

There is a myriad of ways to get to Guoliang and its surrounding areas in the Taihang Mountains. The cheapest choices are by bus and by train. The Chinese rail system is quite comprehensive and hits a lot of the major inland cities. If not, the nearest city is usually connected by another bus line. Chinas high-speed rail has also become quite developed along major travel arteries and fortunately, routes like Beijing to Xinxiang (your jumping off point for the mountains) have high-speed rail.

From Beijing take a (high-speed) train to Xinxiang (新乡)(Helpful hint: On train tables/ticket service listings, high speed train numbers are always preceded by D or Z, slow trains by K or T. Local trains will have NO letter in front of it. Do NOT take a local train unless you want to possibly triple your travel time.

If you take the high-speed train from Beijing, you will reach Xinxiang in about 5 hours. From the station, you can try to find a bus at the station that goes to Huixian (辉县), the next and final proper city before heading into the mountains. Alternatively, you can catch a local bus if you leave the station, hit the first intersection and turn left onto Freedom Road (自由大街). Across from a big mall, which has a big open plaza at the entrance, there is a local bus stop. Wait there and board a bus headed for Huixian (some buses will actually have the final destination posted on the front window, so pay attention).

Upon reaching Huixian, you will be dumped off at yet another bus station. There will generally be ticket people under a small pavilion. Tell them you want to go to Guoliang （郭亮), and you should be able to get a ticket for 15 RMB. Avoid trying to hire a driver because, unless you are a fierce negotiator, they will way overcharge you for this trip.

This final bus will bring you to the Wanxian Mountain Park entrance gate (it is a national park after all). To get into the park:

Buy a ticket from the entrance station. It should be 80 RMB to enter and 45 RMB for the bus card, which is valid for 3 individual bus trips, which is quite useful for traveling to the different crags in the area.

This might seem a pain for access. While more secretive ways to enter the park may exist, such behavior will not be good for future access to climbing in the park. When you do the math, the entrance fee and bus tickets come out to less than USD 20. In fact, it is almost the same price as a single day pass to access the Gunks! 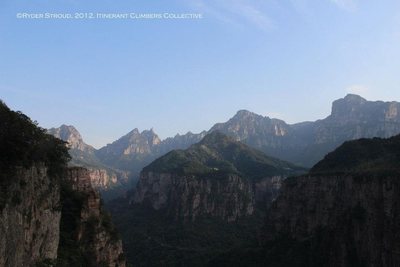 The view of the Wanxian Mountain region from th… 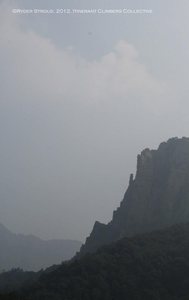 A knife ridge along part of the cliffs. Could m… 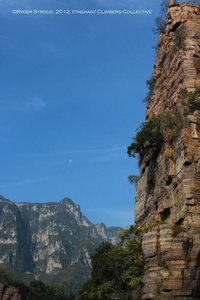 Youyifeng in profile with the moon behind.

Mountain silhouettes through the haze in the Wa… 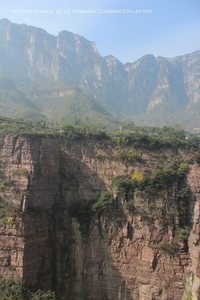 This photo is indicative of the bizarre geology… 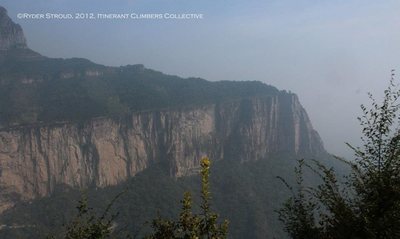 Looking down the cliff towards the "Tunnel Wall… 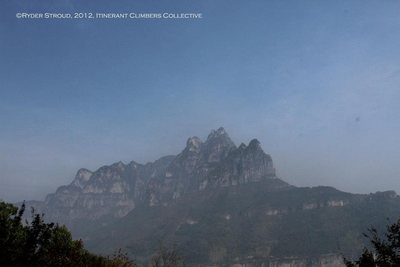 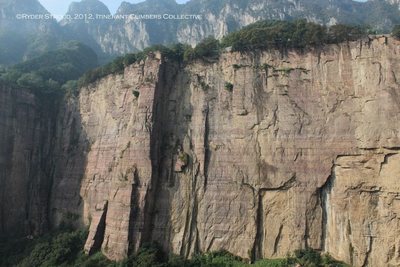 A shot from the B-section wall ("Battery Wall")… 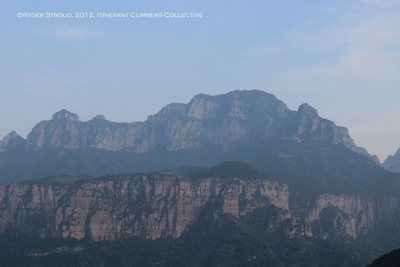 A view of the bizarre geology of the Wanxian Mo… 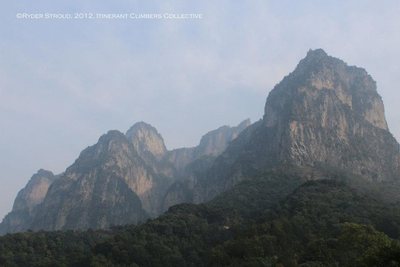 Some of the technical peaks that loom over the… 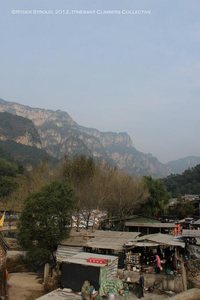 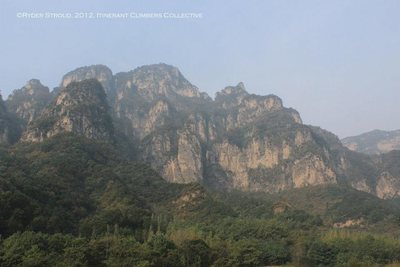 Some of the unclimbed faces that can be seen fr…

All Photos Within Guoliang