The Peaks of the Mulvey Lakes Cirque 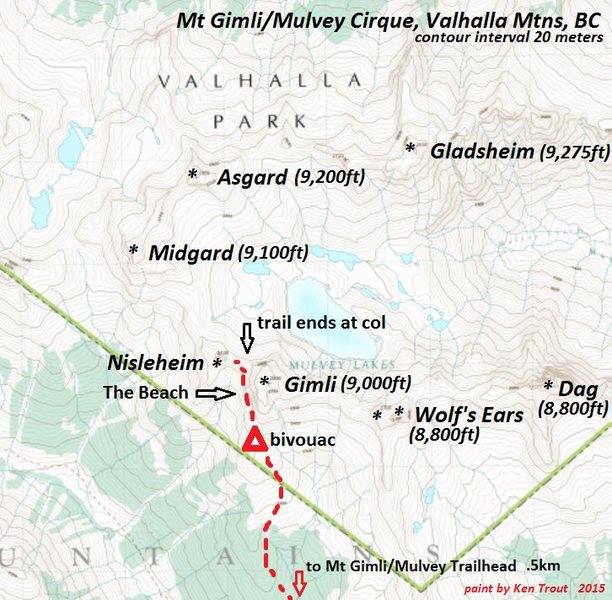 base map from peakery.com
Most climbers visit the Valhalla Mountains for Mount Gimli and company.

John Scurlock has taken good photos of the Valhallas from his airplane. They are filed under "Columbia Mountains" on his home page: pbase.com/nolock/image/1383…

Soon after, delving higher into the Mulvey Peaks, Peter Rowat and company discovered the South Ridge of Mount Gimli; an ultra-classic pillar (III+/5.10a). 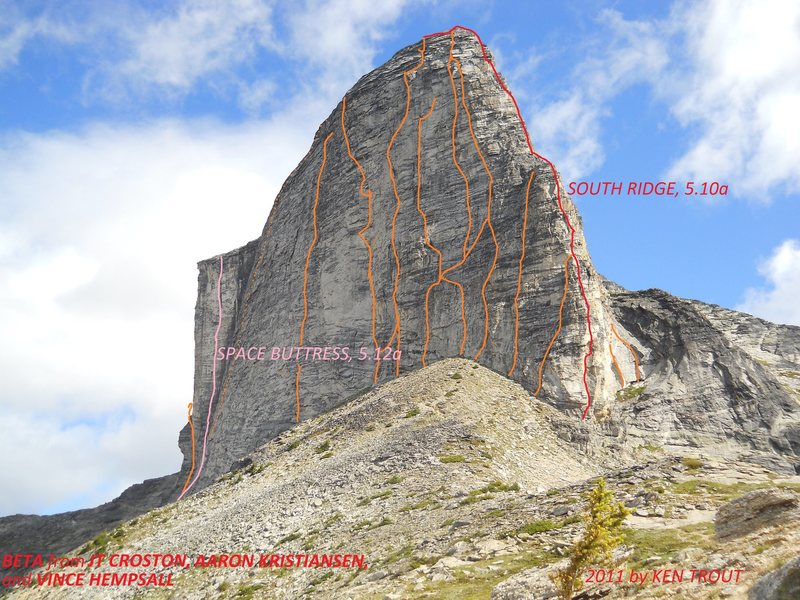 MOUNT GIMLI-WEST FACE All known routes marked approximately.
The pioneers of technical climbing endured horrendous brush fights to access the Valhallas; Roskelley, Rowat, Fred Beckey and a very few others . Today, a logging road and trail have changed the game.

Most recently, mountain guide David Lussier, master-of-Gimli JT Croston, guide book authors Aaron Kristiansen & Vince Hempsall, and their friends have added both modern and traditional routes. Also, they have proven that there is more to the Valhallas than the Mulvey Peaks.

The first complete guidebook to the area is being compiled by David Lussier. The summer of 2014, maybe even 2015, would be a good time to make your mark before publication.

LOCATION
Please use the Mountain Project locator satellite map. Found at the top left of this page on laptop. Gotta push the more beta-button for phones.
Click for the Roadmap

THE BIG WALLS OF THE VALHALLA MOUNTAINS
The rock is metamorphic gneiss with numerous horizontal black bands forming good holds. The walls are like an alpine version of Clear Creek Canyon, Colorado; not at all like the hand-hold starved granite of the Bugaboos.

MOUNT GIMLI (9,200 ft)
Gimli is a monolith almost on the scale of Half Dome. 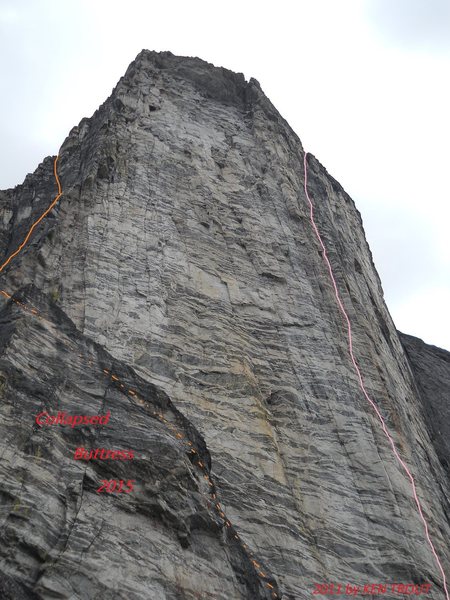 Space Buttress - Steep enough to stay dry Rockfall 2015 -see photo House sized and unstable boulders now cover the trail to the Gimli-Nisleheim Col.
A rockfall came down and wrecked the trail and initial pitches of String of Diamonds, 2015.

MOUNT ASGARD (9,200')
The routes on the east face of Asgard are reported to be steep with lots of nice holds. From left, West Ridge (5.7, East Face-Left Side (5.8), East Face-Center Route (5.8), and the latest modern route Etoile Filante, (5.11c, approx 25 bolts, 7 pitches). The three trad-route ratings may be sandbags, like the original grade for Gimli's South Ridge once was. 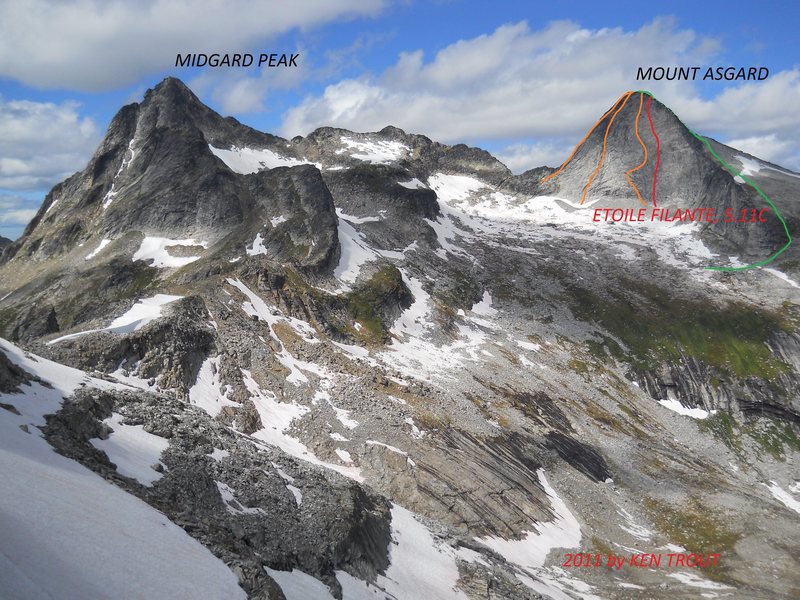 Taken from Gimli-Nisleheim col.
The fuzzy image below is from page 10 of the local guidebook, West Kootenay Rock and is an advertisement for Gravity Unlimited Adventures, the local gym. Mt Asgard is not described in the book. I'd bet there are very few completed routes on the northwest side of Asgard. 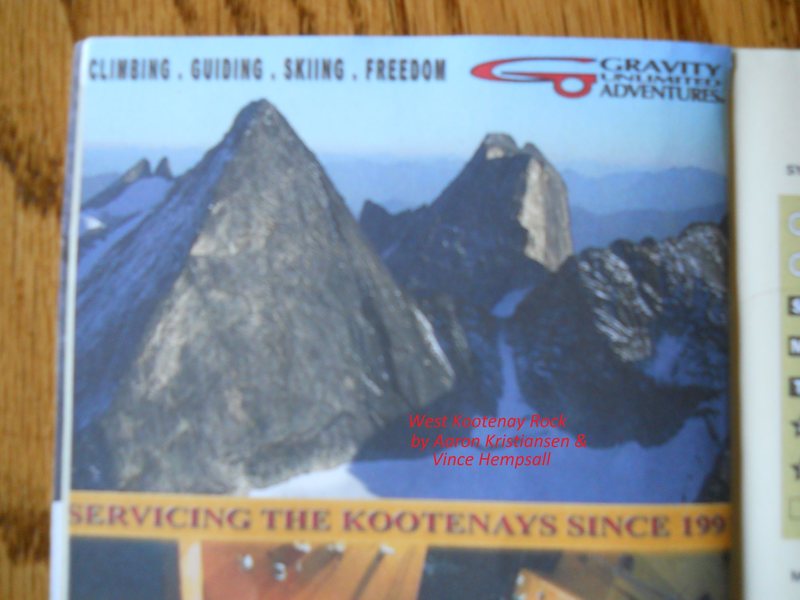 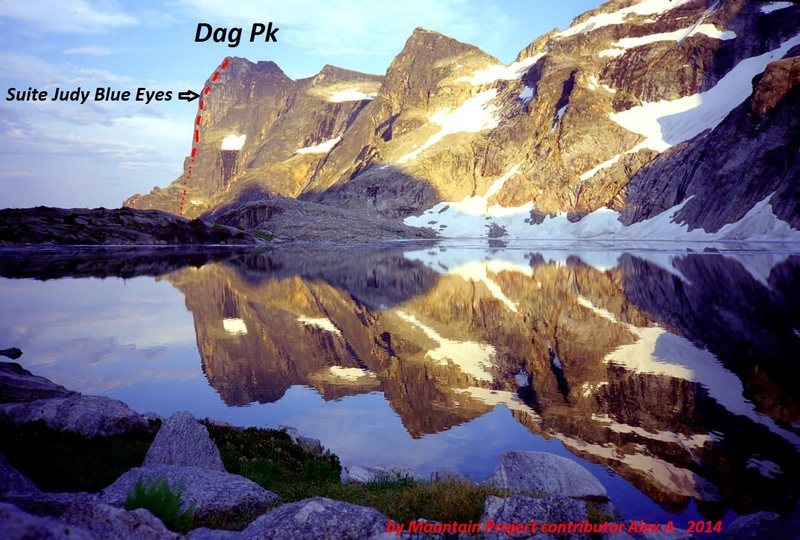 Mulvey Lakes, Dag's upper N Face
If size matters and your looking for something bigger than the Black Canyon, then Dag's north side might be for you. Four difficult grade VI routes have been done. Route descriptions indicate that all the routes follow major cracks and chimneys. Steph Abegg has posted lots of very nice images of Dag's north face on summitpost.com.

Suite: Judy Blue Eyes (5.9, A2) In 1972, Spokane super-climber John Roskelley and his partner Roy Kligfield had to endure a two day brush fight just to reach the wall. Roskelley reported: "For the next 2 & 1/2 days we cleaned and nailed the moss filled cracks, leaning jam cracks, and a crux viscous chimney (CAJ, 1972)." They used 50 piton placements and drilled several belay bolts by hand. Roskelley, better known as the first American to climb K2, also made the second ascent of the North America Wall, El Capitan. 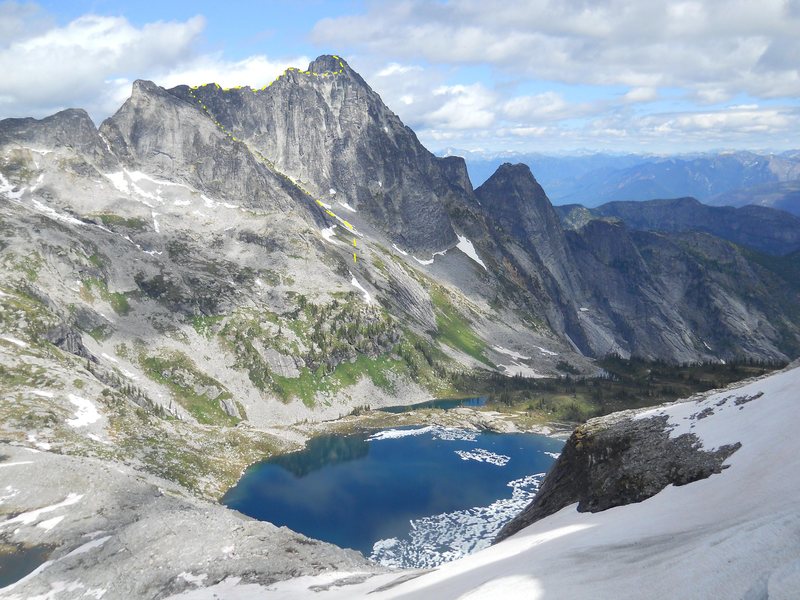 GLADSHEIM & WEST MOLAR Photo by Ken Trout
Yellow dashes mark the normal route to the highest summit of the Mulvey Lakes cirque. The south face has had at least two ascents (seen in image above). The hard-to-reach north side has a spectacular ridge with two long 5.10 routes. 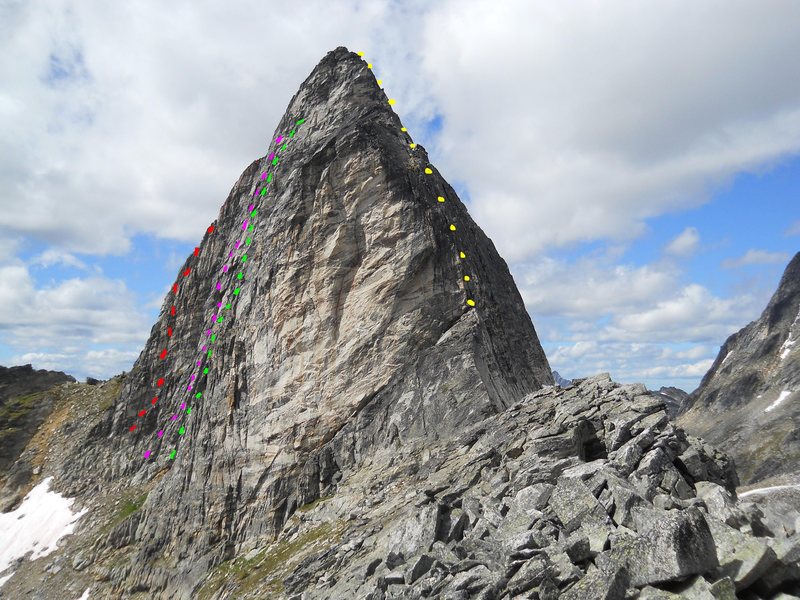 Nisleheim Photo by Ken Trout
Nisleheim is probably the second easiest peak to approach, after Gimli. I marked all the routes shown in the West Kootenay Rock Guide as a way to show what is left to be done. From the left, 5.8 (red), 5.10 (lavender), 5.9 (green), and 5.7 (yellow). Looks like a lot of unclimbed steep rock smack dab in the middle of the face.

GIMLI-MULVEY APPROACH
Horrible bush-wacking once guarded the walls of Valhalla. Climbers had to either start hiking from as low as Slocan Lake or charter expensive helicopters. But not now. When the snow melts, fifteen miles of logging road climb thousands of feet up to the Gimli-Mulvey trail head. Three miles of well kept trail climbs 2,200 feet reach Mt Gimli.

At the bivouac there are bear boxes for safe storage of food and a heli-privy to use. However, the goats have not learned how to use the green plastic throne so the bivouac smells like a barnyard. Sleeping in the parking lot with the bears and mosquitoes is another strategy. I prefer an early start from the campground in the town of Slocan, BC. 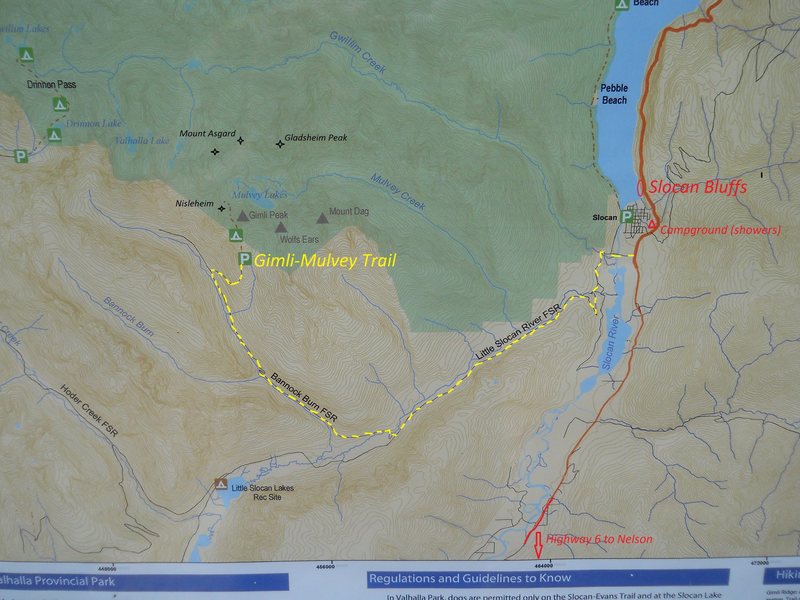 Photo of bulletin board map at Gimli-Mulvey trail-head. 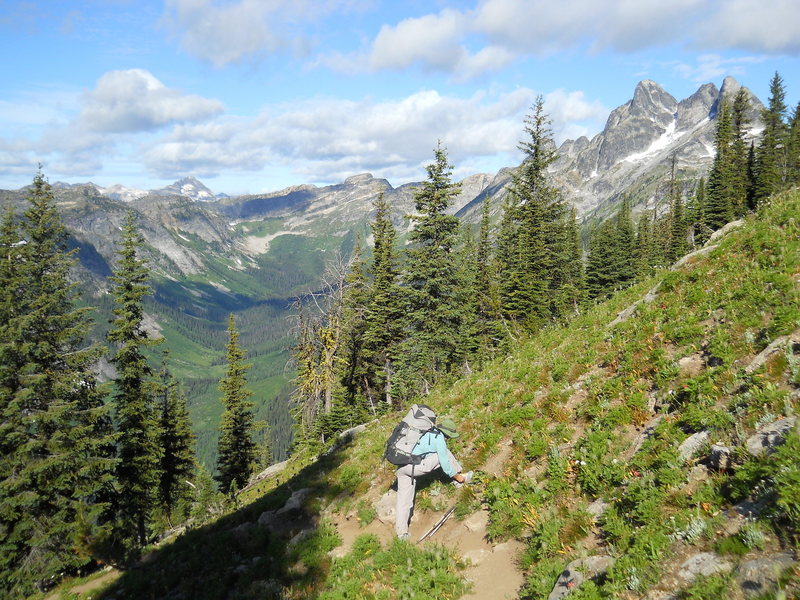 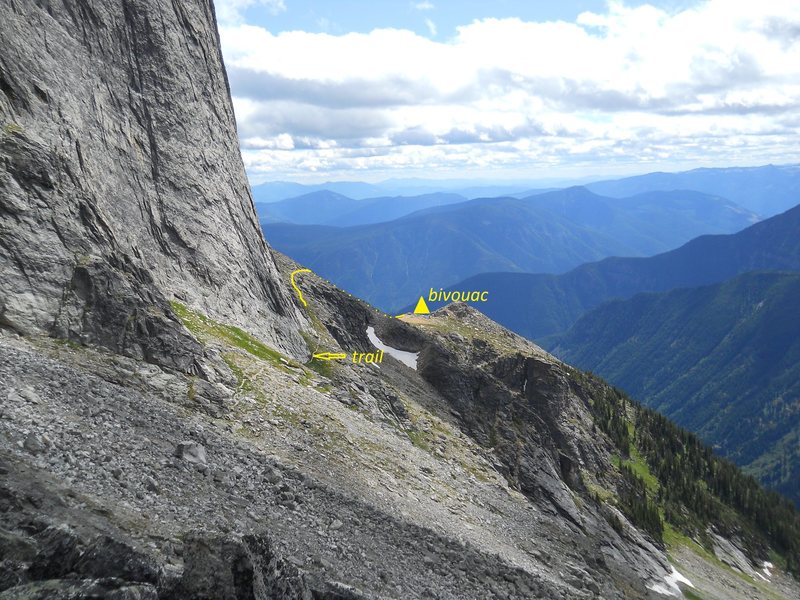 Zoom in to see the trail. 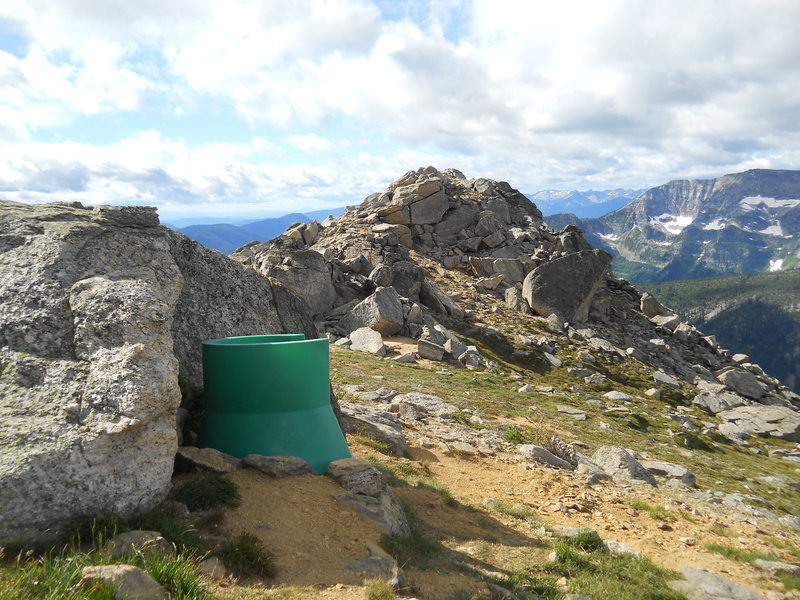 Zoom in to see the chicken-wire barricades around the cars at the Gimli trail-head. Photo by Ken Trout
The animals in these mountains are nuts so look out!

Before you leave your car, build a chicken-wire barricade to keep the snafflehounds, mice, and porcupines from chewing open your break lines, wiring, and tires. Bear country is no place to get stranded. Experienced climbers are rumored to carry their own chicken-wire because there is not enough at many trail-heads. Only enough wire for three cars was found at the Gimli-Mulvey trail-head, August, 2011.

It seems that British Columbia's grizzly bear population is increasing. Carrying bear spray and traveling with a least four people is the best advice for bear country. Bear spray must be bought in Canada. At the Mt Gimli trail-head, it might be a good idea for small teams to wait at the cars until others show up and then all hike in together. One personal anecdote - The plastic arm-rest of the Gimli trail-head's privy looked to me like a grizzly tried to take a bite. My wife thought I was exaggerating, until she went for a look. 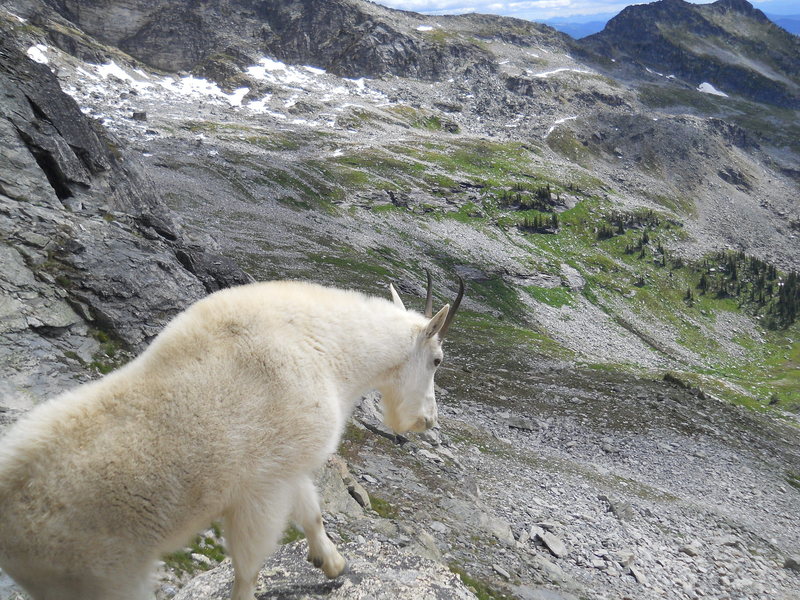 Mtn Goat crowds the start of Gimli's South Ridge.
Further up, the mountain goats and snafflehounds invade the bivouac site. Even worse, as the goats begin their daily climb of Gimli's East Ridge, they will begrudgingly crowd climbers at the first belay for the South Ridge of Mt Gimli. Once up on the East Ridge, they also like to knock rocks down on both climbers and their own kids. The summer before I took the above photo, a 300 pound male goat killed a photographer in the Olympic Mountains. The goat gored him and then it stood guard over him while he bled to death.

David Lussier is the most active mountain guide for the Valhallas. Book early if you want Mr Lussier to take you up Gimli's Southeast Ridge. summitmountainguides.com

When the snow has melted off the access road and trail, Mr Lussier will often post a condition report on the Association of Canadian Mountain Guides conditions forum.

There is currently one guide book and it covers a very small part of the Valhalla Range: West Kootenay Rock Guide, by Aaron Kristiansen & Vince Hempsall. Their book is mostly about the lower altitude crags along the Columbia and Kooteney rivers. In the alpine zone, Kristiansen & Hempsall include the near-side of the peaks above the Mt Gimli Traihead; Nisleheim, Gimli, and Wolf's Ears. A total of 18 really good alpine rock climbs.

The Nelson, BC, branch of the Vahalla Pure Outfitters chain is the closest climbing shop to the Valhallas. There is also a Valhalla Pure in Revelstoke and maybe one in New Denver, BC. This is where a copy of West Kootenay Rock Guide can be found. Also, they have a good set of maps for sale in a spiral bound book called Backroad Mapbook; the Kootenay Rockies edition. Valhalla Pure Outfitters; 213 Mackenzie Ave, Nelson, BC. 250-354-1006

THE OTHER ROCK CLIMBER'S VALHALLA
The Valhalla of Sequoia National Park has walls as big as Dag and Gimli but better rock!!! However, the air quality is known as some of the worst in America's mountains.
Valhalla, CA 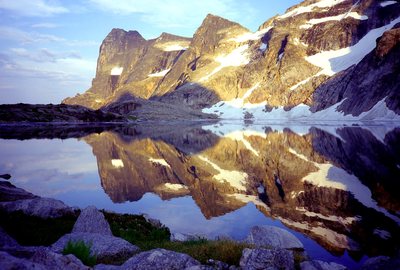 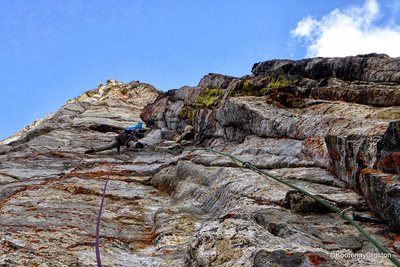 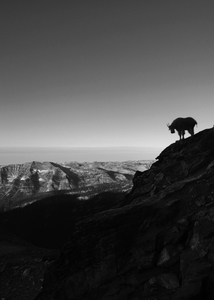 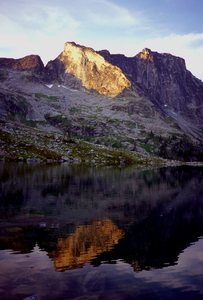 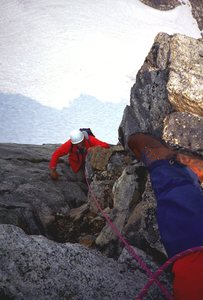 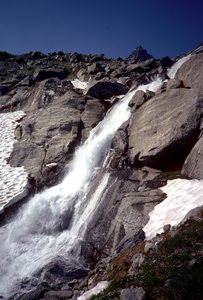 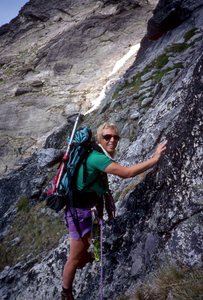 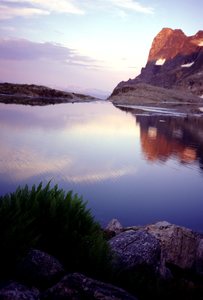 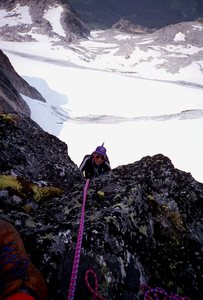 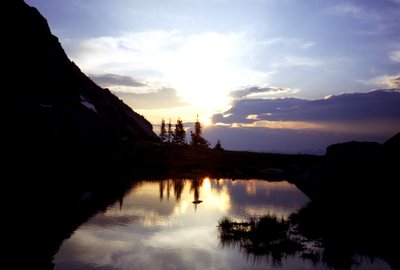 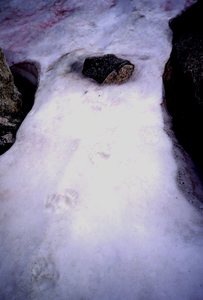 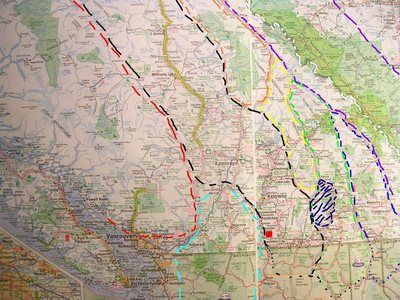 All Photos Within Valhalla Mountains