Access Issue: Off limits in winter and spring Details

The entire area is off limits, by Federal regulation for the protection of wildlife. in winter 2010/2011, the closure was effective from early winter through mid June. Fines are very very stiff for infraction of federal wildlife regulations.

One of the premier climbing destinations in central Switzerland.

The venue is south facing, and gets drenched in sunlight. The base of the wall is at an altitude of around 2000 meters above sea level, and the routes are around 200 meters in length.

The rock is top grade limestone, with a fairly consistent pattern across the entire wall: compact rock offering technical face climbing in the lower section, horizontally-banded rock with jugs in the middle section, and a roof followed by razor-sharp pocketed rock towards the top.

Due to the length of the approach, the traffic is always moderate. Except on summer weekends, your interaction with other people here may be limited to the sounds and smells emanating from your partner.

The routes are all bolted, and generally quite well at that. The newer routes on the left (westernmost) side of the well, in particular, are immaculately protected. Descent for all routes is via straightforward abseilpiste, of which there are several.

In total, there are upwards of 20 routes at Ofen. For more information and topos for most of the routes, look to the Swiss guidebook "Schweiz - Plaisor Ost".

Tip: Bring along the gear to bivy, and make it a two-day trip. There is a beautiful plateau just before the last incline up to the wall.

In the Melchtal valley, where you begin the approach, you can find restaurants and hotels. There is also a small ski resort, Melchsee-frutt, nearby.

Towards the end of the valley, about 1.7 KM after the village of Melchtal, an inconspicuous side road veers off to the left of the main valley road. Take this road up a couple hundred meters until it splits into two private roads, one heading up and left, the other up and right. Park here.

The approach is a straightforward 2 1/2 hour affair, depositing you at the base of the cliff in a state of very good blood circulation. You follow the private road going up and right from the carpark, following the trail signs for "Unterboden". When you reach Unterboden, a small plateau, after 45-60 minutes, a single trail takes off up steeper, forest terrain. This trail takes you all the way up to another plateau at the base of the final incline up to the rocks. 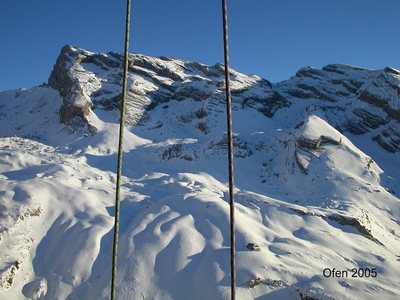 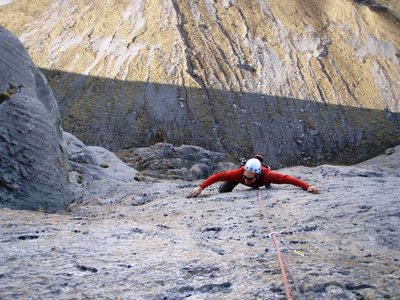 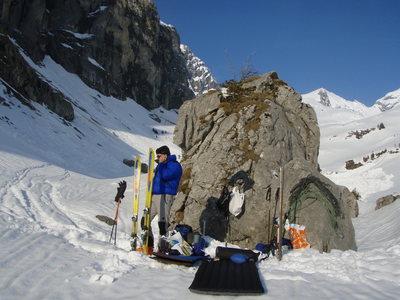 A fantastic spot to bivy, very worthwhile given… 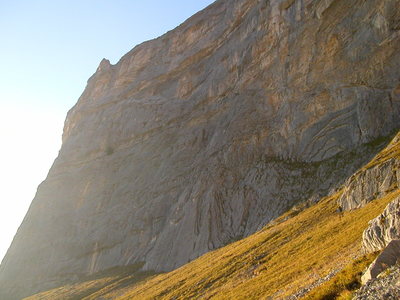 View of the main wall in the early evening. 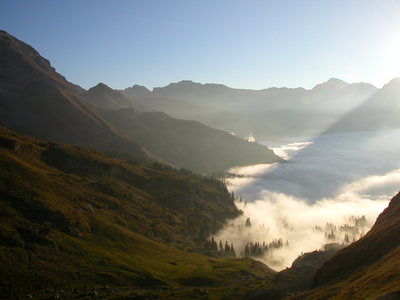 The view from Ofen down into the cloud-covered… 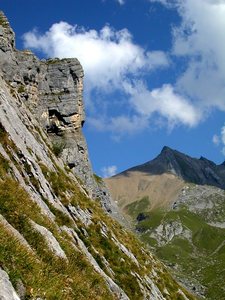 View of the pillar that marks the beginning of…

All Photos Within Ofen