This nice formation is home of some of the cleanest rock in the Sandias, standing directly across (east) from The Thumb. The two classics on this formation are Mountain Mamma (5.10c) and Voodoo Child (5.12a).

Overview:
From the Crest Spur Trail, you are going to go North with the general goal of getting to an aspen-covered ridge that heads West, down to a log-cabin ruin, where most people leave their packs and harness up.. From the tumbled-down cabin one heads North, just above a cliff until it is possible to descend a fourth-class gully and then head South along the base of Torreon to access the climbs. Portions of this approach can be tricky.

Details:
The aspen-covered ridge that heads down to the West is easily visible from the crest spur trail unless there is thick fog. A problematic portion of the limestone band lies between you and the aspen ridge. There are at least two ways to get onto the ridge. Currently (2009) it is popular to head North from the FIRST switchback in the spur trail. There is a well trodden path with a grey post in front whose purpose appears to warn you that the well trodden path to the North is not the spur trail. The idea is to walk along above the limestone cliff to a particular place where a few 5.2ish moves punctuated with ledges get you to the base of the limestone band and onto the aspen-covered ridge. Presently (2009), a dead, double trunked tree is a landmark. The top of the cliff is a tad more trodden here, where lots of people have peered off the edge saying things like, I think this is the place. or It looks like this will go. A problem is that a trodden path continues North from here, so one could pass up this down-climb spot and waste a considerable amount of time. It helps to go with someone who knows where the down-climb spot is. Once on the aspen-covered ridge, it narrows as you progress down and leads you to a log-cabin ruin (still here in 2009). The ridge ends at a beautiful overlook. The back side of Torreon is to the West.

A second alternative is to continue down the spur trail to the SECOND switch back. Similar to the first switchback, there is a trodden path heading North and a grey post whose purpose appears to be to warn you that this is not the trail. Presently (2009), the trodden path takes you to a place where a dead log is holding tons of scree from cascading down a gully. RESIST the temptation to go down the well trodden gully. This mistake leads to crossing lots of unstable soil/scree and huffing to gain the aspen-covered ridge. Instead, cross the scree above the log and stay with the base of the limestone cliff, where there is presently no trail. Hugging or staying just below the base of the cliff keeps you on relatively stable soil although currently involves bushwhacking through Gamble Oaks. Fret not. By staying with the base of the cliff, the bushwhack over to the aspen covered ridge is short. You know you are there when the limestone band offers a toe which has a relatively luxurious growth of orange lichen. It is now a short stroll down the aspen-covered ridge to the tumble-down cabin.

Once a climber trail is established through the Gamble Oak in the stable soil near or along the base of the limestone band, this may become the preferred approach. There is no need to incorporate the section of existing trodden path. This route is a nice alternative when returning if you timed your top-out of Torreon just before the rain started. It is nice to avoid climbing the limestone band in the rain.

Now your goal is to find your way into the gully that is to the North of the cabin site. There are many eroded paths from many people fumbling the approach to the gully. All the wrong ones lead to one of many fifth-class descents which you may choose to rappel, climb down, or back away from, causing more soil erosion. Your goal is to find the fourth-class decent. Heading North and down from the cabin will probably take you to a well-trodden trail. It affords views over the edge of the 1st gully that let you know you are not there yet. The fourth class entrance to the correct 2nd gully is about 100 paces from the cabin site. Local landmarks are: The gully has a wee head wall. You bypass it by going North and then making a switchback near two large Douglas Fir trees. They are the biggest ones around. You should be looking into a trodden gully that heads West (probably to your right) and the short headwall of the gully is probably up to your left. There may be a small cairn at your feet. This is it  the only entrance to a legitimately fourth class way down this gully. [Note: If you have really found this spot, you did not stumble down any loose, eroded soil to get here from the cabin ruin, you did not need your hands, you have not done any substantial descending yet. Therefore, you are in the wrong place if you are contemplating doing any of these things without seeing a fourth class gully and its short headwall, which you just skillfully bypassed.] The way is now clear for a long, steep hike down. You will pass the foot of a bright-green-lichen arete. After a while you will be stumbling down loose scree and talus in the woods, clearly following the path of those who have done it before you. When in doubt of whether to scramble down into a gully over large talus, instead curve to the skiers left (South) to more-or less hug the base of Torreon.

Topping out:
Scramble to the tippy top of Torreon. Look off the east side. There is a fat pine that probably sports various vintage slings, cords, descending rings, quick-links, etc. It is good to rap with one 60-m rope to avoid problems getting a knot stuck. When descending, try to stay to the climbers right to go over the big blocks. Your object is to land on the saddle that connects Torreon to the mountain. After pulling the rope, leave your harness on, traverse East and climb the gully Northeast. It should be obvious to take care not to fall out of the bottom of the gully. After some scrambling there will probably be a fixed rope  the reason you left your harness on. Climbing the wall to the right is easier but will result in more of a swing if you fall. After a bit more huffing up the gully, the tumble-down cabin site appears on your right.

Continuing down from the base of Torreon:
The backside of the top of the Mexican Breakfast crag is directly across from Voodoo Child. There is a talus saddle between it and Torreon. Ostensibly, you can climb down the talus on either side to get to the base. Going around the South side works, and goes past the point where Mexican Breakfast finishes, where the ridge of the crag drops down to the talus level.

From Mexican Breakfast to the La Luz trail:
Go downslope into the gully. It may be easiest, at first, on the left side. Then, cross to the right side to pass a small-house-sized boulder. Then cross to the left side and depart from the gully, which heads down to the Southwest. Head vaguely Southeast to pick the easiest way through the forest and avoid loosing too much altitude while heading for a trail.

Mountain Project's determination of the classic, most popular, highest rated climbing routes in this area.
More Classic Climbs in Torreon » 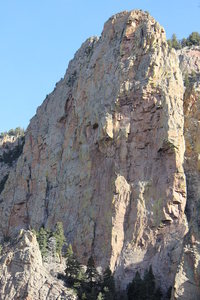 Photo of the Torreon from the La Luz trail. 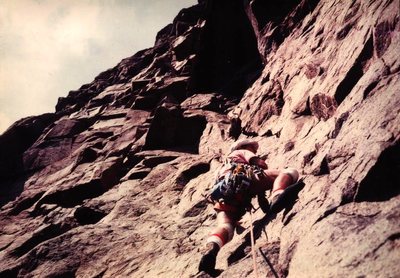 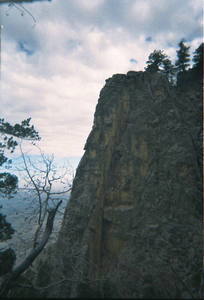 Photo of the large arete with green colored lic…

All Photos Within Torreon