Areas in Far Side

(Please note: Rock fall at Gun Show in August 2016 may have erased some routes in your guidebook.)

The Far Side is one of three major sub-areas off the Exit 38 ramp on the I-90 corridor east of Seattle. It is a collection of mostly bolted crags located on the north side of I-90, all surrounding and below Dirty Harry's Peak. All rock is accessed either from the recently created Dirty Harry's Peak trail, the Climbing Access Loop that branches off from it, or other short spur trails. Most climbing areas are marked with signs. Almost all of the crags have southern exposure and get good sunlight. The Far Side was established more recently than Deception Crags, and it is often less crowded - although this has a lot to do with the longer approaches. The Far Side is still actively being developed, particularly at Gun Show and Neverland. Each crag might have one or two trad lines maximum, except for Shangri-La, the area recently developed by Rad Roberts. Shangri-La has some difficult sport routes and more moderate trad lines.

There are five main crags at the Far Side: Overhaul, Gritscone, Gun Show, Interstate Park, and Winter Block (listed by proximity to the trailhead). Overhaul offers the most climbs and most difficulty, and was one of the first Exit 38 crags to be developed. As such, many of the routes are dirty, or the bolts are in dangerous condition. Gritscone is a very small wall with easy toprope access to most of the routes; combine this with the easiest approach and it is one of the most popular beginner crags in the exits, with plenty of classes in the summer. While Overhaul is the largest single crag (bar Gun Show), Interstate Park has the most routes in four sub-crags closely surrounding each other. Each of them has similar routes: Headlight Point has many beginner climbs, Eastern Block has longer moderates, Mirror Wall has several overhanging 10s and 11s and Off Ramp has four moderate climbs. Gun Show has the highest percentage of .10s, the most popular slab route in Exit 38, and some excellent granite-like rock, as well as a selection of boulders below the crag. Winter Block is the place to be for seclusion.

Other crags of note - Truck Town (beginner crag that's very close to the highway), Neverland (a few short multipitch routes near drytooling), Shangri-La (the best rock in the area, similar in shaded nature to the LTW), and Sunshine Vista (several easy slab routes with a view).

Overall, the Far Side can be a much more enjoyable place to spend your day than Deception Crags. Slightly longer approaches, almost twice the routes, and much more room to spread out can make for a secluded outing. The varied nature of the climbing is also much more interesting than the south side of I-90. Within a mile-ish radius, there is chossy rhino rock, bullet-hard conglomerate sandstone, clean metamorphic-granite-like mix, and pure choss caves (Overhaul). None are parking lot crags, but most have something worth hiking for.

Get off I-90 at Exit 38 and follow the frontage road east past the Deception Crag parking for roughly two miles. After crossing under I-90, park at a large pullout under a high voltage line just before reaching an access gate. Hike down the road past the gate and across the bridge over the Snoqualmie. Once over the bridge, enter via the well marked trail to Dirty Harry's just past the guard rail on the east side of the road. Follow this approach trail for Gritscone, Overhaul, Gun Show and Interstate Park; to reach Neverland, take the sharp left uphill shortly after entering the woods on the trail.

Classic Climbing Routes at Far Side

Mountain Project's determination of the classic, most popular, highest rated climbing routes in this area.
More Classic Climbs in Far Side » 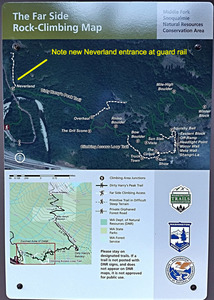 Map of the climbing area and trails at the park… 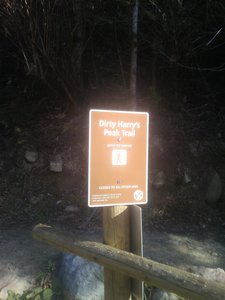 All Photos Within Far Side


More About Far Side