It is hard to believe this kind of rig is still out there unclimbed, but they’re around here. This was a four day adventure for us - big days figuring out the hike in and climbing the lower slabs. We went ground up, equipping and cleaning as we went. We led it with a mix of free and aid, but the follower was able to follow free on most of it. The last two pitches are the crux. We were not able to continuously follow those. On pitch 4, we got with a couple of hangs, and it probably clocks in around 11+OW after a solid 11 sequence. Pitch 5 tackles the steepest part the huge roof that caps the entire route. We got that clean on follow, but the headwall above needed some work and is a bit dirty. Led at C2, we didn’t put any bolts in, because we wanted to leave it clean for the next generation. This pitch is probably solid 12, and what a fantastic grand finale - busting moves like that over 1000’ of air -f#@king Bannanas Man!

You need to figure out the lower slab “Kung Flue 5.9” is the quickest option. 250’ later you're on the big ledge and hiking unroped up to the base of the huge corner that marks our line of ascent.

P1. This is a great pitch clocking at solid 10+ mostly hands and smaller. Climb above the belay, and downclimb for the true send or clip the fixed nut and tension over to two bolts and a nice stance!, 5.10 110’+/-.

P2. Step up your game to ascend these double stacked roofs. Climb the first one with micros and a few finger-sized pieces, then climb through the chimney up to a second wide roof. We put a bolt in at the lip of the second roof to help take some of the sting out. This last section was led on #7 & #8 BDs, 5.11, 110’ +/- .

P3. Climb another sweet pitch through a runout slab passing a corner to an arete to an hand and finger crack with sweeping exposure- a sweet pitch! A bolt was added to this slab after the fact.  We both agreed there was significant fall potential on sketchy gear and decided to protect the hardest moves.  5.9, 90’ +/-.

P5. The “cou de grace” ascent the finger crack up and out the 10’ horizontal roof - pull the lip to more hard free climbing and some less stellar rock. To make an honest free attempt of this, you would want to clean up the headwall; pretty good moves - lots of lichen. We got the roof at V4/5 but lost it on the headwall. Summit to natural anchors. There are fixed anchors for the descent are 15’ skier's left of the line of ascent and make for a fairly plumb rap to the last belay, which is also very hard to get back to because of steepness if you don’t plan ahead, 5.9 C2, 100’+/-.

We tried equipped this rig for single rope rappelling.  A lot of the stations are hard to get back to without some issues due to its leaning nature. From the fourth pitch, you can drop directly down onto “Masks Required”, which is another free route in progress, and rappel direct down its line of ascent on those stations with two ropes.

This climb ascends the obvious, left-leaning corner system that runs the entire length of the right side of the upper wall.

Triples from thin fingers to wide hands, double micros, singles up to the new #8 BD, two ropes, and lots of runners. 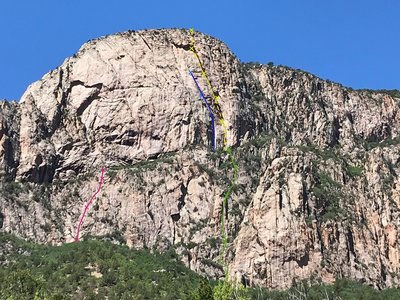 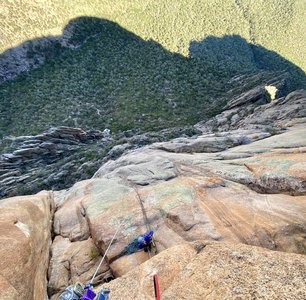 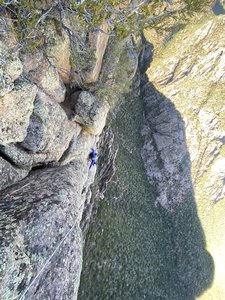 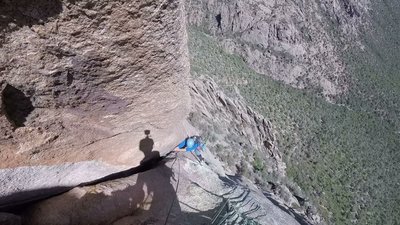 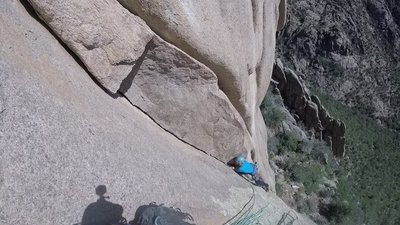