Routes in The Ledges

Start beneath a small roof, and pull onto the jugs and ledges. Clip and ascend above the first bolt. Climb easy terrain to below the pine, and carefully orienteer around the left side (recommended) of it to attain the ledge (the rope runs away from rubbing on the tree this way). Puzzle yourself up to the tombstone-like slab above, balance onto the top of it, and proceed on variously angled features on the left-ish side of the pillar to the chains. Going straight up the clean face is more difficult and spicier. The bolts on Counting Sheep off to your left are not too far away, but avoid them.

Safety tip: when pulling your rope, you might want to pull off to the left (west) direction, since pulling it directly down the line of bolts might deposit it firmly wrapped around the pine tree as has been known to happen on occasion.

I believe this is Layton Kor on the ledges. .

This image of Layton Kor at the Ledges here on Mountain Project that shows him peering up and off to his right toward the upper portion of The Classic seemingly has him situated on the ledge where the pine tree currently grows. A good-sized, rocking boulder was fairly easily removed from this ledge when cleaning off loose rock. Love Again proceeds up above him on the face/seam feature.

Midway along the base of the middle tier of the Ledges cliff complex, find a slightly left-leaning pillar feature with a small pine tree about mid-height. To the right are large, overlapping slabs that comprise much of The Classic. 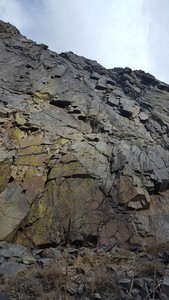 Pablo Frank about to make the move onto the hea… 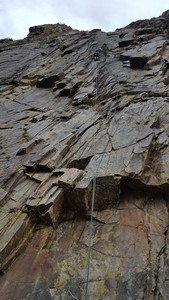