There presently are five bolted routes on Guide's Wall. Stand Off is the third as you go from left to right.

Until September 2016, this was a TR route using bolts located on a short wall above the top-out ledge, and it served as a sketchy trad lead as well. Now it has three bolts and sport anchors.

On at least one other website, this route is listed as a 5.5. It is not 5.5; the submitter likely confused this with Thin Crack (once 5.5 here but 5.6 in the guidebook), and a new leader may very well find himself in way over his head if he jumps on it thinking it is 5.5.

The crux is an awkward sequence from the third bolt to a great jug below the anchors. Moving between B2 and B3 also gives some people trouble. In the photo, the rope is set on Thin Crack. Stand Off is just to the right. This picture was taken before the routes were bolted.

The newest edition of the guidebook downgraded this route to 5.6/5.7. I disagree with that, but we'll see what the community says in the long run. In fact, I feel many of the Greenbelt routes could be bumped up at least a grade due to the polish, which is definitely a factor on some climbs.

To access the toprope anchors if you don't want to lead on this wall, walk to the right past the end of the wall and find a use trail climbing up and then traversing back to the anchors. There is a Class 5 shortcut by a "cave" if the fall risk is worth saving a couple minutes. The use trail can get pretty brushy.

There also is a 5.6 access to the left of the wall; I will not describe it lest I be seen as encouraging people to scramble up it. 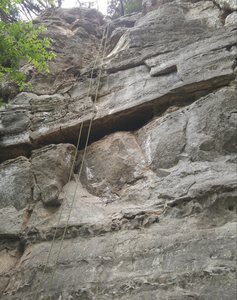 Thin Crack and Stand Off The rope is set on…

More About Stand Off