Start on the right side of the anchors and climb to the right of the first two bolts. Do not start on Sunny Day. The first two bolts are not in the most ideal locations but it was the best rock at the time. We cannot just stick bolts into any rock as much of it is not of the best quality. Follow the corner to the right of the first bolt up to a good stance under a slight overhang. There is a really nice side-pull on the ledge, a few feet right of the second bolt. Step up on the hold near the bolt and then up to the ledge. Traverse left, just past the third bolt and climb the right edge of the large block. Move just past the fourth bolt, to where the horizontal cracks can be reached. Stick your right foot into an obvious dish and swing the left foot up over the top of the ledge. Under-cling the uppermost horizontal to clip the rings. The rings were placed as far right as possible to allow other climbers to still be able to use Sunny Day. If there are not other climbers on Sunny Day, or climbers waiting, it is ok to use the anchors that were previously shared by both routes. This route was mistakenly called Layback Flakes, which was one of the early routes in this section. We are not completely certain of the original line but it most likely was closer to Sunny Day. This line is not a 5.8 so don't get excited. We climbed it for years on trad gear since it had decent pro but it is fairly certain that Steve Pope and crew had already climbed all of this rock. After installing the anchors, I did rope solo it a couple of times to test the clips. It is really easy so a 5.6 rating is a bit more accurate.

4 bolts and rings at the top. 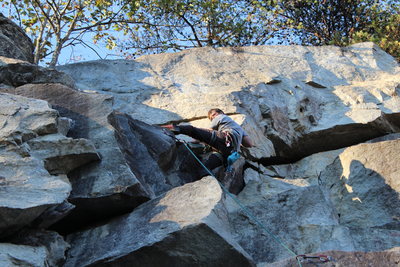 The last move to the ledge. You can go ahead an… 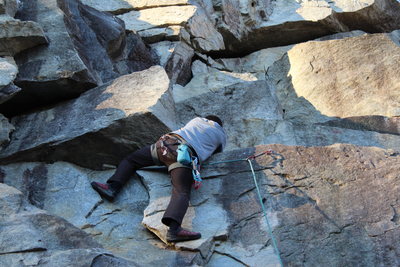 Getting into position to pull the block. 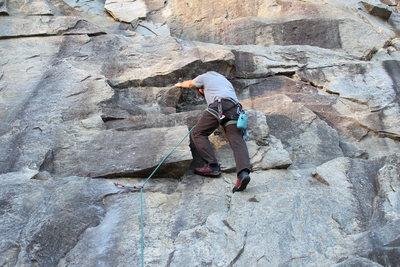 Climbing to the second bolt. 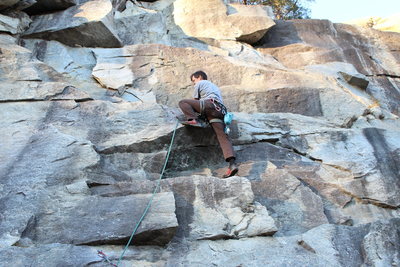 The intended move at the second bolt. 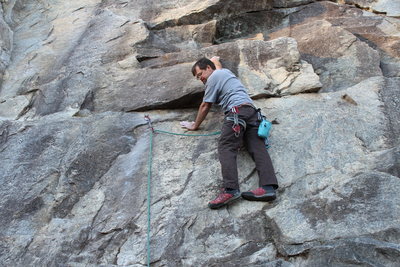 The first bolt of Cloudy Day.