Another long Red Diamond Wall climb: sustained from the get-go until a rest before the off-width at the top. Although the rock looks suspect (esp. at the bottom), everything felt solid. Seems to protect well enough in spite of original "R" rating.
(edit: the prevailing consensus is that MI is still R in spite of our new gadgetry. although the gear on the first half is plentiful, most of it might be considered psychological rather than reliable...)
My guess is the name was derived from MI's similarity to "High Pro Glow" which too follows incipient cracks before finishing with an off-width. The similarities however end there as MI is a spectacular line.

standard rack, might want something big (bd #4) for the top 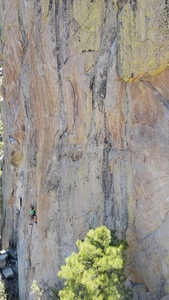 Charles Vernon on the lower part of the route w…