A Twitch Upon the Thread (submitted as Unknown)

P1, 5.11: fire up on largely moderate terrain to an interesting arete finish. This has fun moves on largely excellent stone. P1 gives a good warm-up for the rest of the routes in this sector.

P2, 5.11: a tricky start gains a broad ledge at 50 feet. The block above guards the crux and great exposure on some amazing jugs. Don't fooled by the jugs, the block is steep and still powerful.

A Twitch Upon the Thread, formerly called Unknown, is the center of the final three routes on the West Sector plates between Tremendous Trifles and Manalive. Richard briefly described this two-pitch route in his post in 2011, and I will try to add a bit from a failing memory.

Pitch 2: 5.11c, 12(?) bolts, 2-bolt anchor, 90 feet. Move right onto a blank wall and up (.11a) to a more moderate section below a band of poor stone. Contend with some crumbly rock before moving left under a large overhang and then up the final 15' of steep and exposed crux climbing.

"I caught him, with an unseen hook and an invisible line which is long enough to let him wander to the ends of the world, and still to bring him back with a twitch upon the thread." --GKC

This has overall entertaining climbing with a short section of poor stone on pitch two, 2.5 stars.

Descent: lower from the last pitch, then rappel.

Eds. This is a combination of 2 submissions for the same route. We combine them onto the 1st submission's page to reduce duplication and confusion.

This is the middle route of three in this sector and second from the left. Descend by rapping the route.

Per Mark Tarrant: this is the center of the three routes in the West Sector at the base of the Halidome about 60' up the talus from Wind Machine.

A dozen quickdraws and something for the double bolt anchors at the top of both pitches. We used a 70 meter rope, but a 60 meter should work as well. 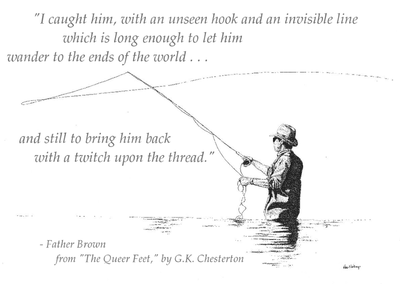 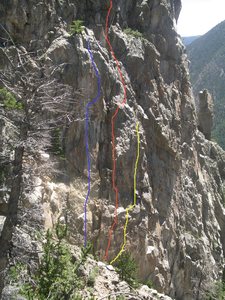 A Twitch Upon the Thread (submitted as Unknown)…

More About A Twitch Upon the Thread (submitted as Unknown)