Wind Machine is another long route on the Halidome. It tackles the great dihedral system obvious from the road off the lower half of the wall and then continues up the final slab, 50 feet left of King of the Mountain. Overall, the rock is largely excellent. This side of the Halidome faces South and West and gets brilliant sun starting a bit after noon. WM has been broken into 7 pitches, although we did it in 6.

Pay close attention to the descent beta. You will rap the route, but this must be done as I describe it here. Not following this advice will leave you utterly "F*****".

P1, 511b: Begin in a tight corner with a clip off an awkward ledge. Chase seven bolt and a cam placement to a double bolt rap station at 65 to 70 feet. The rock is excellent and a bit devious. The crux comes in the first 20 feet with the technicl crux at the second clip.

P2, 512a/b: This is possibly the technical crux pitch of WM overall. Diagonal right to the sharp white arete off some large, scary looking blocks. The crux begins at the base of the arete and remains tricky right to the end. Mark solved the problem of getting estabished on the face left of the arete with a long move that used most of his 6 foot frame. Some deviousness will work for shorter folks. Pull around the artete on huge jugs below the small roof and slap upwards for a sharp flake and the last clip. It is still hard to the anchor.

P3, 5.11-/5.12?: This is the great dihedral pitch, and it goes either with a transition to the arete at 50 feet or by following the dihedral to a black face at the dihedral's end (harder). Ten clips and one or two mid size cam placements for both variations. Climbing the arete variaton, as we did it, is largely straight forward but picks up terrific exposure. Exit to the arete uses the cams in a solid hand crack. Presently, the lower part of the dihedral needs more cleaning as it appears to pick up most of the drainage from above. I'll get this done early in July (2011) and most likely before anyone else trys the route. If you do beat me to it, tread carefully, which worked for me, and carry a small brush. Double bolt rap station at the top. Right side variation is very clean and seems pretty straightforward to the final face. This has not yet been red-pointed, but it would likely come in at 5.12(?).

P4, 5.5: This is a short slab that takes you to a rap station behind a tree and access to the major meadow that breaks this side of the Halidome into upper and lower sections.

P5, 5.10a: Scramble across the scree to the base of the upper wall. The line will be obvious and is presently the only route in this sector. Chase six clips to a double bolt rap station at 60 feet. We easily combined this pitch with the next.

P6, 5.9: Diagonal right to a belay station below the final slab. At the last clip, which needs a long sling, traverse to the right around the blocks, but don't head directly to the rap anchor. A two bolt belay is situated below and right of the rap station.

P7, 5.11b/c: Chase the slab to the anchors 95 to 100 feet above. Crux is getting into and out of a wide, flaring crack. It is bolted, but if you do own a BigBro, you might be able to skip the bolts. Bring 12 QD and something for the double bolt anchor at the top.

P7: A 60m rope will just get you to the rap station above and left of the belay. We used a 70m rope and had lots to spare.

P6/P5: These can be combined to rap to the meadow with a 70m rope. To avoid snagging the rope when it is pulled we left a carabiner at the P5 station and you definitely need to back clip this with both sides of the rope. I would not rap directly to the ground from the P6 station as it drops you onto some unstable scree.

P3: Crux rap. Rap the arete variation. Don't even contemplate the right side variation. The dihedrals are doubly overhanging and once you are off you are in outerspace, and potentially screwed seriously. First one down must back clip both sides of the rope through at least a few quickdraws. We left one carabiner at the arete transition and both sides of the rope need to back clip into it. First one down will have to pull the second into the belay at the top of P2. Definitely leave the carabiner at the transition point and pull the rope through it.

P2/P1: One rap to the ground using a 70m rope. The ends of a 70m rope will just graze the ground. A 60m rope will not reach ground. One might be able to back clip around to the top of P1, but this seems hugely complicated.

Approach Wind Machine as you would for King of the Mountain and Cat Tracks. Wind Machine starts about 200 feet up slope from the start of these two routes. You will pass Bob Horan's four bolt project on the way. There is a small belay platform at the base.

A dozen or so quickdraws and two mid-size camming devices. We used the two middle-size Link Cams, and they seemed ideal. A 70 meter rope is absolutely mandatory to rap from the top of P2. In principle, you can rap from the top of P2 to P1 with a 60m rope, but doing this would be difficult. Use double ropes or a 70m. If you have one, and remember to bring it, a Petzl Shunt would comfortize the rap from the top of P3 and potentially rescue you if you do end up off in outerspace. 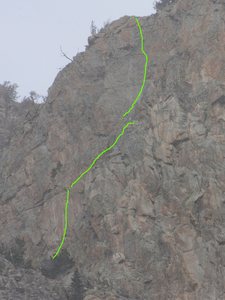 P5 to P7 of Wind Machine comprising the upper w… 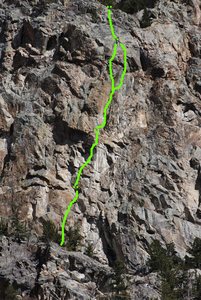 P1 to P4 of Wind Machine comprising the lower w…