Routes in Warm Up Wall

Another superlative 5.9+ that is probably better than The Pakastani Route and most other 5.9+ climbs in this or any other solar system.

This route tends to get ignored because it's one step to the right of it's counterpart, Princess, I Wanna Leaha, and most folks are fairly warmed up and ready to move after that sending that route.

However, if you are a beginning climber who is catching your stride and getting good at 5.9's and 5.10's this is a route that you will not want to miss out on.

Starts in a crack and only gets better after that. A touch more featured and varied than Princess, Skywalker will take you to new heights with smaller holds, laybacks, sidepulls and jugs with reachy placements that will have you straining like Luke did when he was in the Death Star's second floor bathroom. I betcha missed that scene didn't ya?

Again, just keep climbing! The holds are all there and they only keep getting better! Keep searching reaching for that next hold! If you onsight this climb be sure to get onto the shorter climb just down the hill from Skywalker called "Erectile Dysfunction", which is something I'm sure Luke got when he found out he had been making out with his sister.

On top of the pedastal and farthest to the right. Start in the crack and layback that sucker!

9 bolts and open shut anchors. Stick clipping might be a good idea but it's not as imperative on this climb when compared to the princess route. 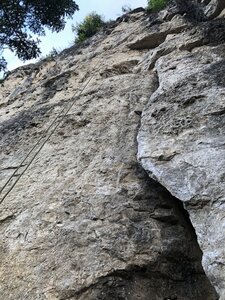 Route starts on this chalked up flake. Rope is… 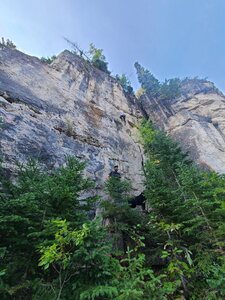