Although the grade for the route itself is only III the lengthy approach and descent make for a "full value day" as appropriately described by my climbing partner, Jon. Given the remoteness of the route I was expecting to encounter fragile rock but was pleased to find that this was not the case.

After an initially thin 5.9 start, the route travels up varnished cracks for ~2 pitches before moving onto featured face for 1.5 pitches. With sparse (but mostly decent) gear placements the crux pitch is thought provoking. Topping out high above the park affords spectacular views. In March the route goes into the shade in the early afternoon. All in all I have to rank this as among my favorite Red Rocks routes.

ROUTE
P0, aka the "approach pitch" in Handren (5.7, 100')
Climb a tight squeeze chimney (nearly impossible with a pack until you near the top) adjacent to a heavily pocket wall, on which I gave up on trying to find a decent gear placement. After the chimney follow a dirty, low angle crack (with good gear) to a pine tree. As of 12 Mar 2011 the pine tree had functional rap slings, although I added a carabiner.

From the pine tree rap down to the ledge below. Head climber's left around the base of the rock, through some bushes and slightly uphill until you encounter a section of red and white banded rock with large huecos (see photos). Two bolts mark the start of the route.

P1 (5.9, 200')
Move up the huecos traversing right on at time thin holds past 2 bolts, then move up and slightly left into a crack. Continue to a two bolt anchor.

P2 (5.8, 200')
Continue up the crack to its end, then up and right passing 2 bolts. Pull into a thin, left-leaning crack then up a vertical crack to a bolted anchor. Watch the rope drag on this pitch.

P4 (5.10a, 165')
Head up the featured face over 2 bulges (one of which is protected with a bolt) following a thin left-trending crack. Gear placements are sparse so pay attention. Fortunately the rock quality is good. Belay on gear from a large ledge.

From the ledge pull onto a slabby varnished boulder heading initially climber's left then back right on a large vegetated ledge.

P5 (5.3, 150')
Scramble up a heavily featured, low-angle slab to a narrow varnished ledge (see photo). Make a small jump across to a ledge with a pine tree. Use a gear anchor if you roped up.

P6 (5.6, 200')
Note: starting here Handren's description was off.
From the pine tree pull onto a ramp to a crack. Continue up the crack to slab for a full rope's length. Gear anchor.

P7 (low 5th, 100')
Scramble up a dihedral, up some blocks, then through a squeeze chimney with a wedged log. Continue up easy slabs to the summit.

APPROACH
Following Andrew's advice at approaching Ramen Pride Cliff from the right side of the pink cliff band (see photo) it is a shorter approach from the Oak Creek parking lot of the loop road. The downside is that you are subject to the loop road opening hours. Alternately park at one of the Route 159 Oak Creek lots (located 0.5 and 1.4 mi from the loop road exit).

Skirt the base of Ramen Pride Cliff and enter the gully that skirts the north side of the tower. The gully requires fourth and low fifth class scrambling with moderate bushwhacking. At one point the gully bifurcates; stay left. You'll be able to see the prominent dihedral that is The Warrior as a landmark. Approximately 300' from the prominent red band look left for a mossy slab. Scramble up the slab to reach the ledge that serves as the base of the "approach pitch".


DESCENT
From the top of the route follow the west ridge down. The descent includes some low fifth class downclimbs and/or an (optional) single rope rap. As Scott M noted the lower rap off the tree at the end of the W ridge can be avoided by scrambling down and left. As of 04 January 2014 the route was (mostly) cairned and had functional rap anchors. The cairns, however, are not always obvious. For the most part the descent route follows the easiest path down low angled slabs. The first time I topped out we did most of the descent in the dark (not recommended), but managed to stay on route following this method. For perspective, you will end up in a side drainage upstream from the slick slab that drops you into the stream bed on the Black Orpheus descent. Head downstream and follow the main Oak Creek Canyon back to the trail.

60m rope. Double rack to 3", but somewhat dependent on your comfort level on fairly sustained 5.8. Note that the two 5.8 pitches are almost a full rope's length. Fixed anchors on all pitches 5.8 and up. Small gear (<0.5" including small nuts) required for the 10a pitch, but given the availability of gear placements a single set should suffice. To avoid rope drag bring some slings (versus all draws), including a double-length one for P2.

Extra rap gear recommended for the descent in case the stations need upgrade or you get lost and require alternate station(s). 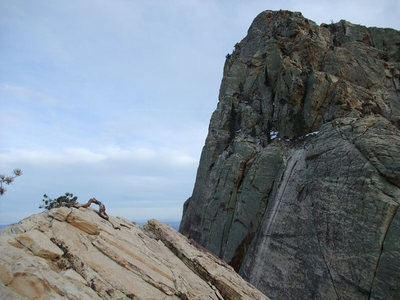 looking toward the Wilson summit 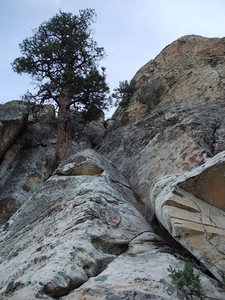 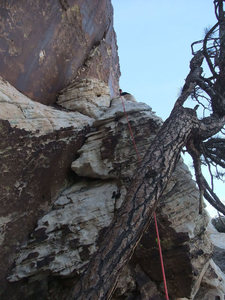 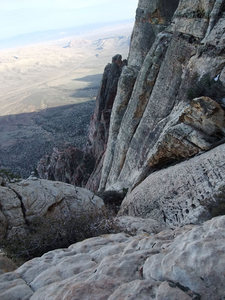 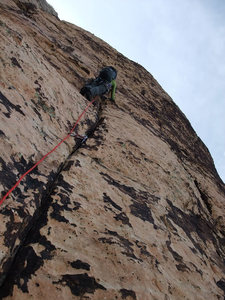 starting up the crux pitch 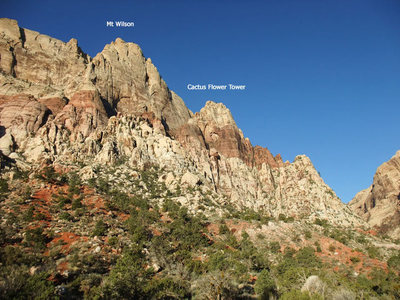 early view of our destination 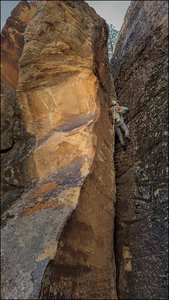 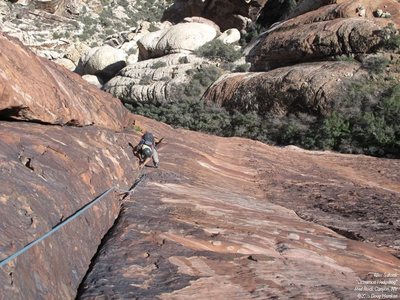 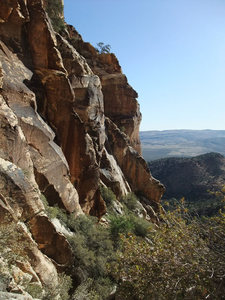 looking down to Wilson Pimple 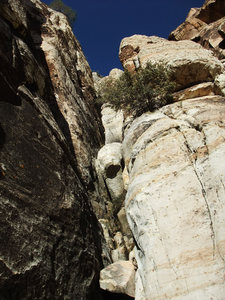 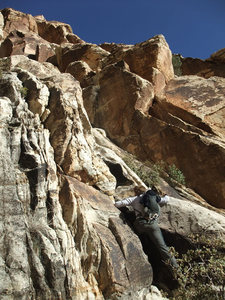 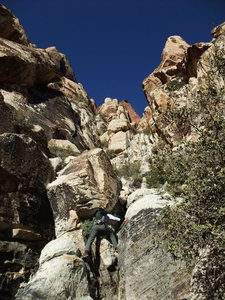 starting up the gully