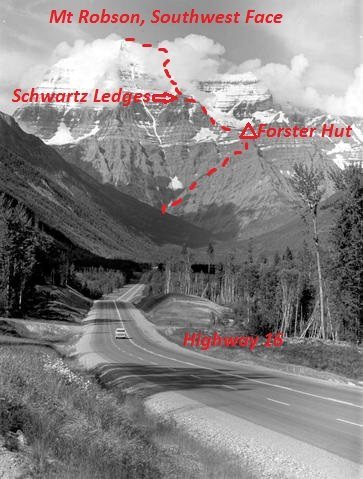 photo by Ministry of the Provincial Secretary and Travel Industry, 1968
The shortest route up Mt Robson also has the only hut, the Ralph Forster. Please don't let the presence of a hut give you a false sense of security.

Two thousand feet above the safety of the hut, an almost perpetually broken, unstable, and overhanging serac can let loose deadly ice block avalanches onto the route's crux. There is no managing the risk completely with pre-dawn timing and freezing temperatures because the unpredictable movement of the glacier can shrug off huge amounts of ice onto the Schwartz Ledges at any time.

Starting in January of 2016, the camping reservation system may make it very difficult for climbers to honestly and simply just hike in to the safer Kain Face when the rare good conditions occur. If this system fails to work for non-heli' climbers, then the South Face might appeal. Personally, it calms me to think of the South Glacier's serac cliff as the Kumbu Ice Fall of North America, a proven killer guarding a prize no climber can resisit.

Remember Pete Steers who worked at Neptune's? We talked just after he soloed this route. He just zoomed up from Boulder when conditions were great and thought the South Face was one of the best climbs of his career. Another good reason this route is favored by both soloists and some teams descending the North Faces is that the south side requires less travel on crevassed glaciers. 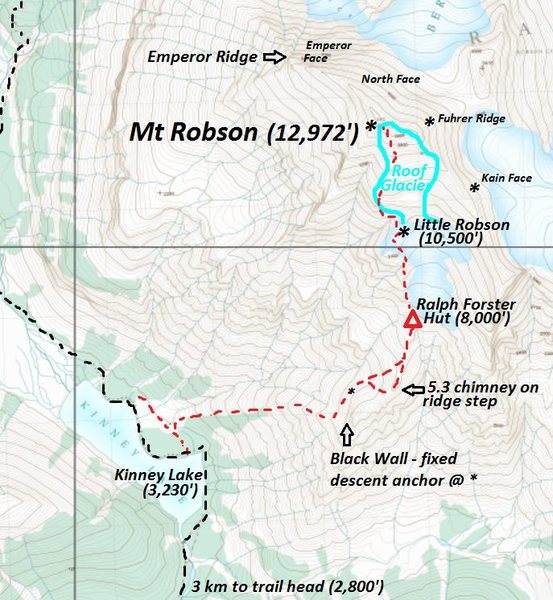 Robson's South Face Route No one else calls it the "Roof Glacier". It is really called "the Roof" (a special name for the upper South Glacier). contour interval 20 meters
The first day is usually spent climbing to the Ralph Forster Hut. After leaving the trail at the creek that drains the Great Couloir, a long climb roughly follows the steep rib forming the south boundary of the Great Couloir (GC). Leaving the creek bed of the GC is made difficult by a 100 foot rock band - dodge right.

After 3,000 of steep hiking, rock work, a ladder, and ,hopefully, cut vegetation, the Black Wall forces the route left. Cairns lead one to some wet ledges. These ledges have a rappel anchor at the top (easy 5th class). Above the Black Wall, aim right/south for the ridge-step formed by the the Black Headwall. A 5.3 chimney climbs the step and then the ridge crest is followed to the Hut (Sean Dougherty, Selected Alpine Climbs, 1991). Others have described a rising traverse left to dodge the Black Headwall.

Above the hut, the south ridge is climbed past Little Robson, scrambling with crest bypasses. Then the crux, traversing left across the low 5th class Schwartz Ledges, directly in the line of fire from the ice cliff (photos). Getting closer than 70 meters to the ice cliff is a route finding mistake! 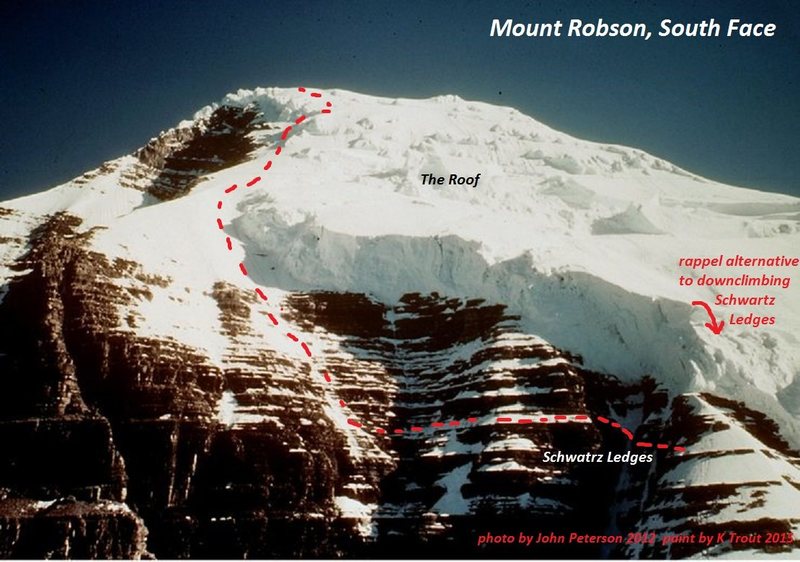 Upper South Face photo by Mountain Project contributor John Peterson 2012
Some say your only under the hazard for less than 20 minutes when the ledges are dry. 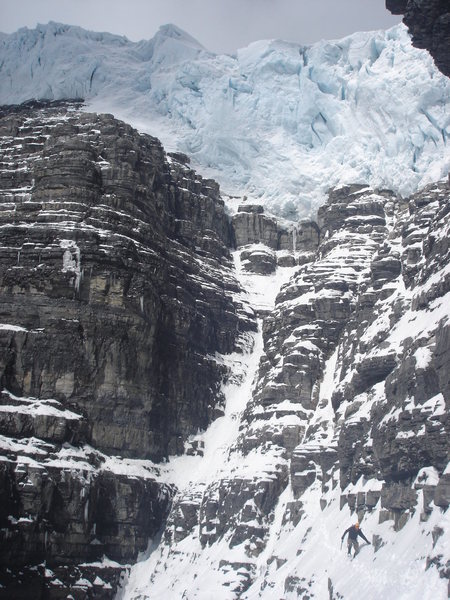 Schwartz Ledges, August 2007 "We didn't bother to stop and belay..." submitted by Mountain Project contributor Martin le Roux, 2015
Once past the calving ice, some used to do a long traverse under the Roof (uppermost south glacier) in order to join the Kain Route on the southeast ridge. Instead, more climbers seem to be going up directly via weaknesses near the ice feathers on the west side of the Roof Glacier.

Recently, there have been years where bare ice on the Kain/Southeast Ridge made down-climbing too difficult. Instead, rappels are done off v-threads west of the ridge - more directly down the roof anyway. So it seems there is no reason for the long traverse to the SE Ridge anymore.

DESCENT
Be ready to place rappel anchors in icy conditions. If instead there is snow, it may be okay to down-climb the steep upper slopes all the way to the Schwartz Ledges.

Some teams have stayed above the ice cliff, descended the glacier, and then done one or two long rappels down the serac ice cliff. The goal is to land the rappel on the ridge above Little Robson, without triggering an ice collapse.

Otherwise, you get to reverse the traverse of the Schwartz Ledges, again under the threat of calving ice.

The rest of the descent is simply reversing what has already been done. 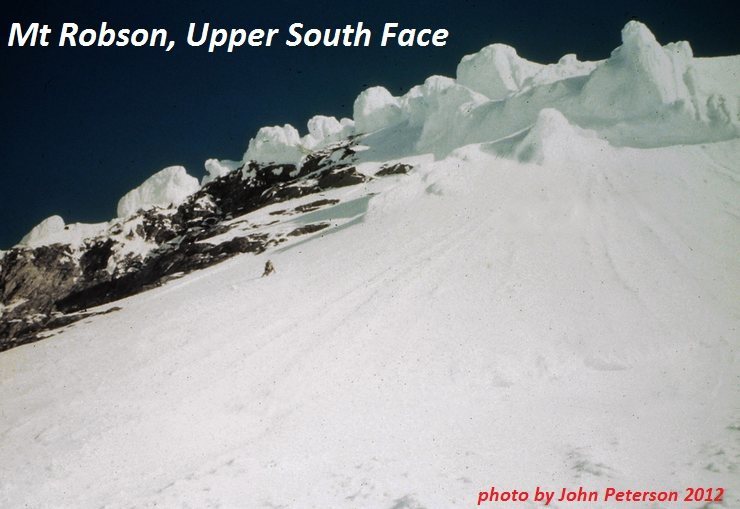 Descending steep snow above the Schwartz Ledges after climbing the Emperor Ridge! by John Peterson 2012

LINKS
To get the best current conditions check the mountain condition reports at Association of Canadian Mountain Guides.

Bill Kerr's telephoto of the ledges and serac @ Summit Post

Chris Guolet's photo of The Roof shows how the route is trending left of the southeast ridge. Also, taken from an angle that shows why the uppermost South Glacier is called the The Roof.

Someone should probably be sainted because the South Face Webcam is a miracle. 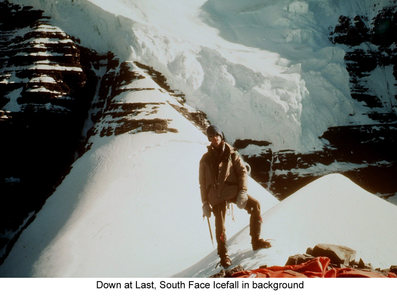 Looking back from Little Robson after rapping t… 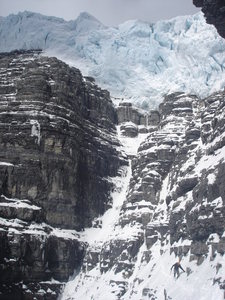 Racing across the Schwartz Ledges, August 2007.… 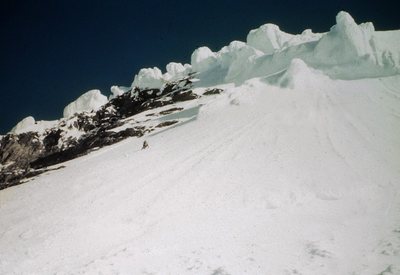 Descending steep snow above the ledges 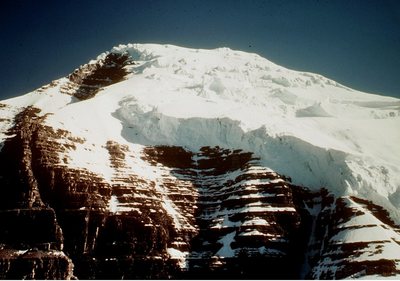 Schwartz Ledges in 1975. We had just rapped do… 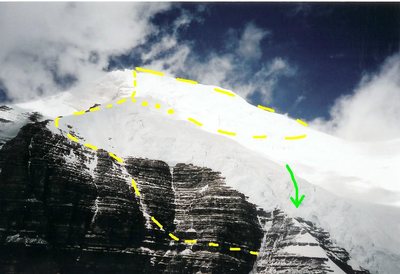 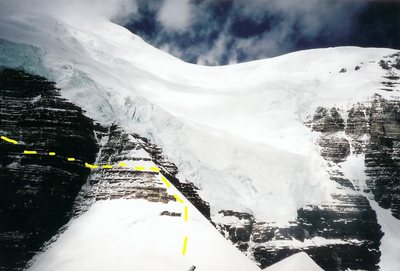 The Schwartz Ledges Photographer Unknown I… 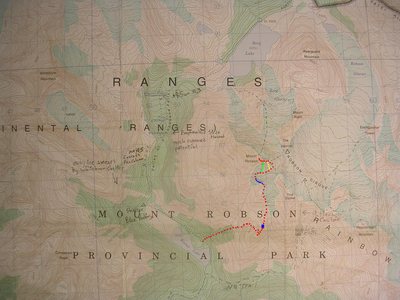