The first ascent of the Thumb was made via the East Ridge. The climb was an epic adventure, involving two of the most accomplished American alpinists of the era, Fred Beckey & Fritz Wiessner. Weissner was the first climber to explore the Stikine region, on an expedition with Bestor Robinson in 1937. The party attempted Kate's Needle, the highest summit in the region at 10,002', but were defeated by poor weather.

Upon the conclusion of the Second World War, Wiessner was anxious to return to the region. He & Beckey had corresponded regularly following Beckey's audacious 2nd ascent of Mt. Waddington in 1942, and the two agreed they would make a strong team. Unfortunately, while ferrying loads to the Flood Glacier, Wiessner slipped on a wet log and severely twisted his knee. As a testament to his valor, Wiessner persevered for several more days of load-hauling before throwing in the towel.

Fortunately for Beckey, he had a long list of unwitting partners to call on. Three weeks later he was back with two new companions. The team continued the portage, made a quick first ascent of Kate's Needle, and established a base camp below the Thumb over the course of the next week.

Several false starts, cut short by nightfall and poor weather, made for a challenging climb. Just before calling it quits, the weather finally cleared, allowing one last attempt--this time successful. Upon completion, Beckey famously remarked that this was the hardest climb he'd ever done.

The route begins from the broad snow-covered glacier directly south of Devil's Thumb. Ascend gradually steepening snow slopes and a bergschrund to the prominent "Hog's Back" snow crest.

Traverse east along the Hog's Back to a steep system of snow colouirs. Ascend the face on generally moderate terrain, aiming for a prominent notch in the East Ridge.

Just before the ridge is gained, ascend a broad slab up to the crest. Once on the ridge, traverse west towards the vague summit.

Three distinct cruxes are encountered along the ridgecrest. The first crux is getting around the prominent gendarme, visible in most photographs of the ridge. One method for passing this obstacle is to rappel down the south face (pendulum as far west as possible), and traverse west to a stance on a precarious snow ledge. From here, ascend a difficult, near vertical face, that culminates in an easier chimney, back to the ridge crest. Apparently Beckey's party traversed the gendarme to the north using a bit of aid, and the AAJ indicates this obstacel will go free at 5.9 if the rock is dry & free of snow.

The second crux entails opvercoming a short, steep headwall (fixed gear may be present here) that is downright tricky when the mossy rock is wet. Traverse right (north) under the wall, turn an exposed corner, then lead up a shallow ramp to a short step (mantle).

The final crux requires surmounting a near-vertical 30' face that climbs out of the "Rappel Notch". Once this obstacle is surmounted, traverse right around the obvious wave-shaped fin on steep slabs on the north face. Continue on easing terrain to the 'a chavel' summit block.

To Descend, reverse the route to the "Rappel Notch". Around 4 60m rappels will reach the Hog's Back. Descend to the Bergschrund, where one more rappel (from the lowest rock outcroppings) may be required to reach easier terrain below the 'schrund, and the short slog back to camp.

Full alpine kit. A bivy on the route is not necessary for quick parties. Snow anchors & ice screws may prove useful. Rock pro is essential for all but soloists. Its unlikely steep ice will be encountered in good summer conditions. Materials for building rappel anchors will likely be necessary. 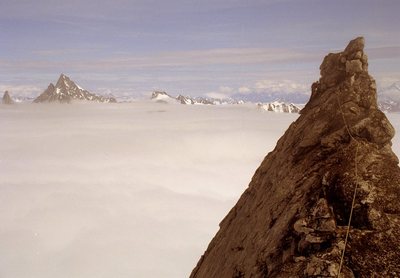 Traversing steep slabs to get around the wave-s… 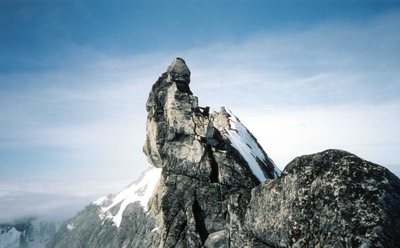 Traversing around the 'wave-shaped' fin, just a… 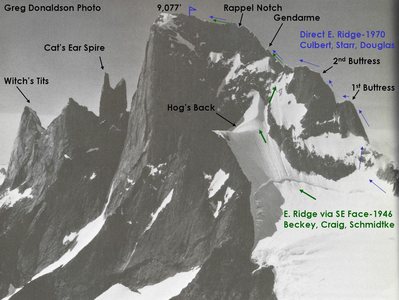 The East Ridge (via SE Face) follows the green… 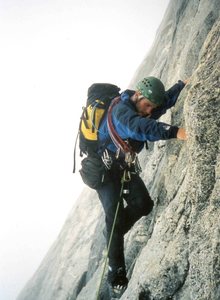 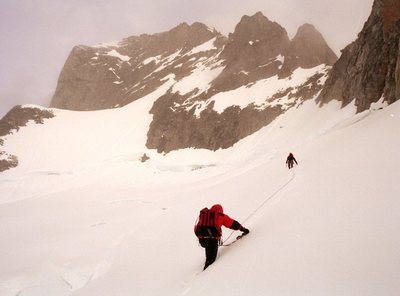 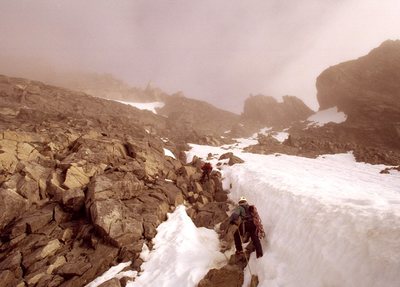 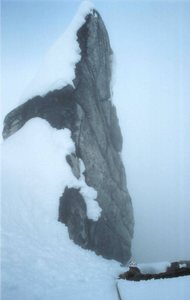 Janelle pops out of the chimney and back on to…