Few peaks in North America inspire as much reverance as the Devil's Thumb. As the uncanny name suggests this a place of turmoil, frustration, and tragedy. Despite boasting only a miserly 9,000 feet of altitude, the relatively low 3000-foot base elevation provides sweeping walls of ice and granite diorite.

The Thumb's dramatic appearance has lured climbers for more than six decades. First climbed by the prolific Fred Becky in 1946, the Thumb saw only four ascents during the ensuing three decades. As alpine standards have improved over the last 20 years, the peak has experienced a relative renaissance, though sadly this trend has resulted in a number of tragic deaths on this seemingly inoccuous peak.

Truly, this is not a peak to be taken lightly. A detailed analysis of fatalities per summit attempt would undoubtedly reveal this peak to be the deadlieast on the continent.

However, the multi-faceted monolith has a little something for everyone, and perhaps this is part of the attraction. Rock masters will be drawn to the clean white granite of the southwest buttress. Bold alpinists will be lured to the peak's wicked 6,000-foot ice-plastered northwest face, considered by many to be a 'Last Great Problem' of North American mountaineering. Old-school mountaineers can still slog most of the way up the southern slope, and those in search of a bit of everything will be enamored by the classic Direct East Ridge.

Weather on this peak is a serious problem, and trips can be ruined by pervasive storms. The dioritic granite found here is also less than ideal, with at least one fatality attributed to rock fall.

The Thumb can be approached via helicopter as described under the Stikine Ice Cap section, or via boat & foot. For routes on the North & Southwest sides, approach via the Baird Glacier and Witch's Cauldron. For the Southeast side of the peak, approach from the Ice Cap.

The original ascents of the peak were made with an approach from British Columbia, with boat passage from Petersburg, up the Stikine river to Telegraph Creek, and a long hump west over the Stikine Ice Cap, passing Kate's Needle along the way. 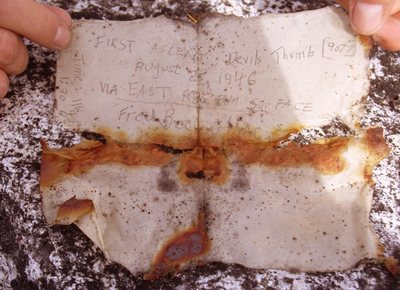 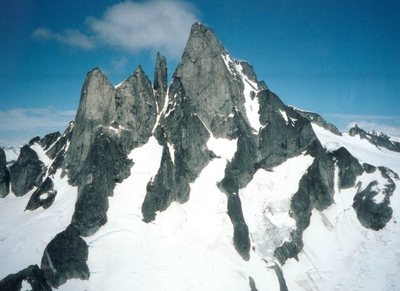 Devil's Thumb from the West. The Witch's Tits… 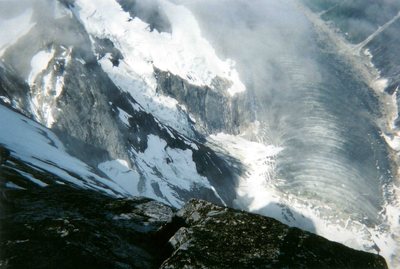 A view down the North Face into the Witch's Cau… 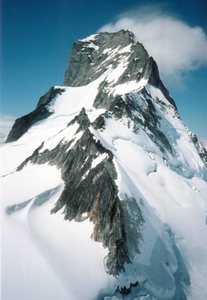 Devil's Thumb from the Southeast.

All Photos Within Devil's Thumb