The Moonlight Buttress, as it is most commonly referred to, is one of the most popular aid climbs in Zion, and, as a free climb, is perhaps the most spectacular, and arguably longest and hardest, sandstone climb in the world. This stunning route tackles the namesake feature, a proud prow of rock that juts out from the wall behind it, via a singular, peerless crack that extends for 1000 feet from base to summit and never widens to more than an inch or two... the Moonlight Buttress is a feature of unparalleled, parallel perfection.

Ed. Note: It should be noted that the route already exists in the Mountain Project database here, described at a 5.8 C1 climb, but due to a lot of requests for free climbing beta, I'm submitting this description of the route as well.

First freed in 1992 by Peter Croft & Johnny Woodward, the route was originally rated 5.13b. That rating has since settled to 5.12d, but even this reflects the overall effort of the climb and not the single hardest moves on the route. This has been evidenced by a number of onsights over the past few years, and most recently, Alex Honnold's free solo of the route in an astonishing 1 hour and 23 minutes.

The Moonlight Buttress is a sustained journey up nearly flawless rock for it's entire length. It has pitch after pitch of difficult Indian Creek style splitters and corners, a few enjoyable face climbing sections, fantastic exposure, and great belay ledges. What follows is a detailed description of my experience on the route that may provide more beta than you're after. If this is the case, refer to the free SuperTopo description that is floating around on the web, or one of many guidebook descriptions.

Approach: Drive into Zion to a bend in the road and park in the lot on the left (Big Bend parking lot), or, continue on for 500 to a paved pullout on the right. The Moonlight Buttress is obvious. Continue on foot up the road, drop down to the river, and cross near a huge boulder on the far side. Pick up a great climbers trail to the base of the route. Begin the route well to the left by scrambling up a 4th class passage to the first belay. The approach takes about 30 minutes.

P3: 5.11c, 50. Gear: 4 draws & a #1 Camalot.
Traverse right and slightly down. The hardest moves, a step-down/stand-up sequence, come quickly on the pitch. A bit frightening for the second. The bolts on this pitch could use updating. Continue to a bolted belay on a ledge.

P4: 5.10-, 90. Gear: 3 of each cam, slings & draws.
Head up and right on a thin flake, then traverse back left below a roof to a corner. A difficult move here (easier if you're tall) leads to a stance below a bolt. Above the bolt, step left to easy terrain (straight up is 10+). Runner gear well on this pitch as it wanders significantly. A bolted belay is above on terraced ledges and the Rocker Block.

P5: 5.12, 100. Gear: Full rack less the 0.75 Camalot. Slings & draws.
This is perhaps the single hardest move on the climb: A 12b boulder problem off the Rocker Block. My solution was to hang draws on the first bolt or two and carry only one extra draw on my harness, do the moves, then lower a loop of rope to bring up the rest of the rack. In any case, leap sideways off the Rocker Block for the obvious hold up and right. Match, and throw right to a good hold, clip, toe in on the lower handhold, and mantle up to a decent stance. One more hard move leads to a good rest at the base of the long, left-facing corner. Lieback like mad to the anchor  a two bolts out right at a stance.

P6: 5.12+, 100. Gear: Full rack less the #1 Camalot. At least one sling.
The enduro pitch. The crux of the route is absolutely hanging around placing gear on this sucker. Lieback to a handcrack pod. Place high and continue to lieback through a very thin section to a flare. Some jessery may be possible here, but inevitably, jam upwards, clipping the aid anchor out left along the way (or not), switch cracks to a system on the right and continue to lieback on easier ground up to the roof and a bolted anchor out right. The semi-hanging belay here under the chimney is the only uncomfortable one on the route.

P7: 5.12-, 100. Gear: Green Alien w/ draw, draw for the bolt, 0.75 Camalot, all 0.5 & 0.4 Camalots. No wires.
This is a great, wild pitch. It is also much harder than the rating would indicate. Place a Green Alien to protect getting into the chimney, and then pull into it and continue up left side in past a bolt. Moving up reminded me of the moves getting into the Harding Slot, more sustained albeit much easier. Eventually the chimney begins to open up into a right angle corner and the knee bars start feeling less and less bomber. A 0.75 Camalot in a pod here protects a strenuous move switching from a knee bar into a jam and then into a lieback. Once liebacking, one can motor up a long 0.5 Camalot section. 0.4s can be placed higher. Rack on the left side. Climb to the Bivy Ledge and a bolted belay. Crazy exposure!

P9: 5.12b/c, 110. Gear: Full rack (including wires) less the #1 Camalot and two of the smallest cams. One or two draws.
Splitter rattley fingers to sit-down rest. The tough stuff is only about 20'. After the rest, a thin crack & pin scars (cool move switching cracks) lead to a bolted belay on a narrow ledge out right.

P10: 5.12a, 190. Gear: Full rack (including wires).
The Nutting Pitch. Tricky face climbing up the zig-zagging cracks past wedged blocks leads to cruxy, sandy locks to a no-hands knee bar rest. This whole pitch is pretty awesome, and after all the pure jamming/liebacking, the 5.12 face climbing almost feels easy. Almost. Skip the anchor and continue through a sandy 5.10+ roof and on up cracks and knobs to lower angle top out.

Descent: Walk off via the Angels Landing trail. This is 2 miles of paved trail to the Grotto Picnic Area which is 1.5 miles down the road from Angels Landing. Alternatively, rap (see below). Walking off is much faster.

Miscellaneous notes: The route gets sun at around 9 AM and goes into the shade late in the afternoon. The route can be rapped entirely with a 70m rope except for the second-to-last rappel directly down the face (not following the route). Some creativity here might allow rappel with a 70m rope. Regarding ASCA work: Most of the anchors on this route have been replaced/updated. The route currently needs: the Rocker Block to be re-secured, and for the second-to-last rap station on the face to be relocated downwards by 30 feet or so (to allow rappel with a single 70m cord). 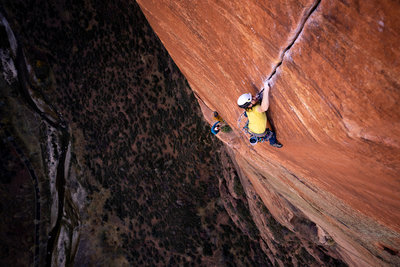 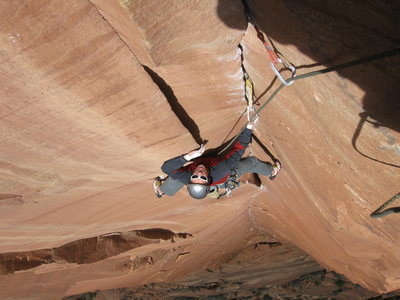 Nearing the top of the crux pitch 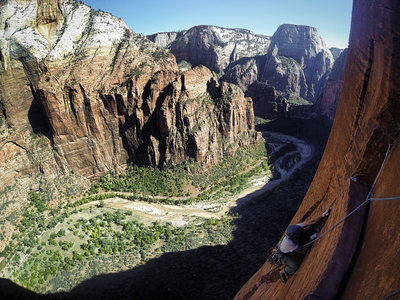 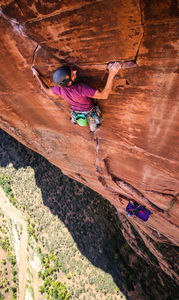 Jon Winiasz on the Nutting Pitch 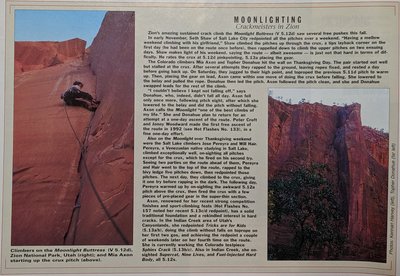 What the crux pitch looked like back in '96, vi… 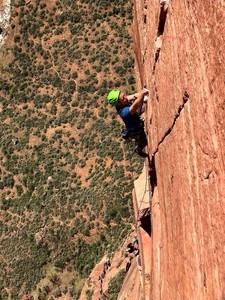 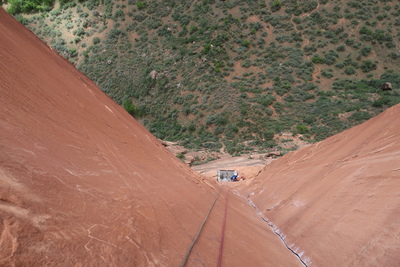 Looking down the grand dihedral after cleaning… 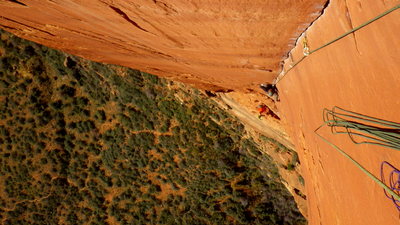 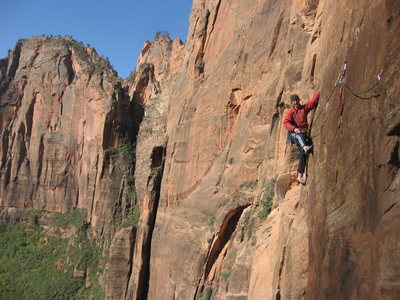 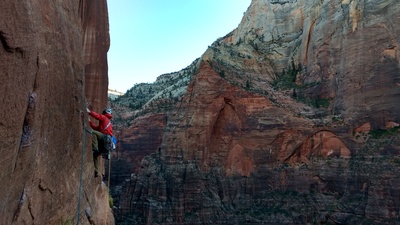 the traverse pitch early in the morning 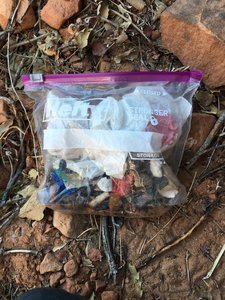 A bag of micro trash from the Rocker. Please do… 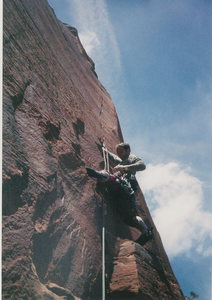 Killer 12a splitter above the Slot Pitch.

More About The Moonlight Buttress (Free)