Per Michael Schneiter: it's worth noting that access to climbs in Glenwood Canyon is difficult to impossible currently. Following this summer's Grizzly Creek fire the exits and rest areas for Grizzly Creek, Shoshone and Hanging Lake have been and remain closed. The bike path is also closed. That leaves climbers with no great option for parking and climbing Hidden Falls, Glenwood Falls and the others. There may be some workarounds, but they aren't easy.

Glenwood Falls rears 600 up the hillside just to the north of exit 105 in Glenwood Canyon on I-70. Traveling westbound on the interstate, you only get just a glimpse of it as you come out of the tunnel. No worries though, cuz you have to go down to exit 128 to turn around anyway. Traveling eastbound on the interstate, one would take exit 105 in order to get to the parking area for the climb. The climb is big, and it is right beside the highway. So, it makes for being one of my favorites in Colorado.

One very serious caveat though is that this is a south-facing climb, and it has lots of ice daggers at the top. So, if there is any sunshine lurking about, dont even contemplate climbing here. Go away and live to climb another day. Based upon many of my frustrated observations; sunshine hits the top of the wall in winter at approximately 9:00 AM, and fully bathes the wall by about 11:00 AM. There are many variations that can be climbed, with the easier climbing to be had on the right side and the harder stuff mostly on the left. Of course, this is going to vary from year to year.

To get to the climb from the parking area, walk west, as if exiting the parking area and heading back out on to the interstate. Almost at the point where the exit ramp joins the interstate, hop the concrete barrier and head uphill through the first major talus slope. Trend to the left as you head uphill, eventually crossing over into the talus slope beneath the climb. Notice the metal posts that the DOT has rammed into the slope to prevent ice from crashing down on to the highway.

All of the climbing basically starts from the same place, no matter which variation you are going to finish with. So, for the first two pitches or so, everyone will be going the same way. After climbing two pitches; the first is through sort of a gully which yields to a lower angled slope above. Above the slope, climb a steeper pitch to reach a ledge system, from which several options for reaching the top are available.

Traversing to the right along the ledge will lead to a lower angled gully/ramp on the extreme right. The gully/ramp may be followed to the top (2 pitches), or a steeper headwall on the left side of the gully/ramp may be climbed. The ice along the ramp can be disconcertingly thin; verglass over rock, leaving one with a much more tedious ascent than the angle would otherwise suggest.

From the ledge at the end of the second pitch, one can also choose to continue straight up. Continuing straight up can yield two options, depending on conditions. A single pitch from the second ledge will lead to a third ledge where one can choose their pillar (left or right) to gain the top. Either way, the pillar(s) is not so long, but the surprise is in the finish. Continue upwards, trying to gain the trees. This can leave one trying to cover almost half a rope-length of steep frozen mud and snow without the prospect of much protection. I dont think this part changes much from year to year. So, the best thing might be to stop at the end of the good ice and make an anchor there instead of trying to gain the trees.

When you are finished, rappel the route. With a pair of 60 meter ropes, it is two full rappels to get back down to the lower-angled snow slope at the top of the first pitch. Another single rope rappel (60m) will get you down from a tree on the climbers right of the snow slope back down to where the packs are. There will be 20 or so of down climbing left from the bottom of the last rappel, but this should be through snow, so it is not such a big deal. As an alternative way down, the Jack Roberts guide mentions a walk-off to the left, but I have never taken it. Enjoy!

Basic ice rack; maybe supplement it with some rock gear (pins and stoppers) for the gully/ramp system on the right or if the ice is thin. 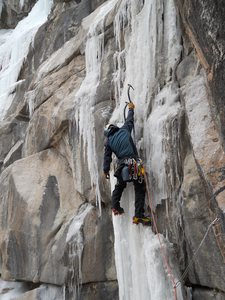 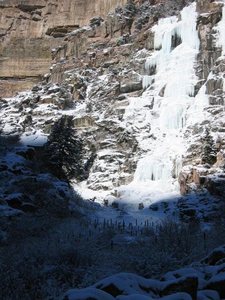 Pretty sunshine, but stay away in these conditi… 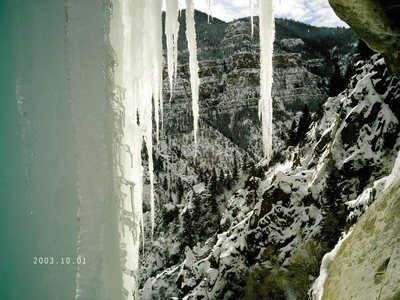 Inside the ice cave. 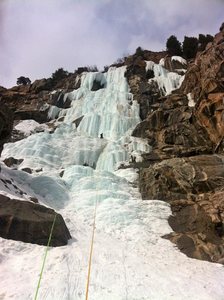 In there some place. Love those 70s. 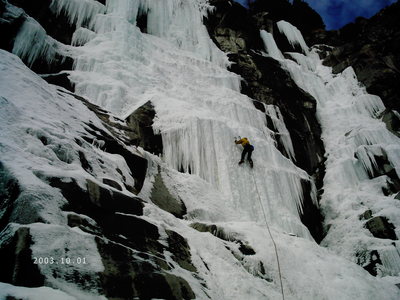 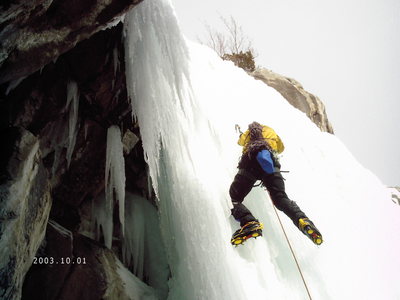 Julian soloing the last pitch just outside of t… 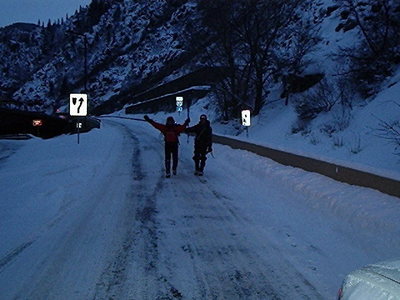 Welcome back... now for some hot chow and a dip… 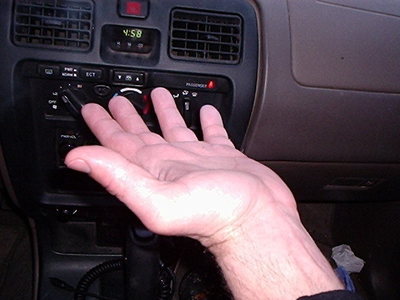 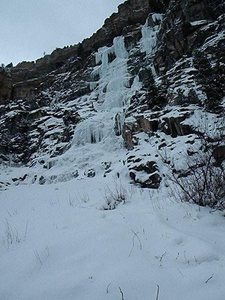 Looking up from the bottom of pitch 1. 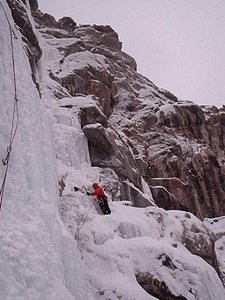 Climbing the gully/ramp on the right side. 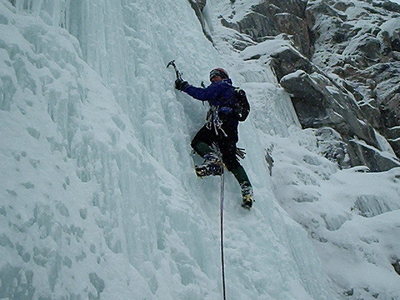 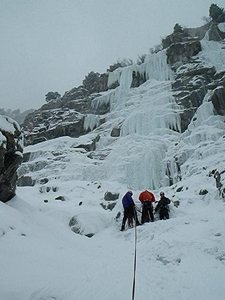 Top of first pitch... at the top of the snow sl…