This is a classic long-day alpine route on good rock with some unique features, not least of which is a Tyrolean traverse. Most people start from an obvious crack in a left-facing dihedral (as seen in Mike Morley's picture here near a big grey scar, some distance (300'? 500'?) from the base of the snowfield and the start of Dark Star. The main drawback is the descent through Contact Pass, though you could bypass that by traversing to Gayley and Sill...

This route has many variations and it's wise to take a topo unless you've climbed a lot on Temple. A good topo can be found in Croft's book or the High Sierra Supertopo book (the latter has some errors). However, Bruce Bindner (R.I.P.) posted a better topo right here; it's the best I've seen and you will appreciate it once on the route.

The rock on the route is overall pretty solid, but there are plenty of loose blocks that could kill you if you got careless. It would be a good idea to start early (regardless of whether you plan the ascent car-to-car or from a camp site) because Temple is plenty exposed to electrical storms. When Scott and I climbed the route, a storm blew in after we had passed the crux, my hair stood up, and the rope started making crackling noises... luckily for us the storm changed directions and did not get any nastier. Check the weather beforehand!

The first pitch of the route can be seen in Mike Morley's picture among the 'Beta photos'. It is near a large grey scar and a says uphill from the toe of the Dark Star buttress. It's a good idea to start early and go fast, because the descent requires some attention; Contact Pass is unpleasant no matter how you approach it. A single-rope rappel from the rightmost rappel station should plop you down onto the scree, and from there it's mostly slogging back to the snowfield and your campsite (or the trail and your car).

If you're camping, a good idea is to pitch your tent at Second Lake, and then walk over in the afternoon to kick steps in the soft snow leading up to the base of the route. In the morning the steps will have hardened. Going car-to-car, a set of lightweight aluminum crampons will be helpful in early season.

Alpine rack -- some nuts, a few cams, many slings. 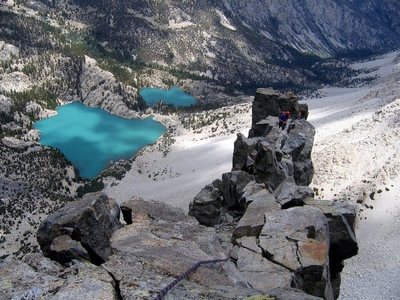 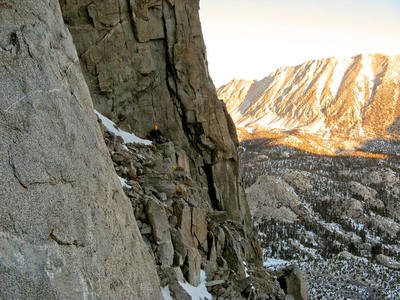 Adam waits at the bottom of the climb for Sun-R… 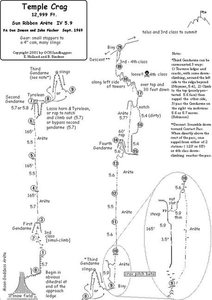 Topo of Sun Ribbon Arete, showing a few of the… 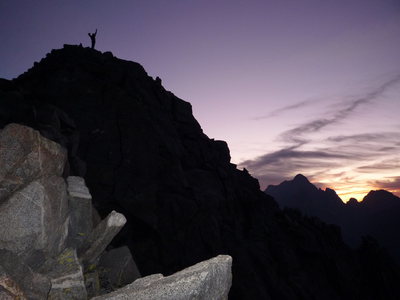 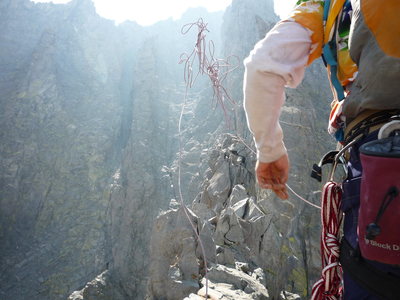 Heave! for the Tyrolean. A flying octo-cluster… 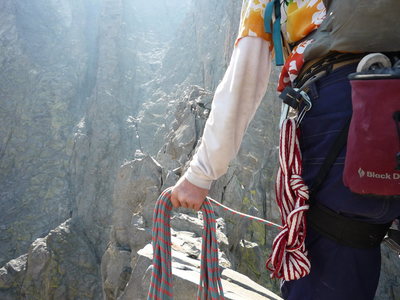 Ready! Poised to huck for the granite spike tha… 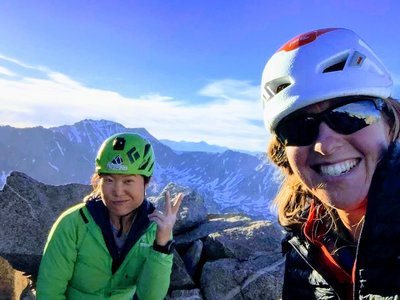 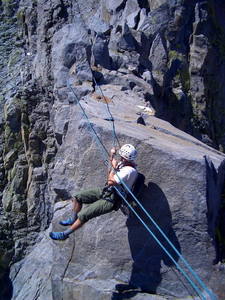 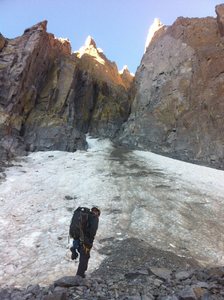 Looking up at the snow field below SRA. Decided… 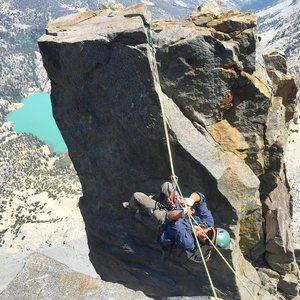 Tyson harnessing his inner-Stallone on the Tyro… 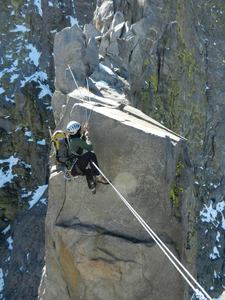 Tyrolean is optional but fun :-) 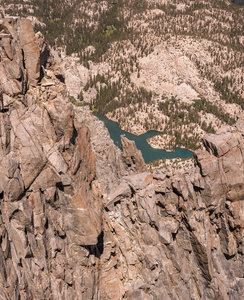 If you look closely you can see a party on the…