One for the Red Team

Just left (West) of this variation, there is an large, overhanging, left-facing dihedral. The two-star rating accounts for the moss and lichen. If it were cleaned it could become a classic pitch.

This dihedral once started with some moss and lichen on slopers, but becomes much more secure after the first 15'. There is not much lichen or moss left according to recent accounts, the rock is really quite good and the moves are really fun.

Climb the wall on the right to move up and into the crack. This is a tad insecure for 15' until you step left and start stemming and jamming your way up the dihedral and through some overhangs and grooves until you are 100+ feet up and at the end of the dihedral. There are good feet out on the left for all overhangs, so the grade remains mellow.

At the end of the dihedral, step out left toward the arete for a move or two, but be careful to avoid the 1000+ pound death block on a ledge near the arete. Climb up a featured face from there, getting protection as necessary (but not necessarily as desired) and go to a large ledge with gear for a belay.

Continue to the summit on the South Face route. 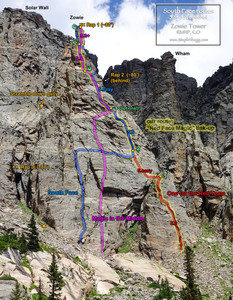 A route overlay of Zowie. 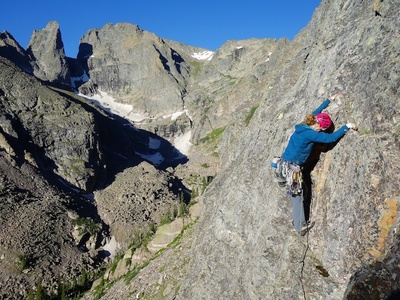 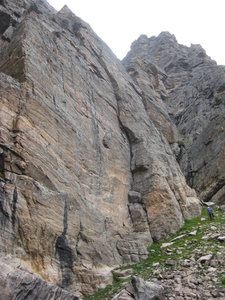 Another look at the direct start options with a… 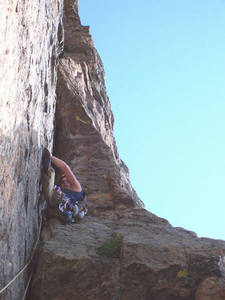 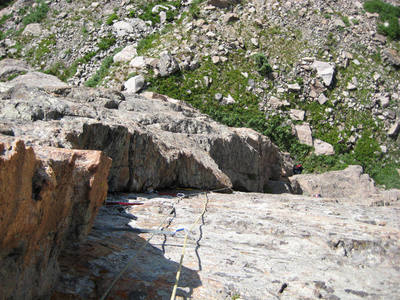 Looking down on the direct start pitch 1. 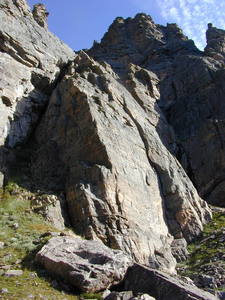 The small flatiron to the lower right of the So…

More About One for the Red Team