I was one of the indignant climbers (see Steve Levin's comments in the introduction) who hoped to remove the bolts on this route (a very early fall snowstorm stopped Mark "Prybar" Wilford and me from the dirty deed itself), I finally climbed this a couple years later, sans prybar, and found it to be not only nothing like the sport route I was expecting but also one of the best routes I have ever done in the Park. The rock is nothing short of perfect for most of the route. Try to catch this as soon as it dries out, hopefully in early July, as the sun will be on the face for much of the day. A few short weeks later, the sun exposure is considerably less. A reconnaissance visit to Spearhead in June will tell you if the face is in condition or not. After two ascents of this climb, I can state with confidence that the crux is actually gaining the cliff, but then I have always had a thing about snow....

P1. This is not so great actually, but good, and at least it gets you away from that wet sloppy white stuff. Save a hand-size cam or two for the belay.

P2. After some initial thin moves right by the belay, there is a thin runout slab with inobvious moves, before a long and unprotected traverse left (5.7X) on a big ledge system. This pitch introduces you to the delights in store above.

P3. The meat! After some thin moves at moderate 5.10 past a couple bolts, traverse left, very thin, to a bolt, from where committing 5.10 moves lead up, up and up into apparent blankness. The bolts zigzag some, so consider using one or two longs slings (or even old-style double ropes). This pitch ends up wildly runout toward the top, with many opportunities for getting irreversibly stuck offroute.

P4. (5.10). More of the same. By now you should be used to the nature of the climbing. There are just enough bolts to tip the balance in favor of continuing upwards.

P5. If pitch three is the meat course, this is the dessert, a Creme Brulee delight of face knobs and bullet edges up the White Streak. This maintains a heavenly 5.9 standard for the whole ropelength up this perfect boilerplate face. This pitch is comparatively well-protected, but divide six bolts into 150 feet and you get, um, well you still get a pitch not to be trifled with. By the time you reach the lonely belay foothold at the end of this pitch, it should be more or less raining, so you may be feeling that you can retreat without shame. Above, there are two more good sections, but a lot of filler, so you may be right.

P6. After yet another runout on thin face (surprise!) past a couple more bolts, you gain merely good 5.7 climbing in a dihedral.

P7. This is a short, nondescript pitch.

P8. This is the after-dinner port. If the rain has not set in yet, this pitch is actually real good, with tenuous 5.10 laybacking up a sharp arete. Plus the bolts seem closer together here than usual. Unfortunately the fun runs out all too soon, and unless you want to lower off a single bolt at this point (the fifth bolt on this pitch), you have to wallow up another one and a-half pitches of mank (at least compared to the rest of the route) to gain a final set of rap bolts at the top of the cliff. This is worth it for first-timers.

The pro is mixed, about thirty bolts in all, but this ain't no sport climb. Bring a rack up to maybe 2.5", and expect to run it out somewhat on 5.9 terrain, and to run it out wildly on easier terrain. The belays are all (except at top of first pitch) bolted. Rap the route. Double ropes are helpful, as is some routefinding skill and confidence. 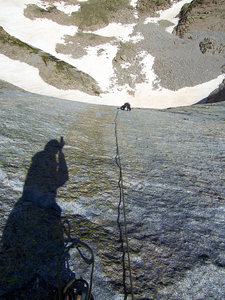 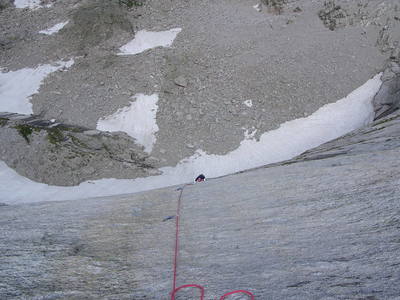 I forget what pitch this is. Somewhere after t… 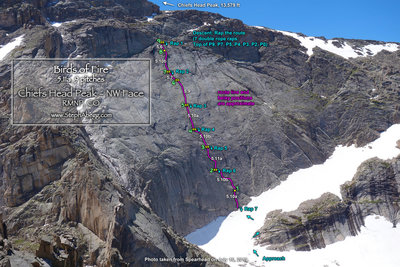 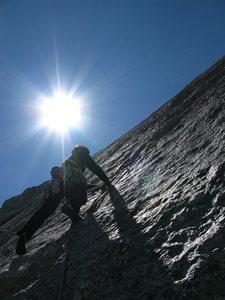 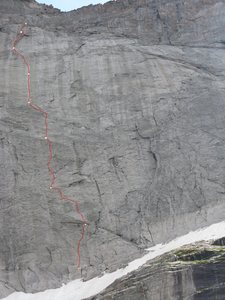 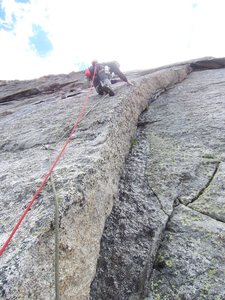 Jeff G. is slapping his way up the intimadating… 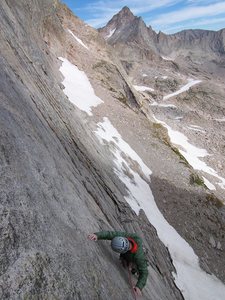 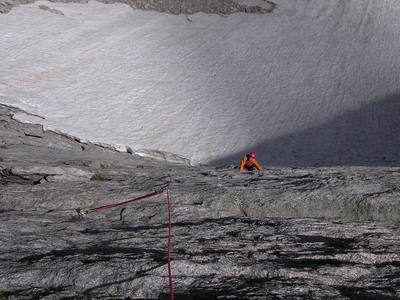 Lots of rock, lots of snow. 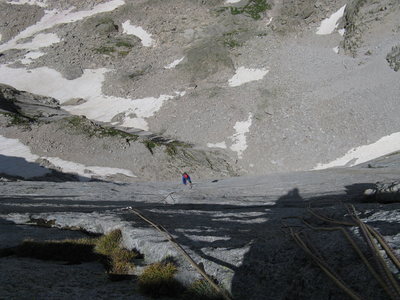 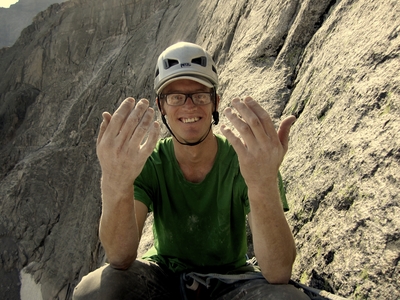 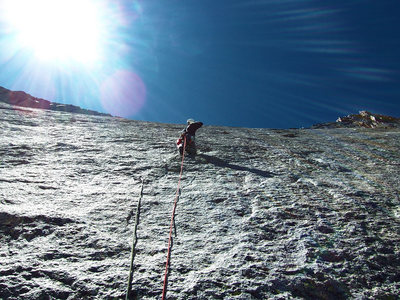 Jeff G. is looking for the next bolt on P4. Kee… 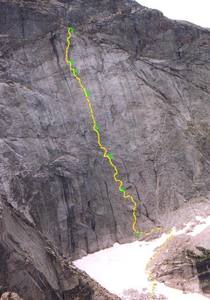 More About Birds of Fire