This is a fun chimney on the west side of Green Mountain Pinnacle. According to legend, during an early ascent by Gerry Roach and Chris Haaland, a live concert was in full swing down in Folsom Stadium. As they were leading the crux, they could hear "Takin' Care of Business" and they started cranking up the chimney to the rhythm of the song.

Hike up north of the pinnacle (see rock for details), past Death and Transfiguration. Head up towards an obvious chimney, which is not hard to get to but requires some routefinding to keep this 3rd class. Rope up in the bowels of the chimney itself, or lower down if you like.

Now simply head straight up the chimney to the summit (only about 60'). This is a serious pitch with only one spot for protection, however as chimneys never seem to be given "S" ratings I have kept with tradition here. It is perfect width for chimneying, and it would be hard to fall if your technique is decent.

From the summit, rappel 80' NW from some bolts to the ground (ending about 50' west of the base of D&T).

From Mic Fairchild's submission: Out of the 250 routes in the Gerry Roach guidebook, this one rates among his TOP TEN. It is certainly the best chimney climb in the Flatirons. Consider approaching by climbing the Fourth Flatiron. The descent from the top of piece three takes you past the Challenger to GMP. You can also traverse across to GMP after you walk thru the huge gash to the top of piece two. Although only 60 feet high, it's as classic as they come.

Spot the obvious chimney below the summit on the North side of the rock. It is uphill of D+T. Scramble up 30 feet into the chim and off you go. No one has gotten lost thereafter. To descend, downclimb Green Sneak, or rapp 80 feet NW to the ground.

Light rack. There is very little pro on this pitch, I recall placing only a #1 Camalot and another small cam about 2/3 of the way up.

From Mic Fairchild's description: There is an old piton midway up, and a crack there at the 40' mark, but otherwise no pro in the chimney. 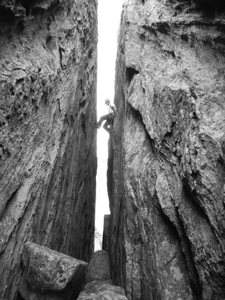 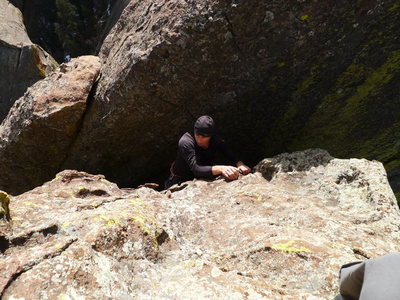 The jugs at the lip. 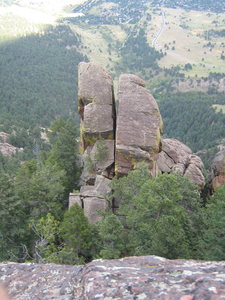 The West Chimney as seen from East Face/Challen… 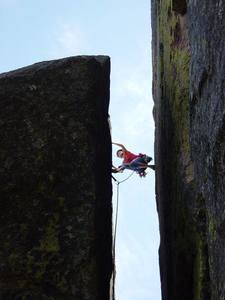 Christa nearing the top of the chimney. 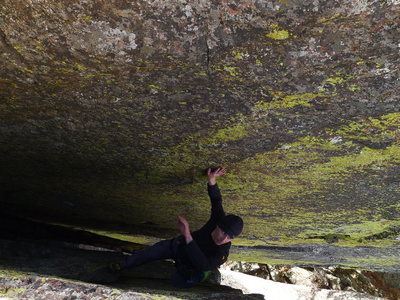 Ryan in the chimney. 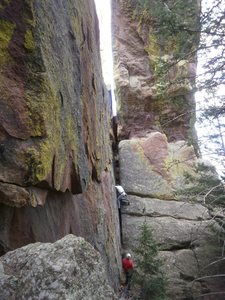 All the descriptions mention starting on the No… 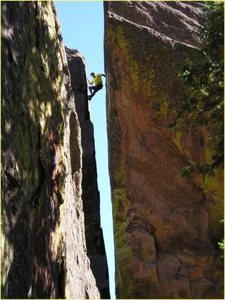 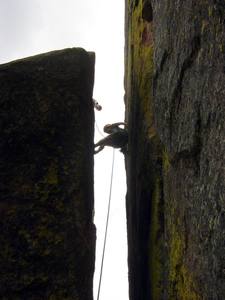 Sam near the top 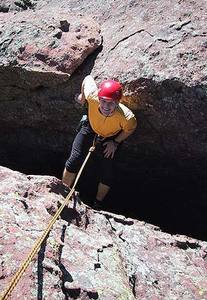 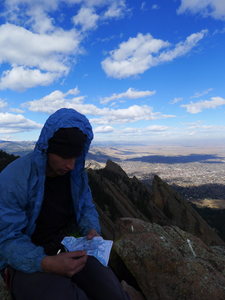 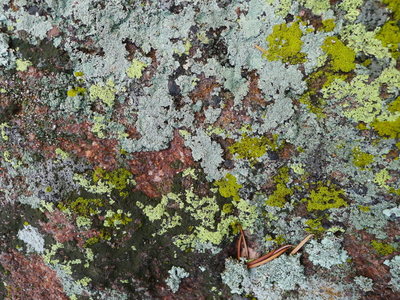 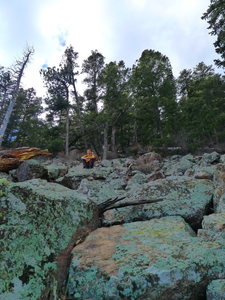