The Banshee Wall is the obvious 650 foot wall above the Lower Slabs. It is an intimidating, sheer face with mostly good rock but has its moments of a bit of less good rock.

The best approach to Banshee Wall isn't obvious but it avoids any fifth-class scrambling and is quite direct. The hike is 1.8 miles and ascends about 1,400'. Allow for 1.5 to 2 hours the first time you hike it.

Hike the Porvenir Canyon trail for about 1.2 miles (a short distance beyond the cable suspension bridge crossing.) Leave the trail heading up the steep slope on the right. There isn't any landmark for where to leave the trail so use your best judgment and a topo map. Hike up the slope generally heading north staying to the right of any rock outcroppings. Cross over a couple of faint ridges while hugging the rocks on the left up a steeper, looser slope to a prominent rocky ridge. Look for intermittent cairns marking the way. Aim for a slit/notch with a large tree in it in this rocky ridge and cross the rocky ridge in this slit/notch.

On the other side of the slit/notch descend a short bit to a major, wide ledge system with trees. Follow intermittent cairns with one very short bit of fourth-class climbing in a chimney. Then cruise the big ledge until you're underneath the Banshee Wall. There is a final low 5th class chimney/face section to get to the very large tree on the ledge at the center of the face. Shoot for that.

Alternatively, follow the Porvenir trail from the Hermit's Peak parking area until you see the obvious wall on your right. The Lower Slabs approach gives additional details. Getting to the base of the Banshee Wall from the Slabs is a bit of a challenge. We came in from the far left on a series of ledges and did quite a lot of marginal 5th class scrambling.

Another approach option would be to climb one of the The Lower Slabs routes and then work upwards towards the face on ledges. There is a final low 5th class chimney/face to get to the very large tree on the ledge at the center of the face. Shoot for that.

With two 70m ropes do three rappels down the La Llorona route:

Once on the ground, the lower slabs can be rapped off of nice bolted anchors if you can find the top. Take webbing and rap rings. Alternatively, walk east on the major ledge system looking for a sneaky notch in the major east ridge. If you find this notch, it's an easy descent down the loose slope east back down to the main trail.

Sun Angles Details:
Routes Mostly Face: Southwest
Sunny Roughly 12pm to 8pm during high season
6am
8pm
Details: The wall faces SW so it's shady until around noon in summer. 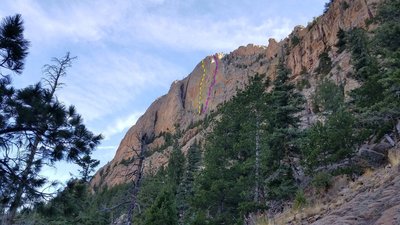 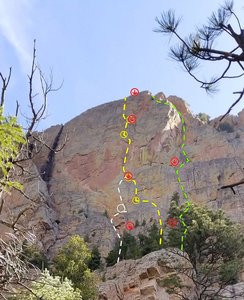 Banshee Wall from the Lower Slabs. The rappel d… 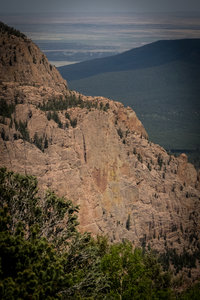 The Banshee Wall seen from across the canyon on… 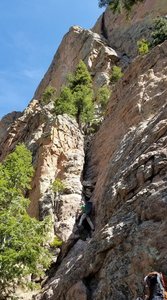 Some of the approach scrambling. Half the chall…

All Photos Within Banshee Wall