Routes in The Bear Gun

A small but nice dual summit tower located away from the base of the large Coconino walls.

As the story goes, in 1885, Richard "Bear" Wilson was excited by the tracks of a monstrous "grizzly" bear near present day Sedona, and was planning to hunt the animal as soon as his bear gun got back from the shop. But when Wilson saw the bear, he couldn't resist and went after it with only his small caliber rifle, shooting it multiple times. Throwing all caution into the wind he followed the wounded behemoth up a small box canyon. This was not fortuitous. The mama bear charged him and he attempted to shelter in a tree but she pulled him out. Wilson fought with his knife and wounded her further, as evidenced by the large trail of blood later found leading away from the scene. His knife was nowhere to be found and it was presumably lodged in the animal. In the end, she removed part of Wilson's face, and left him to die face down in the muck.

Years later, Fred Thompson, Oak Creek Canyon homesteader and Wilson's one time employer, found the remains of a huge bear on top of the mountain, ostensibly the same one. The consensus is that Wilson mortally wounded the bear, so they named her final resting place in his honor.

The moral of the story is: if lacking the proper gear, you should still go for it, but sometimes it might not go your way. Or something like that.

This tower was first climbed by Cameron Kern (famous for taking a 90' slab fall on Dresdoom!) and Pete McFarland in the early 1990s via a route called "The Lift is Still Turning" on the south Face - 2 pitches, one traversing east and one going up to the top, 5.10.

The first ascensionists didn't name the tower so I decided to call it The Bear Gun because it somewhat resembles a double barrel shotgun (from the right angle), but mostly because of the history of Dick Wilson, and his calamitous ending due to the lack of his bear gun.

Take the North Wilson Mountain trail for about 15 minutes. Go up the bowl on the south side of this tower (bushwhacking) until you reach a very nice saddle between the tower and the main wall. Plan on 45 to 60 minutes if it's your first time.

I've tried going up the bowl on the north side of the formation and it requires steep loose scrambling and just as much bushwhacking. 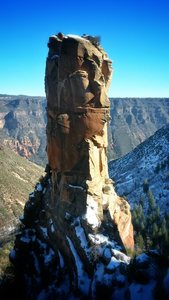 The Bear Gun from above the saddle 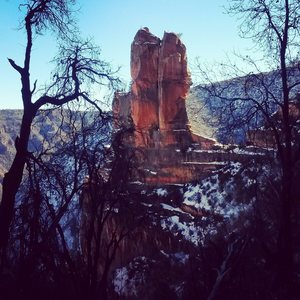 The Bear Gun as seen from the northwest.

All Photos Within The Bear Gun


More About The Bear Gun