While it is well known for being the surfing jewel of the pacific, as well as a honeymooner's paradise, few would associate Kauai with rock climbing. I would best describe the island as a giant pile of rock. Loose blocks, petrified mud, and rampant vegetation constitute the vast majority of the exposed rock the 552 sq. mile island has to offer. Rock scouting efforts prove difficult; what precious little stone there is lay guarded by the wildly undulating terrain, swampy humidity, tenacious mosquitoes, and erratic weather. Most of the legitimate multi pitch opportunities, stretched out along the sheer and crumbly cliffs along the Na Pali Coast, promise a quick death. Nevertheless, the garden isle is not without its fair share of plumb lines, and the adventure is waiting for those who are willing to endure some unique difficulties.

Kauai is an island of adventure in every aspect. Even the people who live here offer much to discover, and if you have ever wanted to awaken your 7th chakra or converse with entities from the 5th dimension, you are only a conversation or two away from a bonafide expert. The demographic itself has evolved into an ethnically eclectic medley of humanity, the numbers of which ebb in conjunction with the winter swells, which as the locals say, travel untouched thousands of miles straight from Russia. While the massive winter waves can light up the coasts with surfers and events, it makes climbing along the coast mostly inaccessible. The ocean claims many casualties every year, tragedies that are often preventable with a little more circumspection. You have been warned.

For the diehard rock fiend, the majority of the climbing experiences to be found on this island are interspersed along the beaches. Several oceanfront cliffs, hardened over centuries of erosion, offer puzzling climbing on secure, grippy rock. Excluding the Dragon's Breath area, these areas mostly offer cushy sand landings. Crash pad rentals are available per day or week (contact the author).

For those with a bit more cash and time to burn, the hallowed Na Pali Coast offers unforgettable Deep Water Soloing experiences. You will need to either kayak for several miles, or charter a boat.

Those looking for a roped experience had better be ready for an epic. When climbing on virgin rock here, be prepared for holds to pop off without reason, as well as entire blocks to shift or detach. While some of the hanging gardens of rock you'll discover on your journey around the island may seem crag-worthy, they are often no more than loose mud conglomerate, have utterly impassible access, or are constantly soaked. A bolted crag, (the only one of its kind on the island) at a limestone quarry is under negotiation to be rebolted and reopened to climbers. In order to maintain a positive rapport with the island, please consider cleaning up any trash you see as you climb, and keep music to a minimum.

The only airport on the island is in Lihue, near the south side.

Mountain Project's determination of the classic, most popular, highest rated climbing routes in this area.
More Classic Climbs in Kauai » 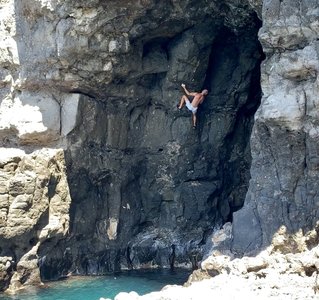 Excellent summer DWS on the north side of the i…

Oceanside bouldering on the Garden Isle!

All Photos Within Kauai