Almaty is the former capital and the largest city in Kazakhstan. It is situated at the foot of Tien Shan mountaiuns and from the city you can see the snowcaps of the surrounding mountain ranges. If you love mountaineering, there is Talgar (5017m), Komsomol (4376m), or Big Almaty (3684m), as well as, an abundance of rock climbing. Situated at about 1000 m above the sea level Almaty has an excellent climate and is surrounded by huge apple gardens. The name Almaty is from the Kazakh word Alma which means an apple."

Almaty is Central Asia's most cosmopolitan city with a wealth of shops, restaurants, hotels, and casinos. It is a city of modern architecture, parks, fountains, and spectacular mountain views. Much of the city's architecture is a legacy of the Soviet era. The city is populated by 1.2 million people of different nationalities: Kazakhs, Russians, Ukrainians, Koreans, Germans, Tatars, Uzbeks, and others. The main languages in Almaty are Russian and Kazakh.

The best way to get into Almaty is to fly into Almaty International Airport. The airport connects with Moscow, London, Frankfurt, Amsterdam, Istanbul, as well as many other cities. 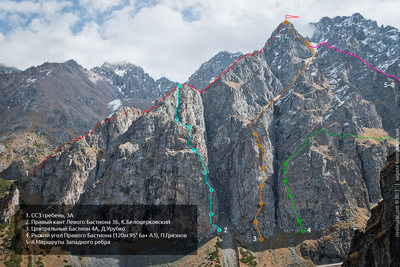 All Photos Within Almaty