A South-facing, sunny crag, smaller than Wintour's leap or Shorn cliff but still a worthwhile area for a day or two, with a selection of trad routes up to 40m in height. The cliff is split into two (left and right) by the well-maintained '365 steps' footpath, which winds its way up the cliff to the Eagle's Nest - a vantage point at the top of the cliff with spectacular views across the valley. Look out for climbers on Wintour's Leap from the top!

The rock is limestone and generally sound, but beware of people knocking large rocks off after topping out! The best routes are in the VS - E2 (5.6 - 5.10+) range.

It is possible to rappel from tree anchors at the top of many of the routes, but the anchors are of variable quality. Also check the length of the rappel - you'll make it down most but not all routes on a single 60m (no problems if you have 2x50m, of course). Alternatively, climbers' paths from the topouts lead to a main trail across the top of the cliff and a decent via the 365 steps path.

Wyndcliff is on the Welsh side of the valley, West of the river. From Chepstow, follow the A466 North, passing the Racecourse. There is a parking area on the right, about 0.8 miles after the small village of St. Arvans. 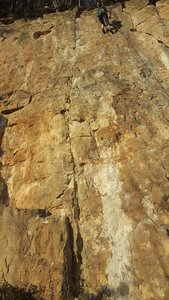 Climber on the anchors shared with a sport rout…