Solid Triassic Diabase bouldering on Pennsylvania State Game Lands 157. with everything from slopers to crimpers to slabs to cracks on ratings from V0 to V10+. Landings range from good to terrible with most problems surrounded by rocks.

The climbing is entirely in the woods with generally poorly marked trails you may find hundreds of quality, established problems exist, plenty more to be explored.

Friction seems to pop in cooler temperatures making early spring and late fall the ideal seasons for this area.

Be sure to wear bright colors (blaze orange) accordingly during hunting seasons as much of the climbing is on PA State Game Lands.

The main footpath is Top Rock Trail. It starts at the Top Rock lot in the east, goes to Top Rock, and then goes south to the Hangar 18/Mill Road parking.

Teddy Bear, Top Rock, the Glass Wall, Area 15, and Hangar 18 are all along Top Rock Trail.

Hobo Trail is reached by going through Teddy Bear, and further north.

The Caves Trail is a cutoff that avoids the summit. Caves Trail (east) leaves Top Rock trail before Teddy Bear, connects to Gateway, reaches the Caves, passes under the River of Rocks, then Caves Trail (west) returns to Top Rock Trail about halfway between Area 51 and Hangar 18.

NO CAMPING ON STATE GAMELANDS.

The nearest climbing store and guide service to Haycock is the Doylestown Rock Gym. It's only a short detour if visiting Haycock. They seem to be the best place to look for the current guidebook, and may offer other information, too.

Circa 1970s: Pete Cody and Ed Vansteinwick were early climbers to establish and document routes at Haycock (per Holzman).

2000s: Char Fetterolf has established and published problems up to V12.

2002: Char's first edition of "A Bouldering Guide to Haycock Mountain."

Char's latest information is available as a digital guidebook within the Gunks+ app: gunksapps.com/haycock.html

Use Top Rock for most Haycock areas.

Off of RT 563 turn north onto Top Rock Trail Road. About a mile down on the left is a small parking area. Follow the obvious singletrack hiking trail up to the Trail-split Boulder; go left at this junction for the Caves Trail East, and right for other areas.

After this, trails are generally poorly marked. Look for cairns and blazes on trees.

Use Mill Road parking for Hangar 18.

Off of RT 563, turn north onto Harrisburg School Road. Turn right at Kinzler Road. Pass a stop sign, park in a small lot on the left, and follow a trail to Hangar 18, the Caves Trail West. and other bouldering areas.

This was found at Bokow. This is not okay and m… 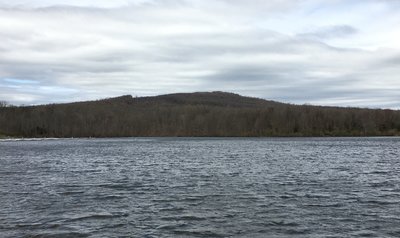 Haycock Mountain as viewed from the shore of L… 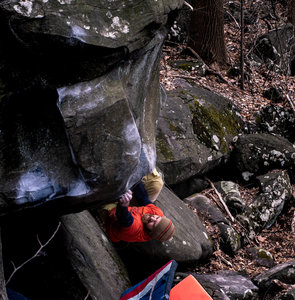 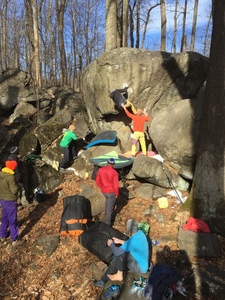 Haycock is the place to be on a sunny winter da… 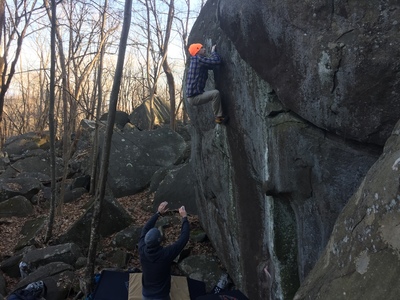 Haycock has some nice highballs. Finishing up C…

All Photos Within Haycock Mountain (Nockamixon)