From Graystone to the Guardian, this is yet another of the fabulous Quartzite Peaks also known as The Grenadiers. As with all of the peaks of this sub-range, it is a pretty mountain, standing third from the end above the north fork of Trinity Creek. With Silex and the Guardian nearby, but more difficult to access, Storm King's proximity to the northern terminus of the Needle sub-range accentuates its position in the San Juans. Indeed, the quad is named after this illustrious mountain. Additionally, it is blessed with a "flower-strewn path of a route" up an imposing, but nice, north face climbed by Bob Bliss in the '70s. By the way, this is one of the few north faces in the Rockies with only one route.... Its unnamed neighbor to the east, peak 13,405, also has a nice northern aspect waiting for first ascentionists. The walk up on the south side begins at the saddle with Peak Eight. It is well cairned. The southeast ridge, with initial climbing moves over a step, later has portions of scrambling over steepish sections. The northeast ridge was climbed by Mike Vanderbeek in the '90s, but information about it is lacking. During a Super-Alpine section of an XT 30-day C.O.B.S. course, Marcus Brown, with students, climbed the northwest ridge as well.

Up Elk Creek, find the trail up to Vestal drainage, continue all the way east past Lake 12,396, and over an improbable looking pass between Points 13,085 and 13,241. There is nice camping with great views of north faces near the tarns around 11,800. To contour around the northeast ridge to get to the southeast ridge or the walk up, there is an obscure trail at about 11,820. It's cliffy, but soon rises up through talus above Silex Lake. If hiking down the Molas switchbacks or taking the train in is unappealling, one can hike over Hunchback Pass, down the north fork of Nebo Creek to Vallecito Creek. Before the confluence of Trinity and Vallecito Creeks, find the crossing well below the falls; a trail bears west staying north of Stormy Gulch rising up to the aforementioned tarns. 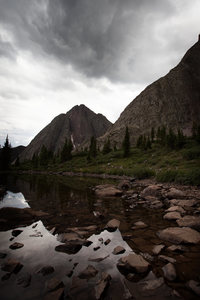 Storm King in back. 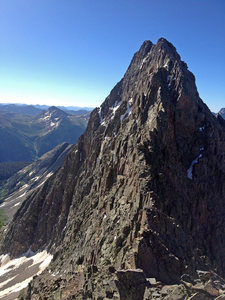 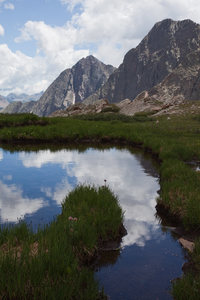 Storm King in back again. 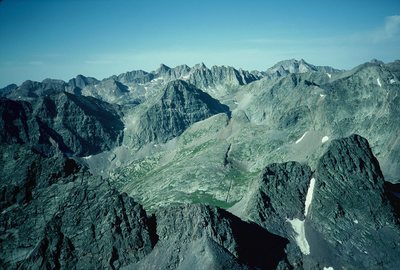 Looking south to Leviathan and Jagged. 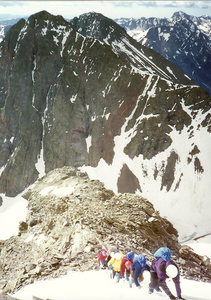 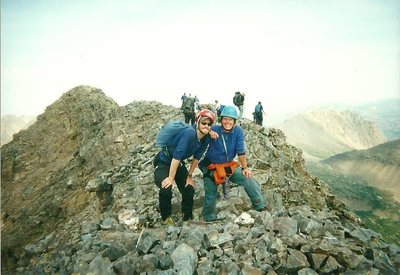 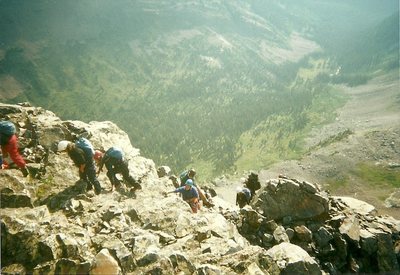 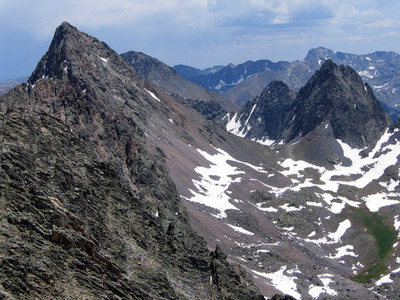 All Photos Within Storm King