Areas in Area A

Access Issue: Most of these boulders are within the Mt Evans Wilderness Area, regulated & patrolled by the US. Details

Most boulders are located within the Mt. Evans Wilderness Area, regulated & patrolled by the USFS. Climbers should be on their best behavior, practice Leave No Trace. Please abide by these requirements: it can take vegetation decades to recover from damage. Place crash pads judiciously, & keep brushing to a minimum. Before adding new lines, considered the damage that may be caused by additional foot traffic, pads, etc.

Chalk is unsightly to non-climbers. Please avoid chalking up boulder problems that are visible from the Chicago Lakes Trail, & in general, keep chalk use to a minimum. Brush all tick marks off after every session. Use containers that prevent chalk spills & if you do spill, clean it up.

Stashing crash pads is forbidden by the USFS. Pads will be confiscated.

Noise: this is a Wilderness area that is enjoyed by many, mostly non-climbers. The last thing passing hikers want to hear are f-bombs, iPod speakers, grunting, etc. In fact, most other CLIMBERS don't want to hear any of these things either. The easiest way for us to lose access is to elicit complaints from other user groups.

Dogs must be leashed at all times, they scare wildlife. Obviously, clean up after your dog.

Remember we are guests in this area. Be respectful of other users & the USFS Rangers that manage this area.

Area A is the most well-known area at Mt. Evans, home to numerous classic problems such as Seurat, Bierstadt, Timeline, The Ladder, All Dogs Go to Evans, The Dali, and No More Greener Grasses. The approach is just awful, which makes it relatively pleasant compared to other Mt. Evans areas. The scenery here is magnificent and really adds to the allure. Since this is by far the most visited area at Mt. Evans and many of the boulders are in vegetated areas, please be extra courteous and respectful of other users and the fragile alpine environment.

Park at the Echo Lake Picnic Area. Follow a nice gravel path to the west side of the lake, where a signed trail for the Chicago Lakes heads off to the southwest. Follow this trail for a few hundred yards over a ridge, into the Chicago Lakes Basin. The trail traverses along the valley wall for a while, and then drops steeply towards the valley floor, through a series of switchbacks. Once at the valley floor, the trail crosses a creek, then joins an old dirt road. Turn left at the road, and head steeply uphill towards the reservoir. There are a few boulders along this road. The Roadside Boulder sits right on the road, on the left just before reaching the reservoir. Once at the reservoir, the trail flattens somewhat. Follow the road to the southwest corner of the reservoir, past two cabins, to a signed trailhead for the Chicago Lakes. Stop here and fill out your free wilderness permit. Follow the Chicago Lakes Trail through undulating terrain for several minutes. You will pass a nice looking block (the "Trailside Boulder") on the right in a nice meadow. Five minutes after passing the Trailside Boulder the trail forks. Head left, through the meadow at this fork. The main Chicago Lakes Trail continues to the right, passing a small stand of aspens.

Follow the trail through the meadow, across two make-shift bridges, then into the woods on the opposite side of the meadow. The trail winds through the woods for a few hundred yards, passing two more boulders in the meadow on the right (The Willows Boulders). About 3 minutes after the trail fork, this trail heads straight into the Bierstadt Block. Pass between the small cleft formed by the Bierstadt Block & its southern neighbor to reach a nice cirque of boulders with numerous classic problems such as Timeline & The Ladder.

To reach Pink Fink, Seurat, and the Dali, continue Southwesterly through/over this group of boulders, and pick up the trail again just past the Ladder. On the left is the overhanging arete of Random Progression. Head right around a large flat boulder, then after ~20 yards you will run smack into the North Face of the Pink Fink boulder, featuring Snow White V7 & Pink Fink. The towering highball Peasants Into Leaders is on the boulder just East of the Pink Fink boulder. Head west (right) around the Pink Fink boulder, and follow the trail towards the woods. Once in the woods the trail goes right past the East side of the Seurat Boulder. Continue further on this trail, SW for a bit, and then steeply uphill to the SE, to reach the Dali.

Classic Climbing Routes at Area A

Mountain Project's determination of the classic, most popular, highest rated climbing routes in this area.
More Classic Climbs in Area A »

Area A Map. Not necessarily to scale! Not all… 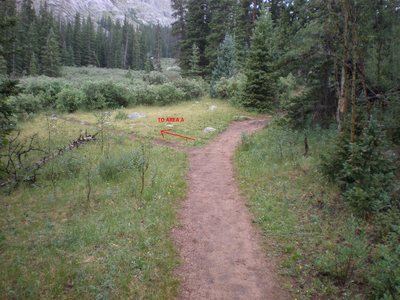 Here's where you diverge off the Chicago Lakes…

All Photos Within Area A


More About Area A