The cliff band is on private property and has recently changed hands, which created some potential access issues. There are a number of "No Trespassing" signs on the land.

The owner of the property is alright with climbers being there. However, the "No Trespassing" signs will stay up, and are only there to "protect himself."

The landowner has also said that he is very pleased with what he's found out about the climbers and the etiquette of the area. He researched it online and found that we've always been very respectful of our privilege to climb there and that we value that privilege greatly.

With that being said, Bozoo is fair game for climbing. AS ALWAYS: BE RESPECTFUL OF THE PROPERTY AND THE AREA. NOT DOING SO COULD RESULT IN ITS PERMANENT CLOSURE.

Short cliff band outside of Bozoo, WV at the Shanklin's Ferry campground. Rarely crowded with a decent variety of routes. Most of the routes are south facing but are shaded well by foliage in summer. Routes here are generally Trad or Mixed with an occasional Sport climb. Top-roping is often easy to setup and is a great place to learn, as well as push your limits. Several of the climbs have rap anchors in the popular areas. The code of ethics is Traditional. If you wish to do any development it is asked that you reach out to those who have come before you and work out a plan. There is room for all to share a vision at this nice little crag!

Paul Sullivan created an awesome topo that many of us had poorly copied versions of "back in the day." Ian Herring dug up an early clean version and scanned it in, Paul has typed on top of that many of the lines climbed in his groups last round of development as well as the few lines that have gone up since. Utilizing this topo in combination with the info in this database should assist your efforts in exploring the lesser known climbs of the area. It prints well. FYI, there are still errors, and some of the TR projects have since been led, but it is a great start and we will continue to polish this pebble over time. Paul's Bozoo Topo

The rock type is often thought to be the same as found at the New River Gorge: Nuttall Sandstone. Actually the rock found at Bozoo is technically part of the Hinton Formation. It often is more compacted than the rock at the New, often creating a smooth bullet hard patina. Geology Formations

While Bozoo is considered an excellent "local" crag. The bouldering is above and beyond your average run of the mill local spot. The deteriorating cliff band has provided us with 2.5 miles of boulders and "mini-cliff" made of coveted, bullet hard, fine grain, sandstone. Many people have experienced samplings of the Main Area below the Iceberg Wall. Areas have been developed from Shanklin's Ferry road all the way till the boulders finally stop appearing several miles down stream. The rock is generally featured, but you do not find an over-abundance of holds. This creates an excellent bouldering experience where problem solving is crucial. You will find all kinds of problems here, but it is amazing how many beautiful lines exist here in the V4-V8 Range. At this time there is one hard test piece "Bozooka, V11". opportunity awaits for additional hard lines for someone with the psyche!

Tricky - use the GPS location or the mobile app!

Going West on 460 from Blacksburg. Turn Right on Rt 219 at Rich Creek, Va. (just past the town of Narrows and a really curvy section of road along a rock cut). Follow 219 as it makes an immediate right then an immediate left. Go 1.75 miles and turn Left onto Rt. 12 about a half mile after the Family Dollar store. Go 1.1 miles then take a slight Left onto Bozoo Rd. (no sign) just past a sharp righthand curve and Stanley Hill Rd. (If you start going up a long hill, you have gone too far). Go 5.5-6 miles then take a slight Left onto Shanklin's Ferry Rd. at the Bozoo Christian Church that is on the righthand side of the road. Go 1.7 miles to a sharp righthand curve followed immediately by a sharp lefthand curve then .4 miles later stay left onto Shanklins Ferry rd. at the Shanklin's Ferry Campground and WV State Park sign. Go down the curvy hill .9 miles to a slight Right onto a gravel road. A sign there directs you to a Boat Launch, Beach, and Playground. This is just past the sign stating that Beer and Alcohol are prohibited in the park. Follow Gravel road .6 miles to the Self Register Kiosk and then go right. Park on the lefthand side of the road just before it curves left, across from campsites 78 and 79. The trail leaving the campground from behind campsite 79 goes to the downstream areas (Simpson's, Bovine, Bond). The trail leaving the corner of the field approximately 100 yards to the right of campsite 79 goes to the upstream areas (Savory, White, Iceberg, and Necro).

Mountain Project's determination of the classic, most popular, highest rated climbing routes in this area.
More Classic Climbs in Bozoo » 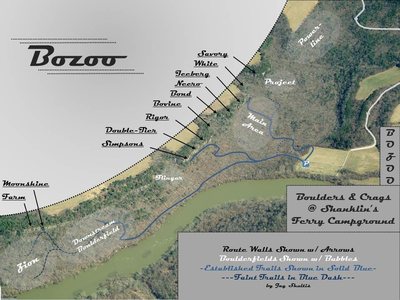 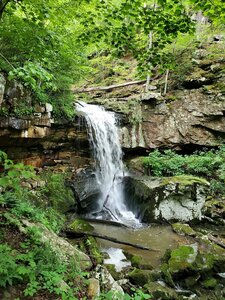 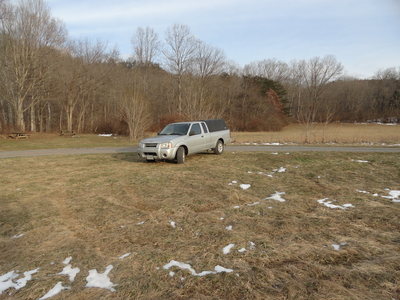 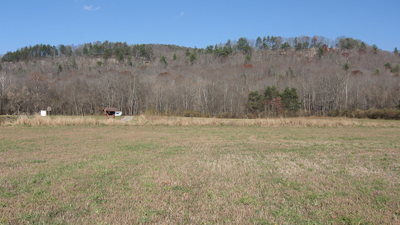 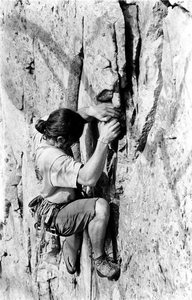 An early ascent of the Birth Canal, originally… 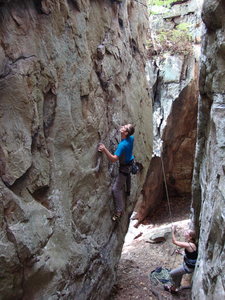 Stefan on the iceberg