Routes in The Punchbowl

The cave occasionally has a waterfall that fills up the bowl at the base, hence the name.

There are now more than 10 routes at the cave and to the right, from 5.9 to 5.hard.
Left of the cave, in the trees, are some 10/11s, and some harder routes further left (perhaps a dozen or so routes). Not much is known about these lines yet, except that Luke Laeser and Co. put in a handful, and the rock looks really good, for the most part.

There are a handful of quality lines here. Right of the Punchbowl are a number of routes. Corporate Greed is a short, fun 5.9, ****. I've heard tell Spiked Punch (12c, ****) is a classic, I think Drive by Shooting (11d/12a, ****) is definitely a worthy route. Turds in the Punchbowl (12a, **) is worth getting on for the stiff crux up high. Several (relatively) new routes can be found by following the trail around the corner to the right of Turds.

Smoke on the Water (11c, ****) starts on the left side of the cave and is super fun, with a finish that arcs right over the top of the cave.

There are a two bolted lines on the right arch of the cave that look really hard. According to the 2008 Guidebook from Wolverine Publishing, these are 13c & 13d.

At the end of the east access road, there is a trail that takes you directly to the Punchbowl, with a quick approach. This is the obvious cave.

More routes to the right.

Editorial note: there appears to be only 2 "vertical" routes between the cave & "Corporate Greed;, though this lists 3. I am not sure what the deal is with that.

Classic Climbing Routes at The Punchbowl

Mountain Project's determination of the classic, most popular, highest rated climbing routes in this area.
More Classic Climbs in The Punchbowl » 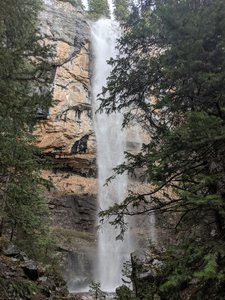 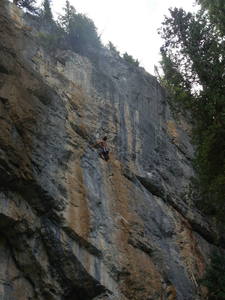 Chris Deulen running it out between bolts 8 and… 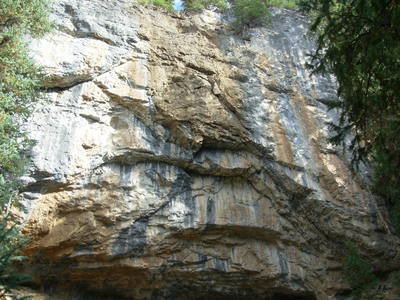 The main wall of the Punchbowl, of which climbs…

All Photos Within The Punchbowl


More About The Punchbowl