Eldorado Canyon State Park has closed the upper loop of the Rattlesnake Gulch Trail above the Crags Hotel Ruin and Continental Divide Overlook in order to protect golden eagles nesting on the south side of the canyon. The closure also includes the Continental Crag climbing area.

All activities, including rock climbing and hiking, are prohibited in these areas through July 15, 2020 or until further notice. This closure was authorized by Park Ranger D. Bergman.

Golden Eagles are protected by the U.S. Fish & Wildlife Service under authority of the Bald and Golden Eagle Protection Act and the Migratory Bird Treaty Act. A conviction of nest disturbance can carry a fine up to $5,000 and one year imprisonment.

Per Mike McHugh: until July 15th, Continental Crag is closed for eagles.

A pair of nesting golden eagles have been spotted by Christian Nunes, wildlife biology tech, OSMP. Thus, the Continental Crag and the upper loop of the Rattlesnake Gulch trail have been closed.

These are thought to be different birds than those who were nesting previously in the Diamond Head/SOBO Buttress area/ridge.

Continental Crag is another "wilderness setting" within Eldorado canyon. It is a place where you can go and climb, and count on being alone. In all of my time in Eldo, I have never witnessed another party there. There is a string of crags upward in elevation on the South side, extending up in elevation, from Lower Peanuts Wall, to Upper Peanuts Wall, to Continental Crag. Continental Crag is the highest in the string, and while quite wide, is not terribly tall, as the bottom of the formation is not very good. The upper section, particularly of the Southwest end, however, is quite good. Despite its size and solid rock, perhaps due to the longer approach and lack of development or protection, it does not see much traffic, even on holiday weekends. The setting is a nice, and somewhat unique, perhaps due to the combination of its North by Northwest aspect and its relatively high elevation. From a distance, at almost any angle, the dihedrals and roofs of Continental Crag are obvious. Many went for years without ascents and have only recently been attempted or climbed. Continental Crag faces Northwest and gathers light later in the day. The sun rarely breaches the face in the winter, and snow collects and remains at the base well into the spring months. The climbs mostly involve moderate to hard, (but well protected) crack climbing, such as Paradise Lost (5.8), Plate Tectonics (5.9), Continental Drift (5.10d) or Primal Scream (5.11d). There is now some harder face climbing established between horizontals, such as Rift Of Consciousness, (a 5.11, S). None of these has or should be bolted, as they were lead from the ground up on trad gear. There is a fair amount of wide crack to be had, so if you hike all of the way up there, take a few larger pieces (up to #5 Camalot or a few big bros). Some recent development has resulted in some other new routes, such as Welcome to Eldo (5.10, OW)

Descent: To descend after climbing, S/SW (up the ridge and to the climber's right) to a fixed rap, or walk left down the ridge to below, in the notch between Upper Peanuts Wall and Continental Crag. This walk-off requires some easy scrambling, but like the crag in and of itself, is not a place for inexperienced climbers.

Approach as for Upper Peanuts Wall, but continue up the cliff line base until the crag is in full view. From the top 1/3 of the base, walk up and left on ledges and scramble to the base of the solid rock. This will put you just NorthEast (above) the start of Continental Drift, and Southwest (below) Primal Scream. This approach should take about 45 minutes. 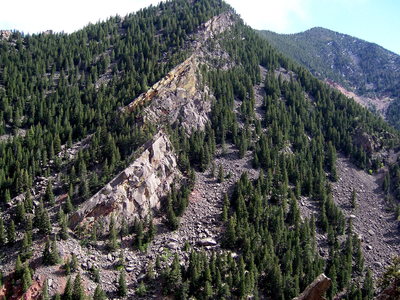 Peanuts Wall, up to Continental Crag. 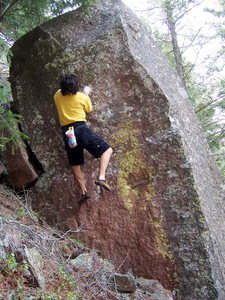 All Photos Within Continental Crag