Routes in The Veil

The Veil is a rare "wilderness setting" within Eldorado canyon. There is a string of summits extending from Rincon to the north/north west, including Cadilac Crag, The Veil, Physical Crag (and Split Block), Diamond Head, and Sobo. The Veil is the largest of these, being a full two to three pitches tall and quite wide. Despite it's size and solid rock, perhaps due to the longer approach and lack of development or protection, it does not see much traffic, even on holiday weekends. The setting is a nice, and this is one of the best places to go to get away from the hordes that sometimes end up in Eldo.

From a distance, at almost any angle, the Veil looks like a massive castle, with a flat wall in the center and two huge turret-like towers, one on either side. The Veil faces Southwest, and gathers light later in the day. The climbs mostly involve either moderate and runout face climbing, such as Silver Threads, (a 5.8 S) or hard and runout face climbing, such as Forever, (a 10c VS). There is one token crack and corner climb, Wanderlust, a well protected and enjoyable 5.6. All 8 of the known routes on this rock are starred routes in the local guidebooks, but none see much traffic.

Descent: To descend after climbing, walk left off of the top to the north, and then back down to your packs. This is an easy walk-off and should take about 5 minutes.

From the Eldorado Canyon Train, sating as for Rincon or Cadilac crag, passing the Rincon cut-off. Continue on the trail until you are directly below The Veil, then scramble uphil over talus to reach the base. This should take about 45 minutes.

Per Tony Bubb: The Veil is not in Eldorado Canyon SP and is not under their jurisdiction. 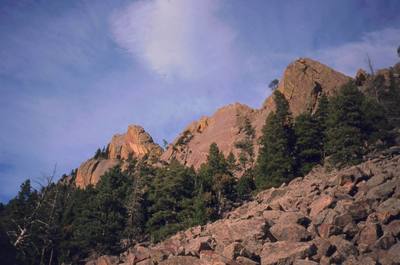 The Veil (near) and Physical Crag (more distant… 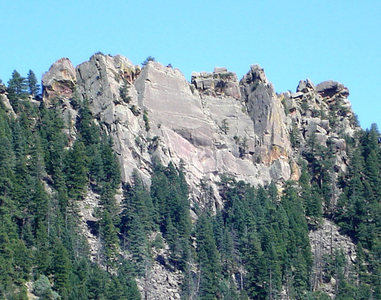 The Veil as viewed from the west 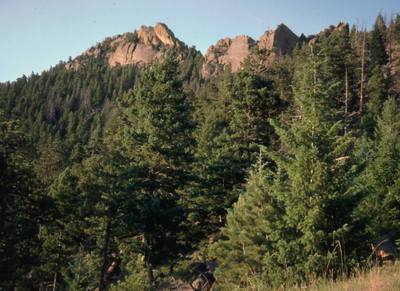 The Veil (right) and Physical Crag (left) as vi…

All Photos Within The Veil


More About The Veil