You can read about the warning here. There is extensive rebolting being done by the Thaitanium Project, which has already rebolted the vast majority of popular routes in the main areas. Be informed!

Easy jugs lead to the first sling (needs replaced). Step right, clip a bolt and head up the arete. At the ledge a couple bolts later, either head straight up (careful of the ledge) or step left at slight easier.

The guidebooks mention this route works back left to top out the same as Humming a Song, however two new bolts (ti glue in) continue straight up the bolt line to a good anchor.

Short and Easy is a good/obvious route to locate on this wall. Several meters right, there's another 5.8 looking climb (really, one of the only ones at this grade) on a subtle arete called the playground. A few meters and routes further right past a shallow alcove is the start of humming a song and scorpion. Humming goes straight up and scorpion heads right. This is several meters left of the Escher cave.

Several titanium glue in bolts and one mangy sling 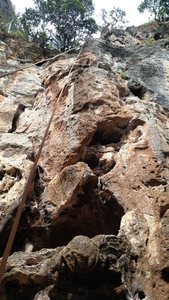 Route. Humming goes straight up the left side o…