The best line on the wall climbs a sustained 45-degree-overhanging arête to the top of the cliff. The rock looks questionable from below, but it’s actually the most solid of the steep lines. The climbing is sequential and gymnastic on large, generally incut holds. Expect heel hooks, toe cams, and campusing between jugs.

The climbing begins easily up a hanging open book. Clear a slight bulge to gain an easy slab and then a no-hands stance on a sloping ledge. Move left to the speckled-purple arête, then make big moves to reach a horizontal break below the crux. Make a big reach to a hidden jug, then campus out the lip of a big ledge, eventually mantling onto it for another good shake. One last long span leads to more good jugs at the anchor.

It is the second line from the left, or the left-most line ascending the big overhangs, beginning up a purple open book.

7 bolts to a 2 bolt anchor. A stick clip is mandatory. Don’t feel obligated to follow the bolts directly at the start—they were placed where the rock is best, not necessarily where the climbing is best. 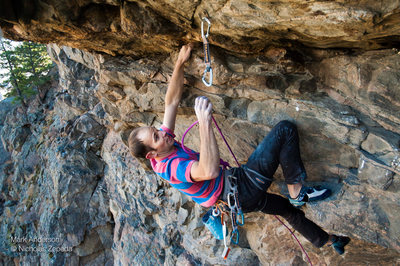 More About Strapped With Lats